The opening editorial from the May 2021 issue of Lion’s Roar. 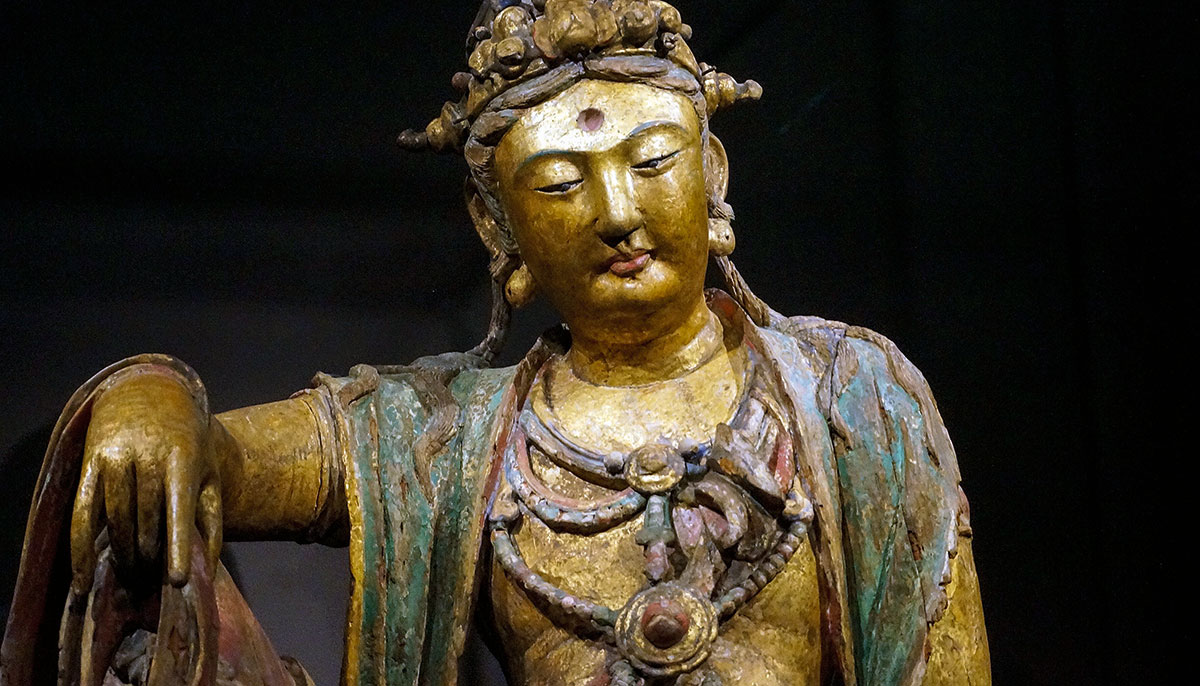 In 2019, I visited the Museum of Fine Arts in Boston, the home of a larger-than-life sculpture of Guanyin, the bodhisattva of compassion.

The statue, carved from paulownia wood and dating back to twelfth-century China, came to the museum in 1920. It was moved to a storage room in 1999, where it sat deteriorating for fifteen years until a donor offered to sponsor its conservation.

It took conservators eighteen months to restore the statue. Layer by layer, they carefully removed paint that had been added over centuries, uncovering beautiful gold, green, and red adornments. They employed UV imaging and x-radiography to uncover the statue’s history. A plastic jewel on her forehead, placed between her glass eyes in 1950 for a television segment, was removed. Finally, nearly seventeen years after her last public appearance, Guanyin was reinstated in the museum in 2016.

We can chip away at our attachments, ignorance, and anger, revealing our innate buddhanature.

When I came upon the statue myself, I was taken aback by its presence. This Guanyin sits in her classic posture of royal ease, measuring nearly six feet tall. From behind museum glass, she radiates a brilliant light, her gentle eyes gazing down at those standing before her. The room around her echoes with a recording of the Great Compassion Mantra, which is synonymous with Guanyin and often uttered before her image for protection and purification.

Standing before this 900-year-old statue, it struck me how ancient, yet ageless, Buddhism is. I thought of the countless people who have worked throughout history to continue the Buddha’s teachings and spread them throughout the world. I gave a silent thanks to Guanyin and all who led me to stand here before this great bodhisattva of wisdom and compassion.

The “Explore Buddhism” section of this issue focuses on women in Buddhism. There, you’ll learn more about Guanyin, as well as two other female bodhisattvas, Tara and Prajnaparamita, who also made the vow to forego enlightenment until all sentient beings are saved. You’ll find stories of remarkable Buddhist women from the time of the Buddha to the present day, alongside profiles of five modern-day bodhisattvas engaging in important work on behalf of women.

This issue also explores the three poisons inside us, and in society, that Buddhism identifies as causes of suffering—anger, attachment, and ignorance—and how to free ourselves from them. Like removing the plastic jewel from the forehead of an ancient statue, Buddhist practice can help us shed the parts of ourselves that feel inauthentic. Bit by bit, layer by layer, we can chip away at our attachments, ignorance, and anger, revealing our innate buddhanature beneath. Like removing the many layers of paint on an antique statue, with careful attention and persistence, our awakened mind is uncovered.