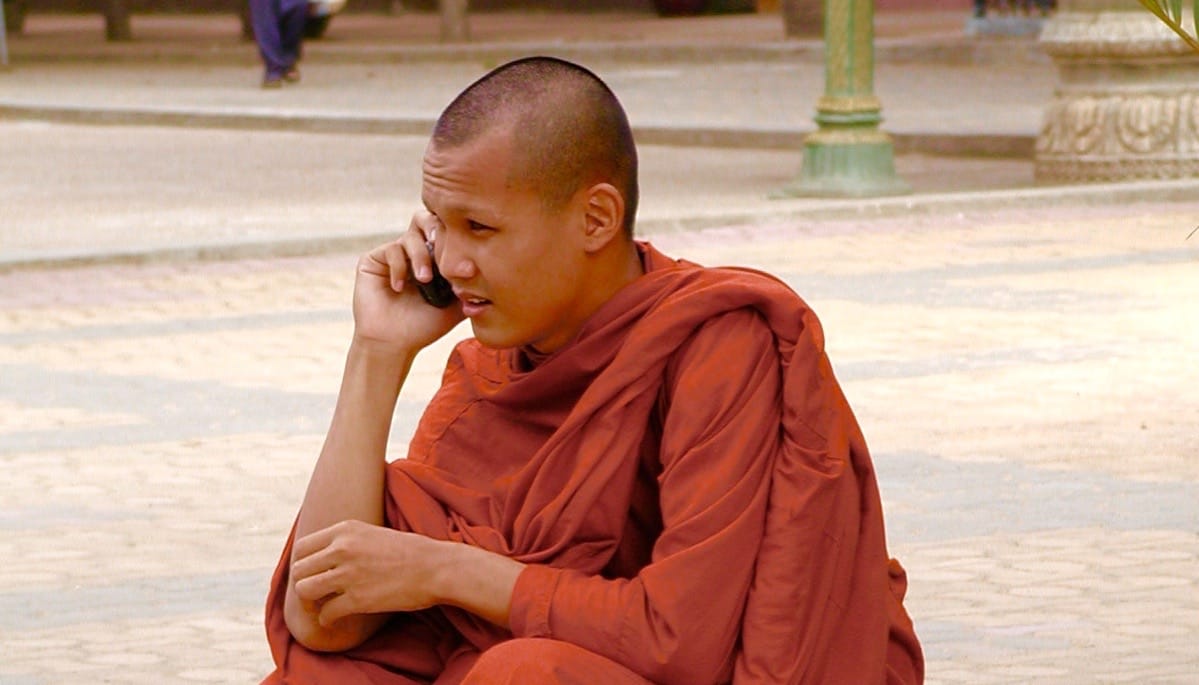 There is, Brad Warner says, "a generalized idea of how Buddhists ought to look, sound, and behave. And when we don’t live up to these idealized images, look out!" Photo by Beth Kanter.

Have you ever had that accusation thrown in your face? Brad Warner has, and it’s made him think about what it really means to act like a Buddhist. It’s not as simple as right and wrong.

The other day, someone who attends the zazen classes I lead told me about an argument she’d had with her boyfriend. At one point in the argument, her boyfriend pointed out something she’d done and said, “That’s not very Buddhist!”

How often have all of us heard that one? These days the average person has been bombarded with enough media images of what the folks in Hollywood think Buddhism might be for pretty much anyone to start believing they know exactly what it means to follow in Gautama’s footsteps. Whether it’s Yoda from Star Wars, or Kwai Chang Caine from Kung Fu, or that supposedly Buddhist guy in the tissue commercials who gets horrified at the thought that his medicated hankies are killing poor innocent germs, it all filters into the generalized idea of how Buddhists ought to look, sound, and behave. And when we don’t live up to these idealized images, look out!

Few of these images were created by people who have the slightest inkling of what it really means to follow a Buddhist practice. Most of these caricatures are based on fragmented impressions of Buddhist philosophy filtered through the distorting lens of the Judeo-Christian dualistic outlook. Yet our friends and families often expect us, as flesh and blood human beings, to live up to these highly idealized and unrealistic images. As if anybody could be like that—or even aspire to such a thing!

Those of you who’ve read my books and blogs know that my own particular mode of expression is more likely than most to strike people as “not very Buddhist.” But all of us are subjected to this to some extent. So what do we do about it?

It’s useless to try to explain what Buddhism actually is to someone who’s not sincerely interested. In Zen there’s a saying that you shouldn’t try to answer a question about Buddhism until the questioner asks at least three times. No one I know follows that literally. But I find it’s a good rule of thumb not to talk about Buddhism to someone who shows no more than cursory interest. It doesn’t do a whole lot of good to try to encapsulate 2,500 years of philosophy into something the guy at the desk next to yours can digest as he waits for the person he’s calling on his cell to pick up.

On the other hand, even when someone who doesn’t know dip about Buddhism tells me I’m not being very Buddhist, I always take the statement seriously. Sometimes they’re perfectly right. Sometimes they’re not. Even when they’re wrong it may, in that situation, be better to do something different. That still may not be something they’d consider “Buddhist.” But that’s of no consequence. Other times they’re just dead wrong, and I need to continue to do exactly what I’m doing.

Because this is the case, there are times when the most truly Buddhist thing to do will strike those who have no experience treading the path as “not very Buddhist.” But we should never let our fears about being criticized by friends and family who don’t understand what Buddhism really is to stop us from acting the way we know a Buddhist should.

Yet it is hard to know what to do sometimes. This goes for novices and so-called “masters” alike. That’s what the precepts are for. They give you something to fall back on when your intuition in a given situation seems to have failed. One of the problems we face as Buddhists in a Judeo-Christian society is that while the precepts sound a bit like the Ten Commandments—we’re not supposed to kill or steal and stuff like that—they actually come from a very different perspective.

The Ten Commandments are a warning from an all-powerful, all-knowing God, eternally separate from ourselves, not to do certain things or else He’ll kick our asses. The Buddhist precepts are reminders to trust our own intuitive sense of right and wrong. They list a few common circumstances in which the proper way to behave is usually to follow a certain course of action, because there are very few cases when it’s right to steal or kill and so on. But even these are not absolute, and there may be rare times when the gravest precepts must be broken in order to do what is truly right. The precepts are meant as examples to show us how intuition usually works in these cases, not a set of rules we must follow to avoid Buddha’s wrath. Like our intuitive sense, the precepts come from ourselves.

Our intuition never actually fails, even though we often think that it does. We only fail to hear it over the noise we generate in our heads. Our practice is intended to allow for the development of an intuitive sense of what should and should not be said or done. We all have this intuition. But we’ve learned how to shout it down with our thoughts and emotions to the extent that it’s sometimes impossible to hear that still small voice.

In the end, Buddhist practice really is just that—it’s practice. We’re practicing to be Buddhists, hoping someday we’ll finally get it right. If we ever stop practicing, if we ever get to the point where we think we’ve got it all down pat and there’s no need for further improvement or refinement, that’s where the trouble starts.

When I attended a precept ceremony at the San Francisco Zen Center recently, I was struck when the teacher asked the students if they would vow to keep each of the precepts “even after attaining buddhahood.” This is an important attitude to cultivate. There will never come a time when we don’t have to keep strict watch over ourselves at every moment. Dogen said that our life is one mistake after another. The fact that we make mistakes isn’t so important. What counts is that we try and fix the mistakes we’ve made and try not to make the same mistakes in the future. All we’ve got to work with is this fleeting moment, right here, right now. Even our deepest regrets about the past can’t do a damn thing to change it. We find our balance, lose it, and find it again. Over and over. Every day.

The results of this practice may not strike everyone as how they envision a Buddhist ought to behave. But that can’t be helped. When I lose my balance and say what shouldn’t be said or do what shouldn’t be done, it is my duty to put those things right as best I can. Sometimes that means apologizing. Sometimes a spoken apology is the worst possible response. It’s up to me to make my best effort to sense what the situation dictates without letting my own ideas get in the way.

We don’t exist for the sake of ourselves but for the sake of those we serve. At the same time, we have to remember that the two are not really separate. When someone tells us that what we’re doing is “not very Buddhist,” we’re sending ourselves a message. Our practice will never make us perfect, when perfection is merely an image created by thought. Real perfection is just to keep on practicing.