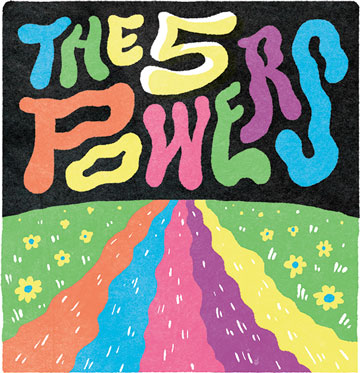 The five powers are a set of qualities that work in a sequence to support awakening.

The five powers (Pali: pancabalani) are one of the seven sets of qualities that are conducive to awakening. Also known as the five strengths, the five powers are:

The five powers work in sequence: Faith in the dharma creates energy, which in turn makes it possible to be mindful. Mindfulness leads to deep concentration, which finally gives rise to wisdom.

They are called powerful because they master their opposites. Faith controls doubt; energy controls laziness; mindfulness controls heedlessness; concentration controls distraction, and wisdom (or discernment) controls ignorance. When the five powers are well-developed, the mind isn’t bound by these negative energies and understanding and compassion flourish.

The other qualities that are conducive to awakening are: the four establishments of mindfulness; the four right exertions; the four bases of supernatural power; the five spiritual faculties; the seven factors of enlightenment; and the noble eightfold path.