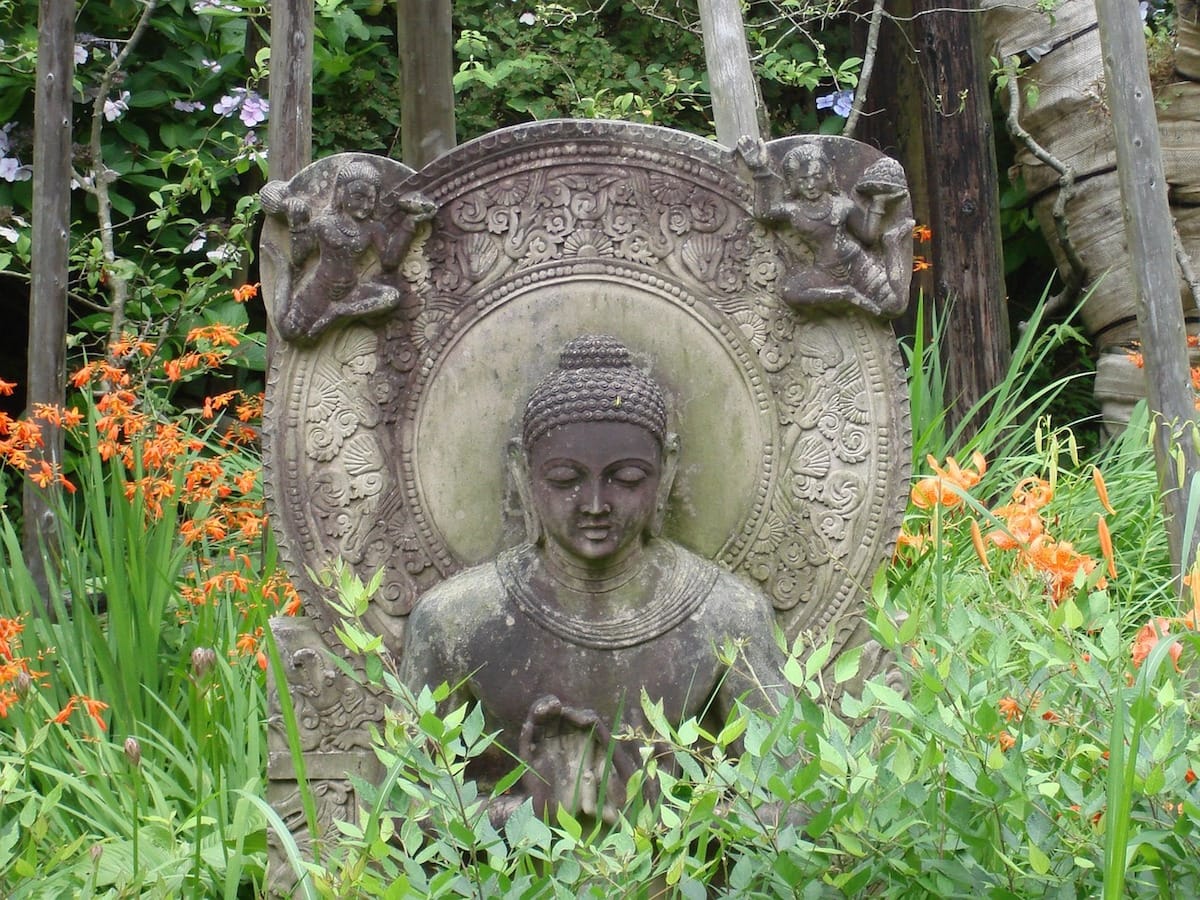 According to Sakyong Mipham Rinpoche, to have the definite intention to emerge from samsara is an act of warriorship, a way of dealing with our fear of death.

At the heart of the Buddhist path is the understanding of samsara. This is the endless cycle of suffering to which all beings are subject as long as they believe they possess a self that is real.

What can we do about this? To begin with, we can commit ourselves to the path of waking up from our view that the self is real and in need of constant protection. Making this commitment begins with hearing the teachings of the Buddha and the instructions for meditation. Having found the teachings and the practice to be valuable, we feel confidence in the path we’ve discovered and in our own ability to follow it.

Buddhists have a ceremony for officially entering the path of meditation. It’s called “taking refuge,” and it involves embracing the Buddha as an example, the Buddha’s teachings as a guide, and the community of other Buddhists as helpful, supporting companions on the path. And what are we taking refuge from in such a ceremony? From this endless cycle of frustration—of seeking pleasure and trying to avoid pain. We recognize that this approach, ironically, only brings more pain.

What does it mean to take a vow of this kind? It means we acknowledge and renounce with conviction the cycle of suffering. It means that we’re giving our allegiance to something worthwhile, something that we’ve found to be true and wholesome and good. We have decided to take this path because we recognize that it leads to a place where we can flourish. Making this declaration enables us to begin to break our negative patterns and to develop the helpful qualities that we all possess inherently.

This intention is called ngejung in Tibetan, which translates as “definitely arising,” or “definitely emerging.” We are definitely emerging from samsara. This is a brave act. Taking this step is often referred to as entering the path of the warrior. We don’t mean warrior in the fighting sense, but in the sense that the warrior is heroic and courageous. The warrior-meditator’s job involves clarifying and subduing one’s own misunderstandings. It means overcoming fear.

The Buddha, our first object of refuge, was an example for this kind of warriorship. He traveled on the path of awakening and overcame all sorts of difficulties. He demonstrated that fixation on the self can be overcome. He was brave enough to take a stance against materialism and his own attachment to pleasure. If we emulate him, we are emulating a being whose mind and actions were in accord with reality, who was not simply following the endless cycle of samsara.

We call the Buddha’s voice the dharma, our second object of refuge. He expressed his mind to others by showing them a practical way to achieve selflessness and to understand emptiness. He gave us instructions for realizing the profound meaning of every possible situation.

The community of people who study and practice the Buddha’s teachings, the sangha, is our third object of refuge. As a group, the sangha keeps alive the instructions from the Buddha. Fortunately, because of the sangha, we don’t have to be alone on our spiritual journey. None of us is perfect, but because we agree on the truth of the Buddha’s teachings, we share a view of one another—and of all beings—as having basic goodness. In fact, we can see all beings as buddhas.

It’s helpful to contemplate the meaning of these objects of refuge. We can’t fully understand them from reading books. We need to try out the instructions for ourselves and work with our own mind to understand their deeper meaning. In this way, we take a simple, intelligent approach to the path. We think it over again and again. If it consistently makes sense (or makes progressively more sense, as is the case for a lot of us), we build up our conviction and our personal discipline by holding to principles we know are sound. And if we lose our conviction or forget why we have taken refuge, there are reminders such as impermanence, aging, sickness and death all around us.

Taking refuge ultimately asks us to overcome fear—including our fear of death—by closely examining it. Dying is terrifying because the consciousness loses the support of the body. There’s an unparalleled sense of loss and disorientation. But if we examine further, we must ask, Who is it that experiences this disorientation? Which part is “me”? Who dies? The mind consciousness is said to consist of thoughts, memories and dreams. Does that collection make up “me”? And if we cannot find a “me,” what is there to protect or be fearful for?