Garry Shandling, the legendary late comedian, was known to be Buddhist — but rarely spoke of it. In this Lions Roar exclusive, Shandling’s friend, the Buddhist monk Brother Phap Hai — who spoke at Shandling’s Hollywood memorial, as seen in Judd Apatow’s new HBO documentary, The Zen Diaries of Garry Shandling — shares personal stories about Shandling’s Buddhist practice and his devotion to Zen master Thich Nhat Hanh’s teachings and community. 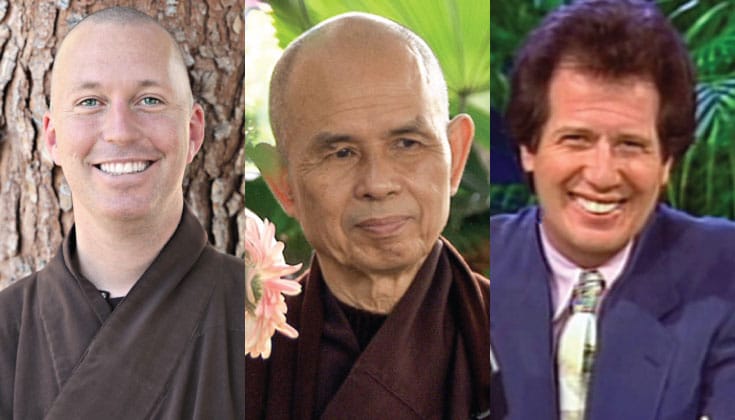 After sixteen years and countless thousands of meditation practitioners who have spent time in our mountain sanctuary, every patch of earth, every tree, every rock holds a memory, a story.

As I walk around Deer Park Monastery, often I recall our dear brother Garry Shandling, the funny, complicated, profound man whom I am proud to call brother.

Garry came into my life and into the life of our community close to two decades ago when he helped to found Deer Park Monastery, a monastery under the spiritual guidance of the Venerable Thich Nhat Hanh (affectionately referred to as “Thay”), and he visited and practiced here on numerous occasions. He had a very deep connection with Thay and with Sister Chan Khong, and with brothers and sisters in our community. In person, Garry was kind, humble, and real. He put you at ease immediately, and had the most penetrating insight.

Garry’s work was to bring healing to the world through laughter and comedy.

The last time we saw Garry in person was a few months back, when he traveled to San Francisco to visit Venerable Thich Nhat Hanh, who was recuperating after his stroke.

A journal entry of Garry’s sums up how I myself experienced him:

Give more to others. Get outside “yourself.” Keep your heart open and have fun. Keep mind clear. Make it fun for them. Open heart, kindness, truth, compassion. Follow your instincts.

Although Garry had been dealing with health issues in recent years, his sudden passing came as a shock even to those closest to him. Having had the privilege to practice together with Garry, along with members of my community, I attended his private cremation and was invited by Judd Apatow to share a few thoughts during Garry’s public memorial at the Wilshire Ebell in Los Angeles on Sunday 24th April.

Over five hundred well-known comedians, actors, actresses and politicians attended the memorial. Each of the speakers shared what we all felt: that we were Garry’s family, and that we had all felt so loved, so cared for by him. He was always there for us. He never said no.

I was the nineteenth speaker. I shared a few of my personal thoughts of Garry and read a message from the Plum Village International community:

“I can guess what you must be thinking: what on earth is a Zen Buddhist monk doing on stage at Garry Shandling’s memorial? Good question. Garry’s work was to bring healing to the world through laughter and comedy; he brought healing to himself through his sincere spiritual practice. At the same time, as Kevin Nealon just shared, those of us who knew Garry well know that he was also always interested in real estate! I often think about this as I walk around the 600 acres of nature reserve in the greater San Diego area.

“Before I continue, I feel I have to circle back to the comment that was made at the beginning of the evening that Buddhism doesn’t work. I couldn’t agree more! As a wise person once said: ‘Buddhism promises nothing and delivers exactly that.’

Garry said that all of his comedy springs from his meditation practice.

“We sat in meditation with Garry, we walked with him, his laughter echoed among our mountains; we scrubbed pots with him, we shared from the heart and we cried with him.

“In Zen, one of the highest compliments we can offer a person is to share that they are a Real Human Being. This describes Garry perfectly. He was always there for me, and for each of us, in so many ways — and I am proud to call him my friend and my brother.

“In 2003, Garry traveled to Washington DC to introduce Thich Nhat Hanh before Congressional members, and said that all of his comedy springs from his meditation practice.

“Referring to Thay, Garry joked, ‘Thich Nhat Hanh is a special man who has helped millions with their suffering through teaching them mindfulness. But he doesn’t know real suffering, because he hasn’t dated as much as I have.’

“Afterwards, as he sat quietly drinking tea with venerable Thich Nhat Hanh, Thich Nhat Hanh turned to him and said, ‘Garry, you really know how to work a room!’

“This wise, humble, warm, compassionate, and funny man is deeply missed. In the dining hall of our monastery is one of my teacher’s calligraphies — it reads: The tears I shed yesterday have become rain. This is the feeling I carry in my heart this evening as I look around this room and see each of you, and the way that Garry is continuing in you.”

I would like to end by sharing a message from the Plum Village International Community:

Back to Mother Earth’s embrace you return. There is truly no coming, and no going.

Your heart full of humor and charm continues now in the wild yellow dandelions and the gentle white clouds rejoicing in the coming of the Spring. We will always be grateful for the depth of your meditation practice and for all of the help and sacrifices you made to help our community establish Deer Park Monastery, which is now a place of refuge for thousands of people.

We remember when you appeared in front of the San Diego city planning council to champion for our teacher and how the council members were moved and charmed by your love and support for our community, saying that it was a blessing for the city and state to have such a gentle group of peace loving monks and nuns to want to reside there and make their home.

You even gave them many of Thich Nhat Hanh’s books and encouraged them to read them because they helped change your life. You eloquently introduced Thay at the Library of Congress during our visit to the US Congress.

We see you sitting with Thich Nhat Hanh on the mountaintop drinking tea and enjoying a moment of silence and rest. We still hear the echoes of your laughter among the sagebrush.

Now the children and coyotes, the sage bush and granite boulders, the clear starlit sky and the radiant sunrise all have a place, a home for refuge, thanks to your effort.

You also continue in these beautiful things – our laughter, our tears, our joy and freedom, our gentle steps and peaceful breath.

You go nowhere. You are within each one of us and now you are everywhere.

You have arrived. You are home.

In love and gratitude,

Your brothers and sisters of Plum Village International

Originally from Australia, Brother Phap Hai is a senior student of Zen master Thich Nhat Hanh. Prior to becoming a monk, he trained as a chef. Brother Phap Hai is known for his ability to convey complex teachings in an accessible and humorous manner and leads retreats and workshops throughout the United States, Canada, South America, Australia, and Asia. He currently resides at Deer Park Monastery, in California, where he breathes, walks, and smiles on a regular basis. He is the author of Nothing to It: Ten Ways to Be at Home with Yourself.