With his city under curfew following protests for George Floyd, Sensei Alex Kakuyo takes a walk and is stopped by police. 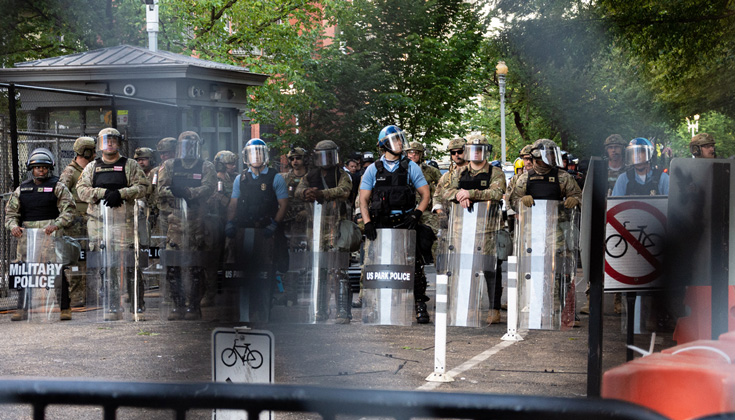 In Pureland Buddhism, we’re taught that the world is both a land of suffering and a wish-fulfilling jewel. Through the grace of Amida Buddha, and teachings like those found in the Meditation Sutra, we’re able to see beauty in the midst of our pain.

Of course, this doesn’t mean that we no longer experience suffering. Rather, it means that our relationship to suffering changes. We see every hardship as a teaching, and we learn to appreciate the many gifts (healthy food, clean water, indoor plumbing, etc.) that we experience every day.

For example, until recently I didn’t realize what a blessing it is to go outside; to leave my apartment and just stand in the sun for a while. But that changed when my city was placed under curfew. We had a large protest for George Floyd recently, and the entire area is on lockdown.

I didn’t realize how precious walking in the sun could be until an officer told me I couldn’t.

Checkpoints are set up on all of the streets leading out, and no one can come in unless they can prove residency. Police officers on horseback and motorcycles do regular patrols.

The hardest part of curfew is the rules keep changing. One minute we’re told things will only be this way for a day, the next minute we receive a text saying the lockdown will last all week. People are told that curfew starts at one time, and then they’re told another. Everyone is confused, and no one can get a straight answer.

I’m feeling tense, and I decide to go for a walk and take pictures. I recently took up photography as a hobby. And I find the act of framing the perfect ‘shot’ to be meditative. So, I grab my backpack, filling it with a couple of granola bars and some bottled water, and leave my apartment.

I walk around the city, taking in the strange mix of destruction and repair that’s infected it like a disease. I take pictures of trees and busted out windows; pigeons and broken glass in the street. The sun feels good on my skin, and the tension that I’ve been carrying for several days starts to subside.

Then I turn a corner and run into approximately ten police officers. Four of them are standing in front of a humvee. They’re wearing camo and tactical gear similar to what I wore when I served in the Marines. Riot shields and helmets are leaned up against a nearby building. The other six are spread out between three police cruisers; lined up one behind the other.

I nod at them and attempt to cross the street, but one of the cruisers pulls up to block my path. “Where are you going, son,” a police officer with a mustache says from the passenger seat. I tell him the apartment complex where I live. “Is that for work or for home,” he asks. As he says this, a second cruiser swings around to block me in from the right side.

My pulse quickens as I recognize what’s happening. We practiced this exact maneuver when I trained for my deployment to Iraq. By creating an L-formation with their vehicles with the detainee (me) at the center, the officers are providing cover for themselves for when they disembark their vehicles. Also, they’ve set up excellent lines of fire. In this position, if they decide to shoot me, they can do so without risk of hitting each other.

My brain freezes for a moment as I try to bring myself back to reality, “Work and home,” I mutter. I try to explain that I’ve been working from home for the last three months due to Covid-19, but it’s too late. The four officers get out of their vehicles.

“Do you mind if I search your bag, one of them asks. My mind flashes to all of the “know your rights” videos that I’ve watched on YouTube. I picture libertarians explaining how I should always ask, “Am I being detained?” during an interaction with a cop; reminding me that I don’t have to give them permission to search my things.

Then I think about George Floyd lying facedown on the cement with an officer’s knee pressed into his neck. I give them my bag without saying a word.

I picture Tamir Rice. I picture Breonna Taylor. I take another breath.

“You know we’re on a curfew now,” an officer standing to the right of me asks. “No,” I respond, “I thought that didn’t start until 7 pm.” “Nope, he said, “It’s all day now.” I take a moment to process what he just said. “So, we’re not allowed outside?” I ask. He shrugs his shoulders in response.

“This is your warning,” the mustached officer says as he hands me my bag, “Don’t let us catch you out here again.” Anger wells up in my chest. The last time someone talked to me that way I was a 9-year old boy, and my grandfather was scolding me for trampling his tomatoes.

Now I’m a grown man… still being scolded like a child. Buddhist training keeps me alive in this moment. Instinctively, I begin taking meditative breaths. Focusing on the feeling of air in my chest helps the anger subside. I picture Tamir Rice. I picture Breonna Taylor. I take another breath.

“Don’t worry,” I say quietly, “you won’t.” I make a bee-line for my apartment when the officers drive away. I don’t take pictures. I don’t see the birds. I don’t feel the sun on my skin. When I get inside, I stand next to the window and look out at the trees and the clouds. I put my hand on the window that separates me from them.

The window is thin, frail, I could break it without much effort. One piece of glass separates me from the outside world, but it feels like a million miles.

For all my training, I didn’t realize that “outside” is a gift. I didn’t realize how precious walking in the sun could be until an officer told me I couldn’t. As I look up at the clouds, I promise to never make that mistake again.

Several hours later, I look out the window and see a woman power-walking down the street. She doesn’t have a care in the world as the sun reflects off her glittery yoga pants. “Doesn’t she know we’re on curfew?” I wonder.

Two officers on horseback approach her going in the opposite direction. She smiles and waves without breaking stride. The police don’t give her a second glance.