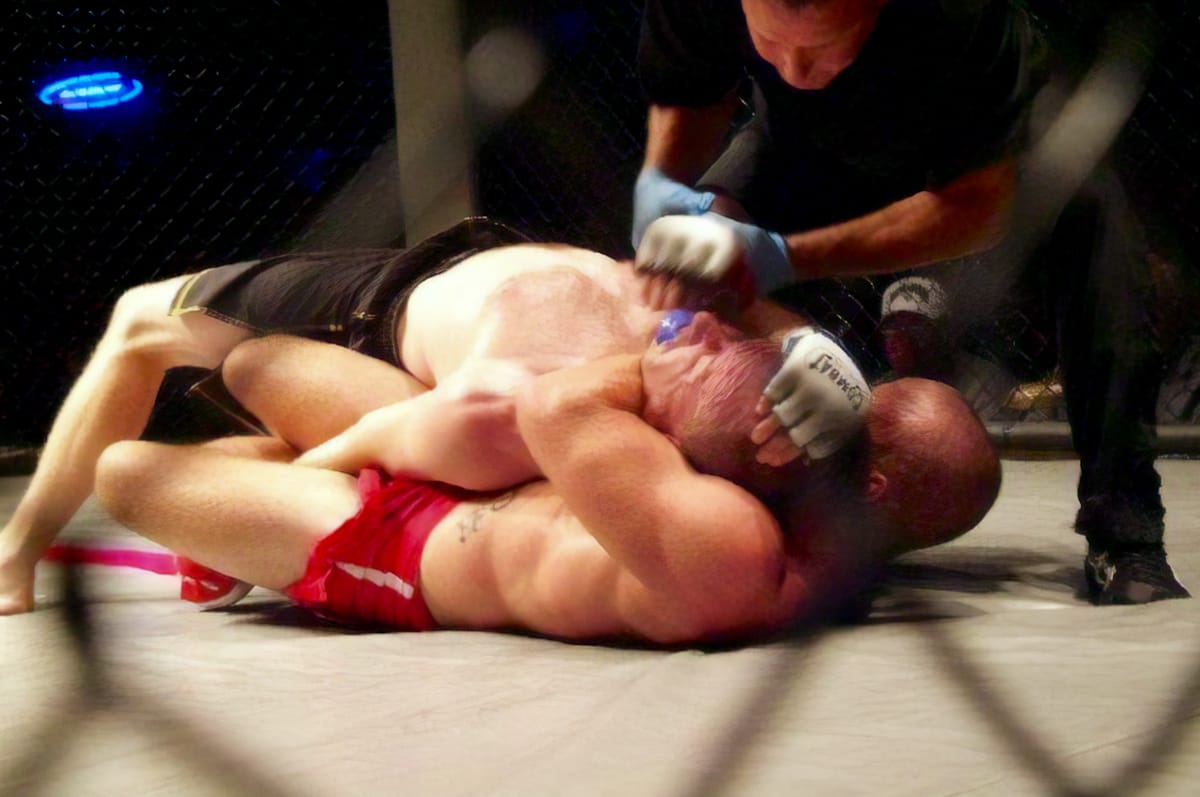 The author gripping his opponent in a choke hold.

For many years, my childhood abuse simmered as rage within me at all times. Memories of feeling helpless and neglected haunted me. I couldn’t stop them from replaying in my mind and I didn’t have the tools to separate those replays from the reality before me.

With memories of abuse came an energy of abuse — a quiet desperation, a relentless itch, which would consume me. Unless I acted.

I started training in martial arts at age twelve at the boxing club in my hometown, Altoona, Pennsylvania. Over the years, I trained with some of the world’s greatest fighters and learned important lessons about respect, trust, and work ethic. But it would be more than a decade before I learned — while on retreat with Thich Nhat Hanh — that fighting never transformed my trauma. It just transferred it into something else.

So, on top of my fight training routine, I’d also train whenever I felt those energies creeping in. Eventually, to excel, I learned to self-trigger, intentionally summoning dark memories to access those abusive energies, which I thought I needed to fuel another brutal training session.

My first glimpse of the danger of my unresolved issues came at the conclusion of my second pro fight, after nine years of training. I countered my opponents punch and snuck around to his back to sink in a chokehold.

I choked him unconscious and didn’t let go until the referee pried my arms from around his neck.

In that moment, despite a sold-out venue of screaming fans, this wasn’t sport. I was choking my opponent to kill him. In that moment, I really believed he was my father.

Watching the replay, it became even more apparent. After I let go of the choke, I flexed and yelled, “I told you so!”

I wasn’t living in the here-and-now, but in the there-and-then. Once again, my conditioned habit of transferring my rage created a muddled, distorted sense of reality, with thousands of fans cheering on.

Years later, in 2013, I found myself on a mindfulness retreat with Thich Nhat Hanh, or Thay, as he is affectionately known. After two days in the retreat, my body was already breaking down from the long sessions of zazen — Zen sitting meditation. At the same time, the hounds of memory were surfacing. But, this time, I had nowhere to go. There were no heavy bags or mats. I didn’t want to disrespect Thay by abruptly leaving to go do sprints, which I kept trying to rationalize the need to do. 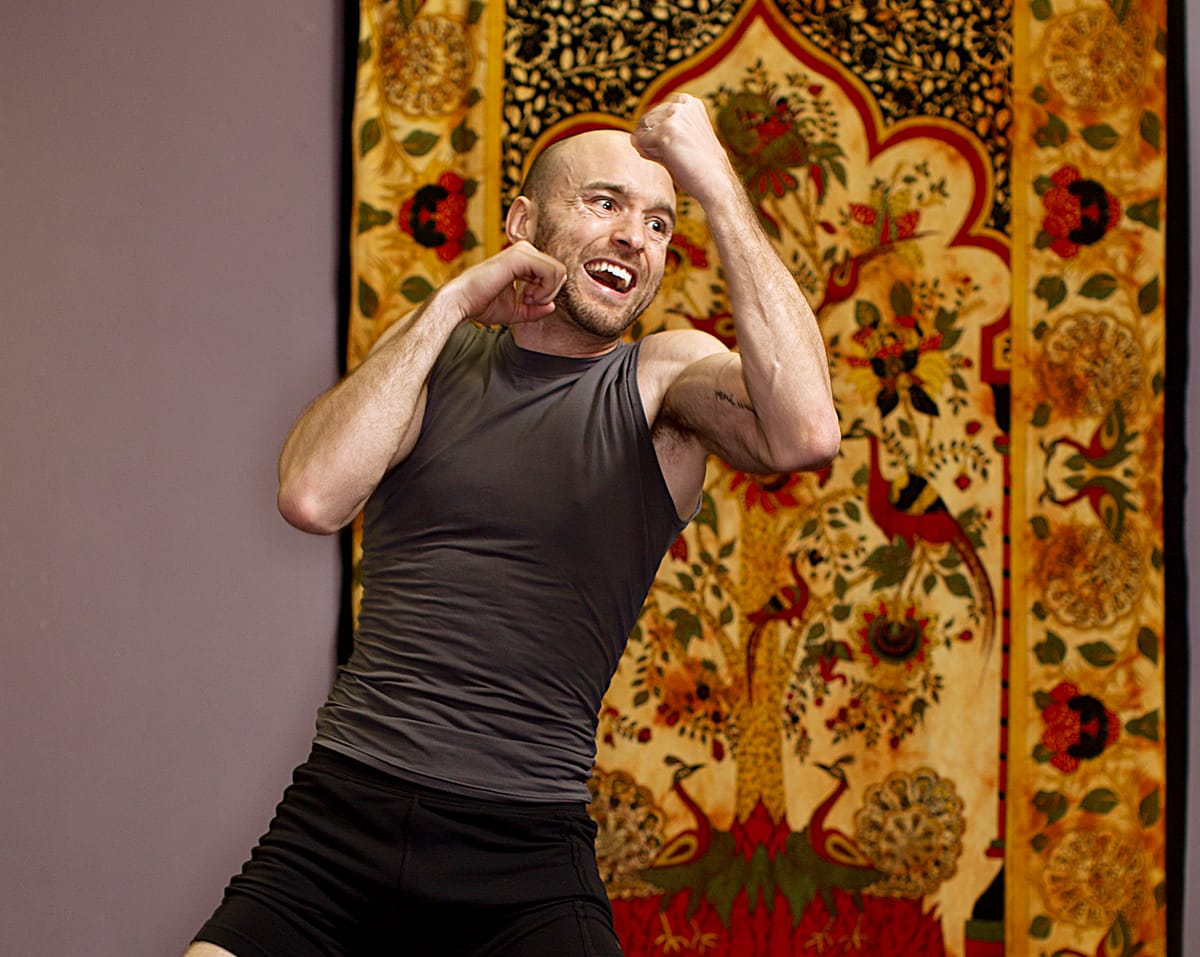 The author practicing an uppercut. Photo by Steve Boyle.

So, I kept sitting, even though my hips and back were on fire. I went into this familiar physical pain. I’d spent half of my life breaking my body down, subjecting it to physical pain — not to break other bodies in the cage, but to escape my other forms of pain.

In the sixth hour of zazen for the day, Thay led us through a guided meditation, and for the first time I found perspective on the story in which I was trapped. I wrote a poem about it.

For Thích Nhất Hạnh
For the first time your voice

unfurls as lotus into the sunlight
of my ears. No filter, no need

to plug in to listen—just you
two cushions away, guiding me

to the seed of my 12-year-old self,
and me, sitting here in Ayutthaya,

drifting back to Altoona, to wounds
I’ve painted over in thick brushstrokes,

to pants pulled down, the backhand
that bloodied my mouth, the helpless

watching as my sister took worse.
You tell me to see my father

as a 5-year-old boy picking up pebbles
in a stream. His hands are so small.

Minnows swirl around his bare feet.
He is so gentle. You tell me to see

myself as a 5-year-old boy, picking
up pebbles beside him in the stream.

Minnows swirl around my bare feet.
We are both so small; our hair so soft.

to land on the surface of a large stone.
He tosses first and misses. Then I toss

and miss. He tosses again and misses
again. I do too. We decide to leave.

My foot slips on green algae, he reaches
his hand out to me. You place your hand

on my shoulder. It is so warm. My eyes
are crusted shut from dried tears. They

open and you are there and I am here.
An hour has passed. You whisper:

When you stand please walk as though
your feet are kissing the earth.

When Thay put his hand on my shoulder I began to weep in a way I’d never known. For the first time in my adult life, I felt free from the shackles of my past, of the stories I carried like bricks. 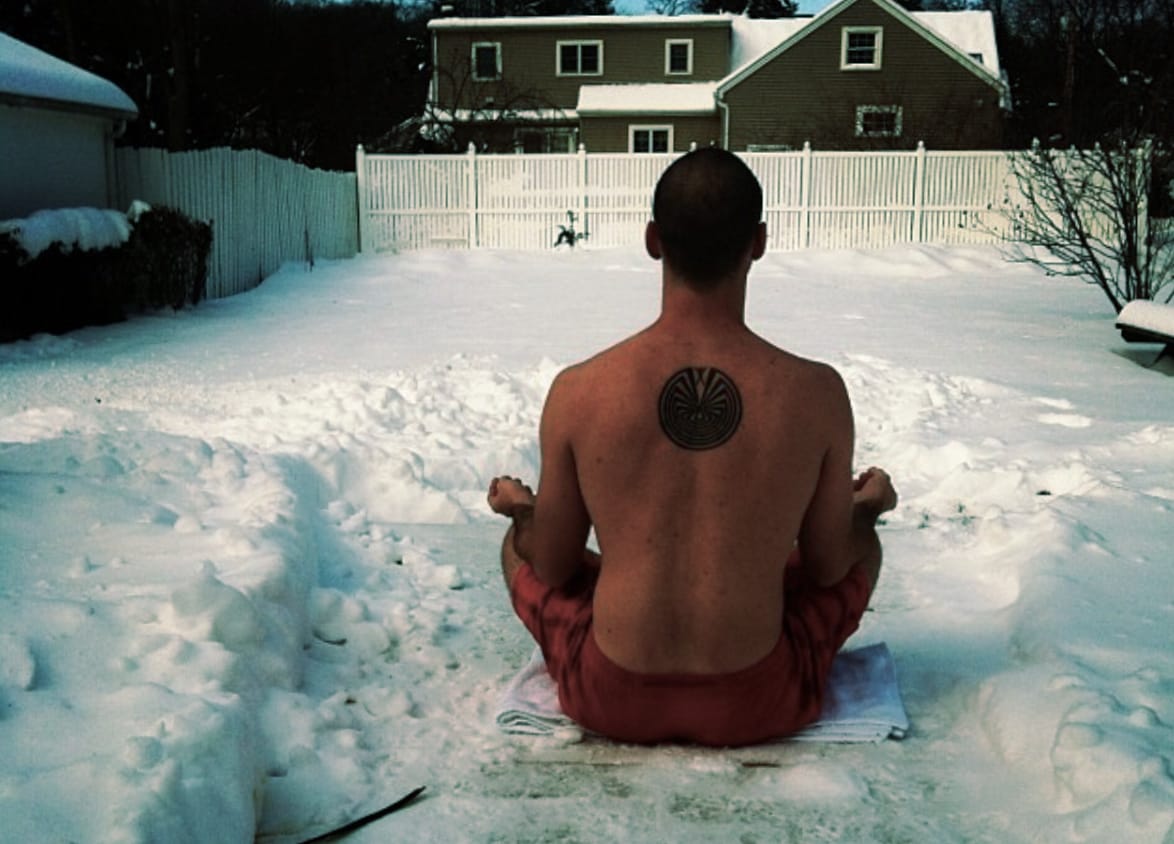 I’ve been meditating regularly ever since and have finally started to move into a transformative healing that encourages me not to close my fists, but to open, as a lotus.

Cameron Conaway is the Director of Marketing Communications at Solace and the author of Man Box, Poems (Lasting Impact Press, 2018). Connect with him here on LinkedIn.