Andrea Miller visits the ruins of Nalanda, the great university where much of what we know today as Buddhism was developed. 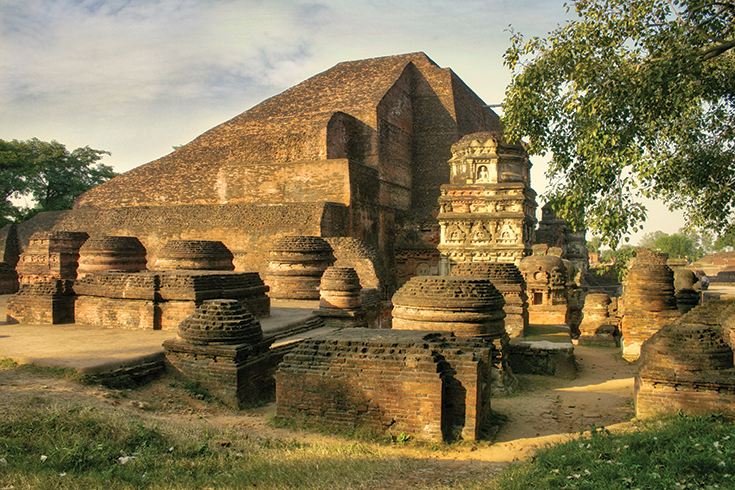 My high school was a brick building constructed some fifty years ago. As a result, I’ve long associated brick with every clock-watching hour I spent in that school and also—more generally—with dreary architecture of the sixties and seventies. If I’d been pushed to think about it, I’d have realized that bricks were far older than that, but I never really thought about it until I found myself sweating under the fierce Indian sun, surrounded by the seemingly endless, charred brick ruins of Nalanda Mahavihara.

Established in 427 CE, Nalanda was one of the first great universities in the world and it flourished as a Buddhist monastic university for almost eight hundred years. Located in the modern Indian state of Bihar, Nalanda had a profound influence on many aspects of Indian and pan-Asian culture, including pedagogy, art, and architecture. But for Buddhists, it’s an especially significant site. 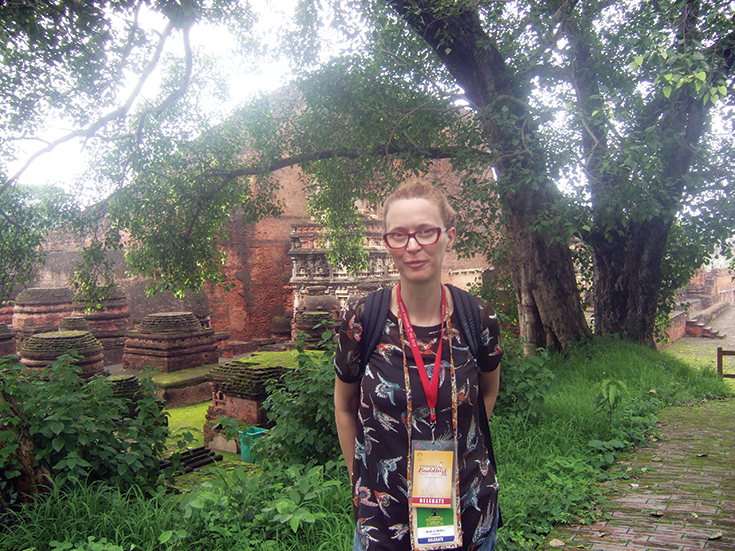 Andrea Miller at the site of Nalanda University, near present-day Rajgir. Photo courtesy of the author.

Important strains of Buddhist practice and philosophy were developed by the dedicated monastics who lived within Nalanda’s walls. Indeed, much of what we know today as Mahayana Buddhism came from Nalanda. As the Tibetan teacher Dzongsar Khyentse explains, “The majority of the Buddhist teachings that are still being studied and practiced in Korea, Japan, China, and Tibet were originally scribbled on scraps of paper by teachers and students from this university.”

Though Nalanda didn’t exist during the Buddha’s time, it was built on land he would have known, as he taught in a nearby mango grove. Shariputra, who was said to be the Buddha’s most realized disciple, was from the area, and his relics are apparently interred here in a stupa that was built in the third century BCE by the celebrated Buddhist patron King Ashoka.

My visit to Nalanda is in late August as the monsoon is just trailing off, so the grass and trees are a vibrant green contrast to the red brick ruins. Nalanda was laid out in tidy lines, and the ruins give me the feeling of being in a marvellous maze embellished with fine Buddhist art. I almost immediately get a little lost, but I don’t mind. I try to imagine what this ancient university would have been like in its heyday.

One seventh-century inscription dreamily described Nalanda as having “rows of monasteries with their series of turrets licking the clouds.” Another description from the same era claims, “An azure pool winds around the monasteries, adorned with the full-blown cups of the blue lotus; the dazzling red flowers of the lovely kanaka hang here and there.”

The campus had eight separate compounds, and included temples, meditation halls, classrooms, and a nine-story library that in its day housed one of the largest book collections in the world, including not just books about Buddhism but also secular material. What’s more, Nalanda had dormitories, making it perhaps the first university in history to house scholars on-site. 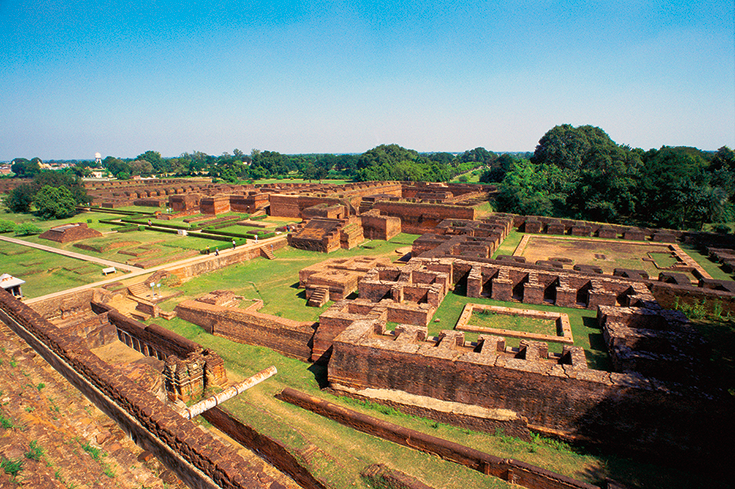 It’s believed that Nalanda had as many as ten thousand students and two thousand teachers at a time, and it was a truly international institution, attracting scholars and practitioners from such far-flung places as China, Tibet, Korea, Japan, Indonesia, Sri Lanka, and Turkey. In fact, much of what we know about Nalanda today comes from the extensive notes written by two scholars from China.

Admission standards were high: would-be students had to pass a challenging oral examination, and only one in five applicants were admitted. Shantideva, author of the foundational Mahayana text The Way of the Bodhisattva (Bodhicharyavatara) and the tantric guru Naropa, a founder of the Kagyu lineage of Vajrayana Buddhism, were just two of its notable alumni.

The campus had areas to study and other areas to practice, making it clear that both were viewed as necessary for a complete Buddhist education. While dharma was the primary focus, secular subjects such as mathematics, astronomy, medicine, art, and politics were also studied. It was at Nalanda that dharma debate came into its own, and from Nalanda the practice of debate was introduced into Tibetan Buddhism, where it’s still an important method to refine philosophical thought.

Nalanda grew over time. Monasteries, temples, and walls were added, and as the centuries unfolded, additional layers of brick were laid in order to enlarge structures, again and again. But as the Buddha pointed out, nothing is permanent. The growth of Nalanda eventually slowed, stagnated, and declined.

First, Hinduism experienced a revival, eclipsing Buddhism. Then, around 1200 CE, the Turkic chieftain Bakhtiyar Khalji attacked Nalanda. An account by one Persian historian suggests that Bakhtiyar believed he was capturing a fortress peopled by Brahmans with shaved heads, and it was only after these “Brahmans” were all slain that he realized it was a monastic university. In any case, the invaders destroyed Nalanda’s vast library, though a number of scholars did manage to escape with a few precious manuscripts. It’s claimed that the fires of Nalanda’s destruction burned for months.

Near the end of my Nalanda visit, I stand in front of its most arresting structure, Shariputra’s stupa, with its flights of stairs and stucco Buddhist figures, and I contemplate him as an actual human being. I think of all who taught and studied at Nalanda. They fostered a flowering of the dharma, which we continue to enjoy the benefits of. This is a place where Buddhists can pay homage to our ancestors, and feel our gratitude to them.

Someone points out to me that even today, many bricks at Nalanda are marked black from long-ago flames. Still, I think the brick has endured surprisingly well over the years, like the dharma that was taught and practiced here many centuries ago. I decide to let go of my prejudice against the material.