A young monk in Nepal practiced so many prostrations that he left his handprint pressed into a mat. Vanessa Sasson can’t forget him. 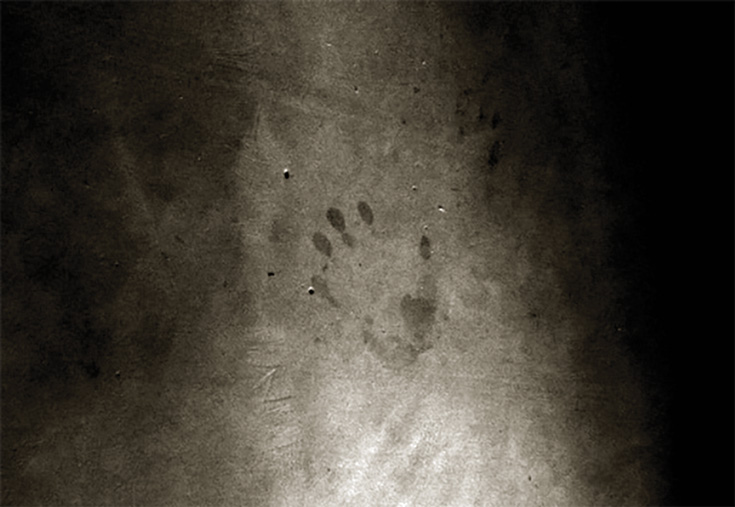 Photo courtesy of the author.

It was the winter of 2015, and I was in the Langtang region of Nepal.

The old woman of the house was nudging my elbow to get my attention.

“We have a cave just over our village where monks do retreats.”

That’s true of many villages. Caves dot the landscape of the Himalayas.

“Not so much,” was her evasive answer. In Himalayan terms, that could mean anything from a few minutes’ walk to a few days. Since I had students with me, there wasn’t much opportunity for a side trip. We were scheduled to return to Kathmandu in the morning.

“Thank you for telling me. On my next visit, I will be sure to go see.”

But then she leaned in closer. “It’s not far,” she insisted. “And there is a monk there. He is starting his three-year retreat.”

A three-year retreat is a very special event. For three years, three months, and three days, a retreatant isolates him or herself completely and concentrates on inner transformation. There is no contact with the outside world. Traditionally, the retreatant shouldn’t even see another human being during that time.

She was obviously proud that her local cave was in use. There is nothing quite so beautiful as knowing that a retreat is underway on your land. It fills the region with something magical, the effort undertaken seemingly seeping into the stones. Villagers point it out, urging their visitors into a special kind of awareness about their space.

“No, no, Sister. You don’t understand. He is there, but he hasn’t started the retreat yet. He is preparing. You can go see him if you want.”

Clearly, she had figured me out, because the next morning, I was up and on the trail before anyone else was awake. And she was right: it wasn’t very far. As the sun pulled itself out of the mountain range, I walked through a dense forest filled with white silk scarves—draped over branches, laid over bushes, stuffed into the nooks of trees. There were piles of mani stones on the ground and festive prayer flags fluttering overhead. I was in a landscape of blessings. A sacred space on a mountaintop.

A beautiful cave entrance was waiting for me at the summit. I stopped to catch my breath, overwhelmed by the majesty of the moment. Intimidated by it.

And then I heard singing.

I tucked myself to the side, not wanting to disturb. The old woman had told me that I could approach, but I didn’t want to. It was enough just to be close to someone who was dedicating their time that way—who was doing something I had never had the courage to try. I closed my eyes and let the experience wash over me.

How many prostrations had he done, I wondered? Enough to leave his handprint behind.

I don’t know how long I sat there, squatting by the side of the cave, disappearing into myself, but when I opened my eyes, he was standing right beside me. I was startled and stood up. Then I looked away, not sure if I was being intrusive. What was the appropriate etiquette in such a situation? I stumbled around in my mind, looking for the right way to handle myself.

He wasn’t flustered. He smiled at me. And he was so young! Maybe twenty or twenty-five? And he was dedicating himself to three years of isolation, to transform himself. To become a better version of who he already was. I felt so humbled standing before him, and so sad with myself that I had not done the same with my own life. Neither of us spoke. We just stood there. Then he picked up his prayers as though they had been hanging in the air between us, awaiting retrieval. He motioned for me to follow him as he sang.

He pointed to the entrance of his cave, inviting me to enter. Then he walked away.

I have been to many caves over the years. It is always a special experience, but I have never had the privilege of visiting a cave that was in use. My feet seemed anchored to the ground at first. I could not believe he was offering me a moment alone in his treasure house. I felt like I needed to part invisible curtains before I could step inside.

Very slowly, I walked in. I am sure that if I was living in that cave, the barrier I imagined was there would dissolve. But in that moment, there was a line demarcating the inside of the cave from the rest of the world, and I needed concentration to cross over. I sat down and breathed.

There was a meditation seat, some books, a shrine. The walls were covered with painted Buddhas. I wondered what the story was behind all that art. Was it produced by the retreatants? What kind of state were they in when they did it? How many hands had participated in its textured creation? I sat as still as I knew how.

But then I looked down and saw something that I will never forget. A thin foam mat, blue-green in color, lay unfurled by his meditation seat. It was like a well-worn yoga mat, and near the top of the mat, was his hand’s imprint.

He must have been doing his prostrations when I had arrived. How many had he done, I wondered? Enough to leave his handprint behind. For some reason, this filled my heart with emotion. I pulled out my camera and took a picture. I wanted to remember his hand etched into his mat. Apparently, I couldn’t rely on my memory for that.

I slipped out quietly and returned to the village that was just beginning to wake up. I cried the whole way down.

Two months later, I was listening to the news in my car on my way to work. An earthquake had rocked Nepal. It was the earthquake of the century and took nine thousand lives.

The mountain range of Langtang was decimated. I think he must have been in his cave when it happened.

Vanessa Sasson is a professor of Religious Studies at Marianopolis College and the author of Yasodhara: A Novel about the Buddha’s Wife.