Simplifying, forgiving, and letting go — Stan Goldberg on working toward the good death. 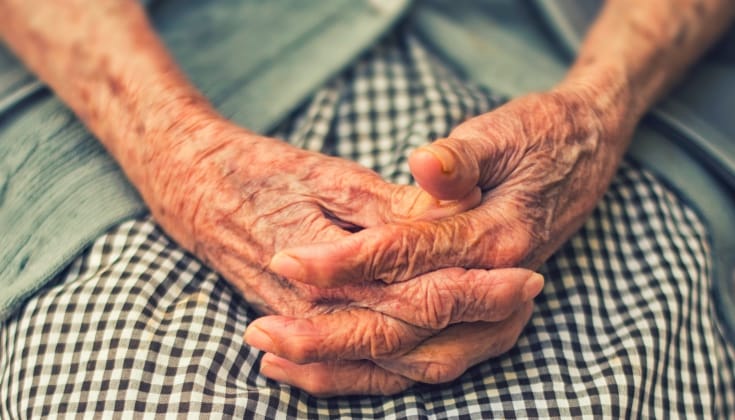 Imagine you’re preparing for a trip to a foreign country and you’re limited to taking only what can be carried in a backpack. Your decisions on what to take and what to leave behind will determine the quality of your experience. Too many items and the weight will be burdensome. Not enough of the right ones and you might be forced to neglect some basic needs. We make decisions of this type regularly. Take what’s important, leave behind what isn’t. But we tend to be oblivious to the importance of these decisions for the most momentous journey of our life—our death.

As a bedside hospice volunteer, I’ve found that the ideas and emotions people carry with them through life often determine the quality of their death. I remember my patient Joyce saying, “Dying is such hard work.” For months, her physical condition had been declining steadily, so I assumed she was referring to her pulmonary problems. But then she said, “I’m not talking about what’s happening to my body.” Pointing to her head, she continued, “The hard work is what’s happening here.” For most people, this work falls into four categories: the difficulty of simplifying the present, forgiving the thoughtlessness of others, wanting desperately to be forgiven, and letting go of dreams that will never be fulfilled.

I’ve seen many patients experience a stimulus overload as they get closer to dying. The CEO of a multinational company had difficulty deciding what he’d have for breakfast and a carpenter who built houses couldn’t complete easy manual tasks. For patients with dementia or other neurological problems, difficulties like these are organically based. But for people such as the CEO and carpenter, I believe the hard work of dying involves an information-processing problem: too many issues and not enough time to come to terms with them. Patients sometimes limit the number of visitors who come to see them in order to help with this overload. Others cut back on or eliminate lifelong interests, or decide not to talk about highly emotional issues. Anne, a well-known poet, chose a unique way of simplifying her life: she gave herself a going-away party. She invited friends to her hospice facility, and after everyone had told her how their lives were changed by knowing her, Anne called each person individually to her side. She whispered to each person and then gave them a single sheet of paper on which one of her poems was written. When all were given away, she said, “Now, I’m ready to die.” When Anne described the party to me, I asked if she could recite one of her poems. With a smile she said, “I can’t. I don’t own them anymore.”

The pain people experience from their past often follows them into death. This was true of Marie. I visited her weekly for five months, and every visit began and ended with her telling me the story of her co-workers’ cruelty. She spoke with such emotion you’d think it had been a recent event, rather than something that had occurred more than fifty years before. For Marie, the inability to forgive the unskillful acts and words of others made the time leading up to her death emotionally difficult. But for some people, such as Ned, it’s never too late to forgive.

I started visiting Ned almost daily after he expressed a fear of dying alone and asked me to be with him when it happened. Sometimes I visited for only a few minutes when he was heavily medicated, yet still showed no signs of actively dying. At other times, I stayed for hours as he alternated between rambling and lucid thoughts. His AIDS-related dementia worsened after three weeks.

“Carl, I’m so glad you came,” Ned said to me one day, his eyes unfocused. I had no idea who Carl was.

“I thought you wouldn’t come back.”

“I know it’s been hard on you,” he said, barely above a whisper.

“No, I enjoy coming to visit you.”

“You were right telling me to leave.”

“I shouldn’t have asked you to take me in. I didn’t have the right to ask anything of you. A father shouldn’t do that to his son.”

I didn’t know what to say. Continuing to insist I wasn’t Carl wouldn’t make any sense to him. He wouldn’t believe me. It appeared that he needed his son next to him. I asked myself if I should become part of his delusion—if ethically I had the right to do that. I was concerned, in the unlikelihood that his son or wife should visit, how they’d react to someone impersonating Carl. Or what if friends came and Ned told them about a visit from a son he hadn’t spoken to in years? There wasn’t time to get anyone’s advice.

“No, it wasn’t. I hadn’t seen you or your Mom in fifteen years and there I was, asking you for a place to stay. Asking you to care for me. You were right telling me to get out of your life.”

As I struggled to find my next words, his eyes seemed to focus and he said, “I forgive you.” Then, just as quickly as the delusion began, he drifted to sleep. I didn’t know the effect of my decision until the day of his death. When I entered his room, a woman was sitting by his side. I could tell by Ned’s breathing and fixed gaze that he was in a coma and actively dying. She introduced herself as a friend and said Ned had been lucid for a few minutes earlier in the morning and that he’d told her Carl had visited him. “Then,” she said, “He smiled and peacefully lost consciousness.”

Some patients feel they can’t be forgiven. Jim, whose family believed he was responsible for his daughter’s death, had difficulty with this. One night, after an hour of flailing and incoherent utterances, he said, “I know there are things I did that can’t be forgiven and I know some people are looking forward to dancing on my grave.” When I asked if there was anything I could do, he pleadingly said, “Shoot me.” Until the moment of his death, he rarely experienced any peace. But for other patients, self-forgiveness is possible.

Jean had abandoned her children and husband when her daughters were teenagers. Now, twenty years later, she was dying of emphysema and the only thing she wanted was her daughters’ forgiveness. Yet, despite knowing she was dying, they refused to see or talk to her. I suggested we write a forgiveness letter and Jean agreed on the condition that they’d only get it after she died. For three weeks, she dictated and I wrote. After many starts and stops and a ream of crumpled paper, we finally had something she felt good about. All of her hard work was contained in three sentences. “I’m sorry if I hurt you. Please forgive me. I love you.” It was enough to give her some peace before she died.

It has always been difficult for me to provide comfort to people who feel their lives have been riddled with unfulfilled dreams. Martha could only focus on the life she wouldn’t have with her lover, who was incarcerated and could only speak to her once a week by phone for fifteen minutes. When she started actively dying, her sister and I read her more than one hundred emails from people whose lives she’d enriched as a volunteer in a reading program. She never acknowledged any of the moving expressions of gratitude, but rather lamented having placed her life on hold for something that would never happen.

Fortunately, not all dreams go unfulfilled. Sometimes completing a simple thing can provide immense comfort, as it did for Vince. He was seventeen, a high school senior with cystic fibrosis, and had more unfulfilled dreams than memories. Vince, his family, and all his caretakers knew he wouldn’t live long enough to attend his graduation. His mother and his school principal arranged for a pre-graduation ceremony at the hospice where he was staying. Vince, who was propped up in bed, breathing through an oxygen mask and dressed in full regalia, was formally presented his diploma by the principal, as a small group of us applauded and cried. That one simple event may not seem significant in comparison with the number of dreams that wouldn’t be fulfilled. But I think his memory of it—and the photograph posted next to his bed—made his death easier two weeks later.

From my hospice friends, I’ve learned much about living and dying. In serving them, I’ve come to believe the baggage I’ll tote with me to my death will determine its quality. I’ve learned the importance of doing simple things—telling my family and friends I love them; expressing gratitude for even the smallest kindnesses shown to me; being accepting of the unskillful words and actions of others; and asking for forgiveness when I screw up.

For me, the “good death” as they called it in the Middle Ages, is one involving a minimalist approach. Fifteen hundred years ago people said their goodbyes, gave away their furniture, and peacefully left. That sounds about right to me, but, instead of furniture, I plan to focus on clearing my plate of all those things that take me further away from the core of being human.

Stan Goldberg is a professor emeritus of communicative disorders at San Francisco State University and the author of six books. His latest is Lessons for the Living: Stories of Forgiveness, Gratitude, and Courage at the End of Life.