Playwright Eve Ensler’s book The Apology, written in her father’s voice, tells the story of the terrible abuse she suffered growing up. She talks to Andrea Miller about why it’s healing to tell the true story of your trauma. 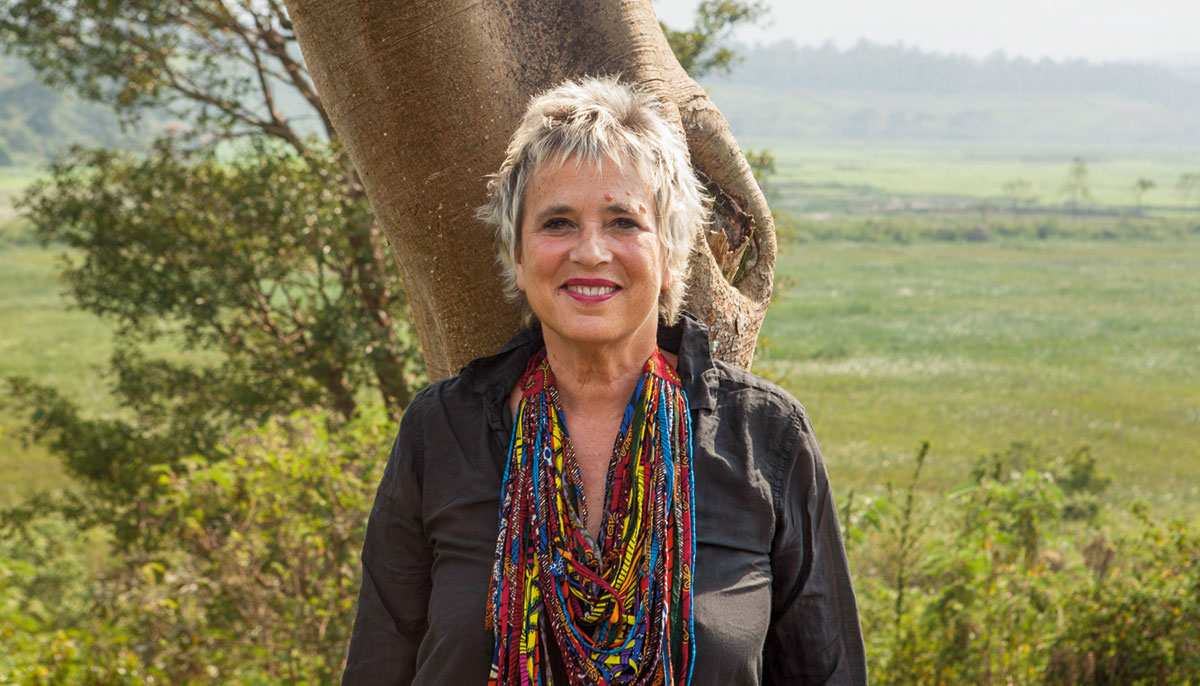 Andrea Miller: How did you personally discover the liberating power of telling the story of the abuse and trauma you suffered?

Eve Ensler: From an early age, I was always writing. I felt like if I could write in my journal, I would be okay. I could create this alternative persona and I could tell that persona things. It somehow lifted off the pressure I was feeling.

And I always loved the theater. People told stories out loud that were uncomfortable. They said things that weren’t supposed to be said. My childhood was spent living a lie. I was living in this upper-middle-class family with literally a white picket fence. Violence was going on inside, and everybody was pretending it wasn’t. That was driving me insane. So when I realized there might be a way to say the truth, that was a thrilling prospect.

When you write or tell what happened to you, you create wholeness by writing a narrative that makes sense of what happened.

Why is it healing for us to tell the story of the trauma and suffering we have experienced?

When you’re severely traumatized, you’re fractured. You’re separated from yourself, separated from your body. Trauma also plays mind games on your memory. What happened to you is so painful that you stop remembering it in order to survive. 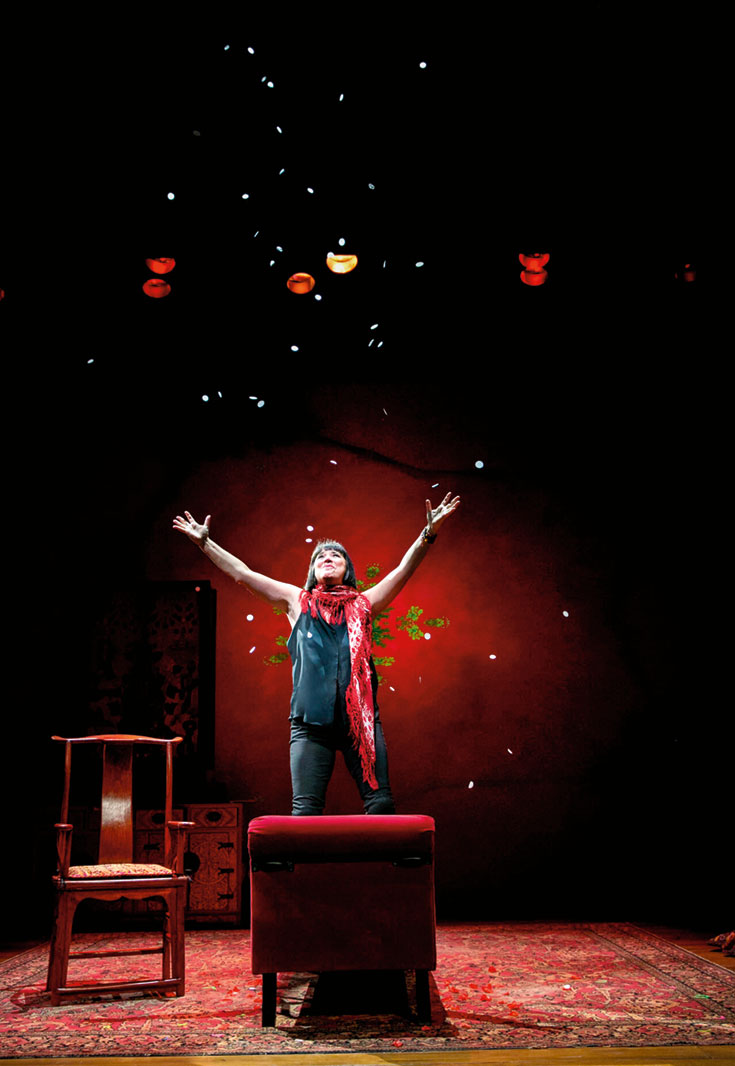 When you write or tell what happened to you, you create wholeness by writing a narrative that makes sense of what happened. It’s a sacred act to tell your story. Photo by Evgenia Eliseeva.

How does it help others when we share our experiences of suffering with them?

The stories that people don’t normally tell—that are taboo—are the stories people are most drawn to. The glossy stories, the cover-up stories—they keep people feeling bad about their real stories. So whenever you tell a real story, you free people to be in their authentic selves. The greatest we can hope for is that people break out of this mirage, which doesn’t address what’s happening to most people.

When you do that, it can be a bit terrifying. When I first did The Vagina Monologues, I just hoped I wouldn’t get shot. There was a feeling of breaking through some wall—anything could happen. But it was thrilling because I saw immediately how people were responding. They were lining up in droves after the show every night to tell me their own stories. Most of them had never told anybody those stories before. When you break the silence, there’s a great risk, but there’s also a huge gift. You suddenly realize how many people have been waiting to get free.

You’ve traveled the world, gathering stories from women who suffered gendered violence. What’s the best way to respond when someone tells us about trauma they suffered?

In my early days of hearing women’s stories, I did it badly. Our instinct is to make everything better, to make the pain go away. What I learned is that’s not my job.

People don’t want your opinions. They don’t want you to save them or to tell them what to do. They want you to listen deeply, be present deeply, and be an emotional presence with them. That means being able to tolerate what you’re hearing without having to do anything.

Your most recent book, The Apology, is about the abuse you suffered at the hands of your father, and it’s written from his point of view. Why did you take that approach?

I had been waiting my whole life for my father to apologize to me. He died without apologizing, but it didn’t mean I wasn’t still waiting for that apology. Then I was watching and listening when men were getting called out as part of the Me Too movement, and none of them, even in articles they were writing, were apologizing. All of them were just talking about feeling sorry for themselves and their careers that were ruined. Not one had taken into consideration how their victims felt. Not one was doing any self-interrogation or doing any work to address what had happened.

It suddenly occurred to me that I’d never heard a man publicly apologize for sexual or domestic abuse. It’s one of the basic columns of patriarchy to never apologize. So I thought to myself, well, why don’t I write the apology I need myself? I can give myself a vision of what that apology would feel like and look like—and maybe it will be a blueprint for men who might try it, or for other women who might want to write apologies to themselves from their own perpetrators.

I’m hoping it will lead toward the evolution of an apology process where men can look at themselves, look at the roots of what created them to be this kind of man, and account for what they’ve done. What has the impact been on their victim? How has it changed their victim’s life? I feel if we don’t begin that process, we’re going to be spinning our wheels for eternity.

How did writing a book in your father’s voice affect the writing process, and how has writing this book affected your life?

The writing was grueling. I don’t want to pretend it wasn’t. The thing I never wanted to do was feel my father’s pain. For so much of my life I had no bandwidth for saying my father went through pain and that things happened to him, which had made him this kind of person. I was angry, and to feel my pain as I was feeling my father’s pain was excruciating. But on the other side of that wound was freedom. Truth is true freedom.

The paradigm I was living in before writing The Apology was determined by my father—me proving I wasn’t stupid, me proving I wasn’t bad, me having to fight to be successful to show him he was wrong about who I was. That’s all over. I’m living in a whole new narrative now. Some days it’s bewildering because I lived in that other paradigm for so long, but most of the time it’s exciting and liberating.

According to The Apology, your father experienced trauma during his childhood. Do you know that those things happened or are you speculating?

Some of them I do. I knew little bits of stories and I elaborated. The book is an act of the imagination, a conjuring. But sometimes, oddly, the imagination can be more accurate than anything. We plug into something in this compassionate, empathetic way that gets us very close to things.

What would you say to people who think that humanizing an abuser by talking about what they suffered is letting them off the hook?

There’s never any justification, ever, for anybody doing abusive, horrible things to you. But explanation is really helpful in freeing one from the chains of bondage with your perpetrator. As you begin to understand what motivates people, you see the abuse had nothing to do with you. All of us have been raised in a world of horrifying patriarchy and toxic masculinity. Men have been made in the same story. Unless we deconstruct the whole story and all the people who have been poisoned by it, we’re not going to get free. So I want to be really clear that I do not think explanation is justification. It’s understanding, and that’s very different. My father does not get off the hook in my book.

Hearing or reading stories of abuse and trauma is emotionally difficult. How can we keep from feeling overwhelmed?

If you’re going to hear stories, you have to protect yourself. If you’re a compassionate person, people’s suffering will go into you. And we want it to go into us—we want to feel what other people feel. But we have to have practices afterward to release our anger—therapy, yoga, dancing, moving your body, writing.

It’s a sacred act to tell your story.

What can we do to make sure people feel empowered to tell their stories?

Pay attention to the people around you. Everybody has a story. I see people who’ve known someone for years, but they’ve never listened to their friend’s story. People need to share their stories, to get them out. Learn how to be an open person so others feel they can tell you their stories. Be receptive.

One of the things people can do—particularly men—is begin an apology process so that women feel safer to come out with their stories. With the Me Too movement, we now have to go to the next level, where men step up. Because if that doesn’t happen, there will be no change. It actually could be just 10 percent of men who begin. That will get the ball rolling.

What’s your advice to people who  feel silenced or disempowered to tell their story?

Write your story in a journal, so you begin to know it for yourself in a private way. Then, once you know it, find somebody you trust and share it with them. Inch your way out with it, taking careful steps to protect yourself. It’s a sacred act to tell your story.