Richard Gere reflects on how His Holiness the Dalai Lama has impacted him. 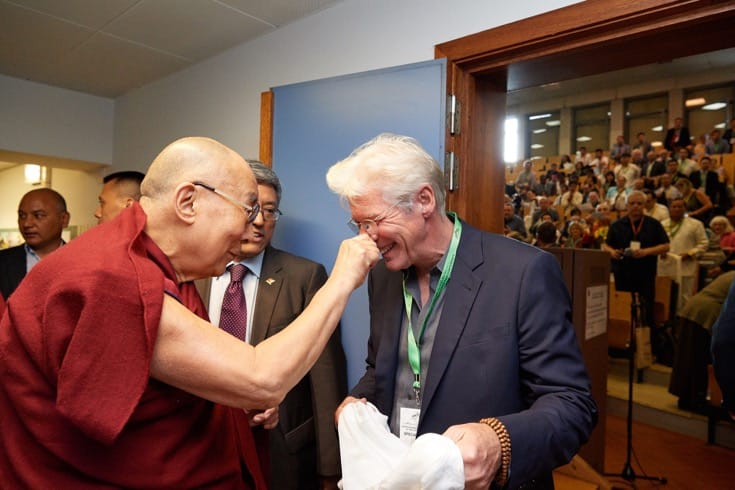 The Dalai Lama playfully squeezes Richard Gere’s nose at “Power and Care,” a conference hosted by the Mind and Life Institute in Brussels, in September of 2016. Photo by Olivier Adam.

I remember having an intimate conversation with His Holiness many years ago. At one point he touched the tip of his tongue and quietly said, “This tongue has never lied.”

What a simple and astonishing statement. It cut right through me. It would be quite unthinkable to believe such a clear and dignified declaration from anyone these days. Deception, self-interest, greed, violence, corruption, and alternate truths are all sadly deemed acceptable, and even expected. Even the President of the United States stands naked in his foolishness. Language has become hollow. Words themselves have lost their sacredness. Grace, kindness, and simple dignity are ridiculed as politically correct.

He is the radiant sun of the universal embrace. He is inclusion, service, and self-sacrifice. He is genuine love.

But there are a few giants such as the Dalai Lama remaining among us — giants who with heartbreaking humility speak and act with sensitivity and concern for all beings without bias.

The dark forces that would divide us, that would shrink our world into tribal self-interest and indifference, or outright cruelty and hatred at its worst, are manifesting in frightening ways all over the world today. The Dalai Lama and his influence are needed more than ever now.

His Holiness wakes us from our dreadful sleep. He is the radiant sun of the universal embrace. He is inclusion, service, and self-sacrifice. He is genuine love. He is interconnectedness. He reminds us who we really are. He makes us larger. He makes us care. He delights us with his wisdom, his joy, his laughter, and his optimism. He carries us. How impossible it is to be proud and pretentious around someone so utterly simple and kind.

We want to be better. We want to be good. We want to find solutions that work for everyone — that bring happiness and the causes of future happiness to ourselves and all beings without the merest speck of discrimination. Gazing at the Dalai Lama’s face, hearing his words, receiving his blessings, we want to love more deeply, forgive more completely, and serve others more selflessly. And we can.

Beings such as His Holiness the Dalai Lama rarely come to our world. But they do most certainly come when we need them the most.

In His Holiness’ loving presence, we know that all good things are attainable. We know that the darkness of this moment is not permanent. It is completely transformable — if we do the work, if we want it badly enough. We have this extraordinary opportunity now, right now.

Beings such as His Holiness the Dalai Lama rarely come to our world. But they do most certainly come when we need them the most. How foolish it would be for us not to embrace this amazing gift and not do the work to free ourselves and all our brother- and sister-beings from this craziness. It’s up to us.

I once half-jokingly asked His Holiness if I could stop with all my commitments. I was tired. He smiled and said, “You can stop when I stop.” I laughed. Because of course that meant never.

Richard Gere is an actor, activist, and chair of the International Campaign for Tibet.