Jarvis Jay Masters has spent three-plus decades on death row for a crime many think he did not commit. Rebecca Solnit celebrated his 56th birthday with Masters as he seeks freedom through meditation until the day his conviction is overturned. 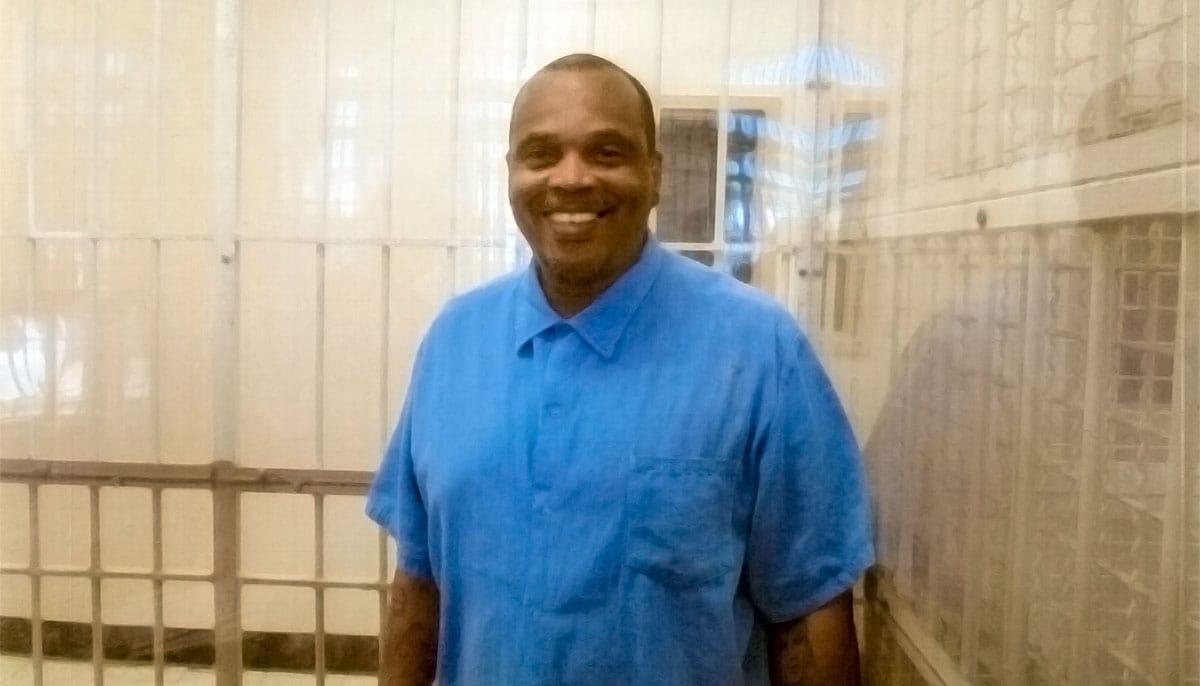 Bolted to the wall is a box painted a glistening red, and on it stenciled in white are the letters TRAUMA. Inside there must be equipment for physical traumas because this is not a place that’s well-equipped for addressing emotional traumas, though it is full of them.

There’s a big black lock on the trauma box, and I wonder if the guards wearing utility belts with handcuffs and guns have the key to unlock TRAUMA, or if it is with the guard at the entry booth, behind the thick plexiglass. How do you unlock trauma? Who holds the keys to freedom? One of the guards has an insulated lunchbox sitting on the TRAUMA box, from which he removes a doughnut; the other one has a small ziplock bag of what looks like Oreo cookies.

To the right of the TRAUMA box is a series of cages in which there are people visiting face-to-face but locked in those cages. To the left, people visit through thick windows, sometimes using a phone receiver to communicate with the person they’re facing. Two Latino men and a woman crowd around a window so that I can’t see who they’re talking to; a woman with her hair in tiny braids speaks to a big, handsome man on the other side of the glass, and another woman with long red hair props her tiny daughter on the shelf where a man is trying to connect with her from the other side. Sometimes the child responds; sometimes she looks away. I wave and smile, but she’s having none of it from me and not so much of it from the man who might be her father.

He’s managed to make, in some ways, a good life within the most horrific limits imaginable.

It’s visiting day at San Quentin State Prison: February 24, 2018. It’s also Jarvis Masters’s fifty-sixth birthday, and I’m waiting to see him. These are some things you might want to know about Jarvis Masters: Pema Chödrön drops by to see him when she’s in the Bay Area. He took the precepts with Chagdud Tulku Rinpoche in 1989. He has a serious meditation practice and a lively sense of humor. And he’s on death row in San Quentin for a crime he did not commit.

Jarvis has been waiting for more than three decades for a chance to have the shoddy evidence and corrupted trial that convicted him reviewed and his conviction overturned. During that time, he’s written a few books, converted to Buddhism, spent a lot of time meditating, and built a remarkably wide and thriving social life beyond the prison walls, much of it with fellow Buddhists.

I admire the ways he’s managed to make, in some ways, a good life within the most horrific limits imaginable. Though our earlier visits were in cages, today I have to talk to him through thick glass because he’s being punished for protesting his own situation and that of the men around him. He’s waited decades for a chance to challenge the verdict and introduce new evidence, during which time he’s lived with a death sentence hanging over him.

Here in California, we are not sure whether we want to have state-sanctioned murders or not, so we keep sentencing people to death but have held few executions since the death penalty was reinstated. There are now more than seven hundred people on death row, far more than in any other state. The last execution was in 2006, of a man sentenced in 1981.

It’s cruel and unusual punishment to keep someone waiting, not knowing if and when a state-inflicted death will happen. When Jarvis went on a hunger strike, he was thinking of all the condemned men there with him who die of natural causes or go mad in the bleak conditions under which they live. It’s a complicated situation—many prisoners fear that if the death penalty is overturned, they will be given life without parole and lose their access to the appeals process and to legal representation. They are, in a way, prisoners of bureaucracy. On election day in 2016, Californians voted to pass Proposition 66, a measure designed to speed up the death penalty. But there is a stalemate about what drugs can be legally used for executions. In a way, the prisoners are locked in a box labeled TRAUMA, and who holds the key remains to be seen. 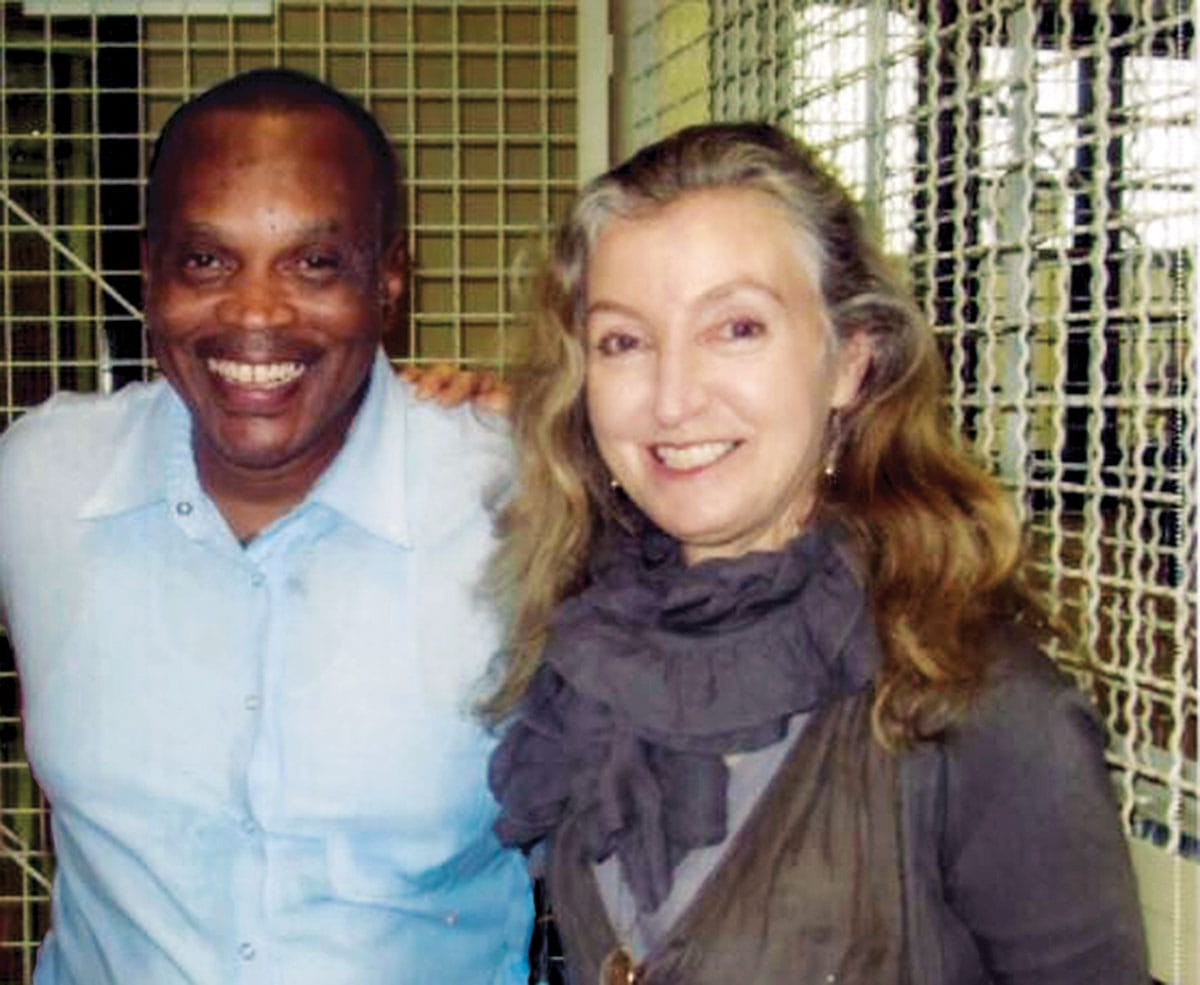 Jarvis and I talk about his case, and his hunger strike, and the legal situation, and the deep suffering he sees all around him. Then we talk about writing, and his books, and then my books, and then the trauma of those subjected to violence on the street, in the home, and in prison. Somehow two hours pass, and then the guards take him away as I hastily sing a few lines of “Happy Birthday.” And so he enters his fifty-sixth year of a life spent mostly in this prison.

Jarvis was a Black child in Southern California who lived through the worst of what poverty and the state foster care system and juvenile justice system had to offer. He was imprisoned as a child for running away from abusive homes, and then at eighteen he held a gun in a robbery organized by his uncle’s friend and at nineteen went to San Quentin.

There he might have served out his time, but he was accused of sharpening the weapon with which a prison guard was murdered in the summer of 1985, when he was twenty-three. There are layers of reasons to question the charges, including the apparent physical impossibility of his having transported a weapon from where he was locked up to where the murderer stabbed the guard. The trial was a farce, with shoddy evidence, missing evidence, witnesses who were bribed, and others who changed their story. Someone else has confessed to sharpening the weapon. The murderer and the prisoner who ordered the murder did not receive the death penalty. The murderer has testified that Jarvis is innocent.

Pema Chödrön says, “I believe in Jarvis Masters’s innocence. This is not simply because of my love for him, but my certainty is based on having heard much of the evidence.”

There is a community of Buddhists who hope to build a bigger movement to free him. They’re drawing attention to his case by raising his profile with letters to California’s governor, attorney general, and a key state senator, and pressing for a fair hearing soon. On January 26, there was a worldwide day of meditation with and for Jarvis. You can learn more at freejarvis.org.

Writer, historian, and activist Rebecca Solnit is the author of books on feminism, Western and Indigenous history, social change and insurrection, wandering and walking, hope and disaster.