Won Buddhism was founded by the Korean teacher Sotaesan who believed that anyone could attain enlightenment, regardless of background or education. Doyeon Park looks at Sotaesan’s life and how he resolved to make the dharma more accessible for everyone. 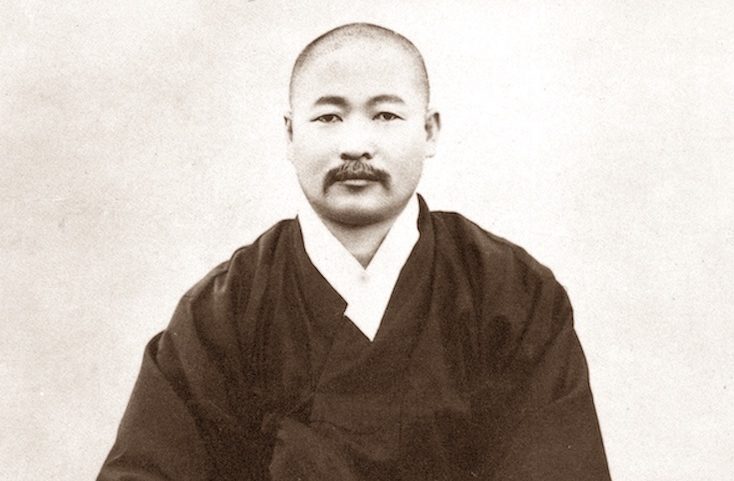 Sotaesan in 1927. Courtesy of Won Buddhism.

Sotaesan was a famous Buddhist master who was born in a rural area of South Korea in 1891. At age 26, he established Won Buddhism, a new Buddhist tradition that now has more than 500 temples in Korea and 25 in North America. Rev. Doyeon Park, minister of the Manhattan Won Buddhist temple and Buddhist chaplain at New York University, delves into the life of Won Buddhism’s founding master.

Sotaesan, born Park Chungbin, began his quest to understand the fundamental principles of the universe and human life at an early age. Looking up at the sky, he wondered, “How is the sky so high and wide? How can clouds and storms appear from such a clear sky?” Sotaesan questioned anything he encountered in his life at that time, including his own existence. Even his family members—parents, brothers, and sisters—all served as models for spiritual questions. The more he became engrossed in questions, the more Sotaesan became committed to finding answers.

At the age of eleven, Sotaesan heard of a traditional folk legend in Korea at the time of an all-knowing mountain spirit. He thought that if he could meet this spirit, he would find the answers to all of his questions. It is said that Sotaesan often hiked four kilometers from his home into the mountains to offer prayers to the mountain spirit, but, despite his untiring dedication, it never appeared.

When he was sixteen, Sotaesan was inspired by a story about a man who had his wishes fulfilled upon meeting an enlightened teacher. He gave up his quest for the mountain spirit and began to look for a spiritual teacher. Whenever he saw a stranger or a beggar, he tested them. Sometimes he even invited them to his house to see if they might be a teacher in disguise.

Sotaesan’s search for a spiritual guide came to an end when his father, a great supporter of his spiritual journey, passed away in 1910. This was a turning point in his life. After becoming the head of his household, it was expected that Sotaesan would provide for his family.

When Sotaesan gave up on finding a teacher, his inward search reputedly began with one thought: “What shall I do?” He dwelled on that question for years, from morning till night. Then, one day, that singular, all-consuming worry vanished and Soteasan entered a state of deep samadhi (meditative consciousness). During this ascetic practice, it is said that he sat in great calmness as his health began to deteriorate and strange blotches appeared all over his body. His neighbors and family grew concerned, and regarded him as a living corpse.

On April 28, 1916, as dawn broke the darkness of night, Sotaesan’s mind and heart opened, and all of his previous questions were resolved with perfect clarity. At the age of 26, it is said that Sotaesan awakened to the truth.

Full of energy, Sotaesan asked his neighbors for the primary scriptures of Confucianism, Buddhism, Taoism, and Christianity so that he could study them. After extensive reading, he said, “That which I have known has already been known by the ancient sages.” He continued, “Shakyamuni Buddha is truly the sage of sages. Though I’m awakened without any teacher’s guidance, I realize that many things coincide with the words of the Buddha. I will take the buddhadharma as the central tenet of my teaching.”

However, after reflecting on Buddhism and the societal needs of the time, Sotaesan felt that the buddhadharma needed to be restructured to be accessible and practical for everyone.

Many people began to gather for Sotaesan’s teachings, soon considering him to be a living buddha. According to accounts, the first thing he taught his disciples was “diligence and thrift” to help poor villagers establish a savings association. When sufficient funds had accumulated, he and nine core disciples began constructing a dam on riverside tidal land in Kilyongri, turning it into a rice field. They repurposed the muddy embankment into twenty-five acres of fertilized land, which became the economic basis of the Won Buddhist Order. 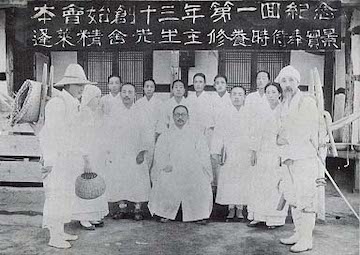 Sotaesan with disciples in 1928. Courtesy of Won Buddhism.

Sotaesan’s intention was to teach his disciples how to build up the economic foundation of the local community. He wanted them to understand that mind and body are not separate.

Next, Sotaesan guided his nine disciples to offer a prayer for the salvation of all beings. On August 21, 1919, when the nine disciples pressed their bare thumbs on a white sheet of paper, on which was written, “Sacrifice with no regret,” it is said that nine fingerprints appeared in blood. This event is known as the Miracle of the Blood Seal on the White Paper and is regarded as the spiritual foundation of Won Buddhism.

As the community grew, Sotaesan decided in 1924 to establish the general headquarters in Iksan, South Korea, which is easily accessible from all directions within the country and spacious enough to accommodate the needs of the community. In the same year, Sotaesan and his disciples had the first general assembly for the founding of the Buddhadharma Research Society, which was the name of the community until the Second Head Dharma Master Chongsan renamed it in 1947 as Won Buddhism.

This community was developed based on Sotaesan’s vision to make the buddhadharma practical, useful, and beneficial to all sentient beings so that all practitioners could attain awakening in their daily lives.

On June 1, 1943, after 28 years of delivering the dharma, Sotaesan passed away in Iksan. A year before his passing, Sotaesan finished writing the Principal Book of Won Buddhism. The following is his dharma transmission verse:

Rev. Doyeon Park is a Kyomunim, literally meaning one who devotes oneself to teach Buddha dharma in the Won Buddhist tradition. She has served as a minister of the Manhattan Won Buddhist temple and a representative of Won Buddhism at the United Nations since 2008. She is the Buddhist Religious Life Adviser at Columbia University and the Buddhist chaplain at New York University.