Robert Thurman sees the Dalai Lama as a reincarnation of the Buddha of universal compassion. Amidst the chaos of today’s world, he says, the “simple monk” remains undaunted, and even cheerful. 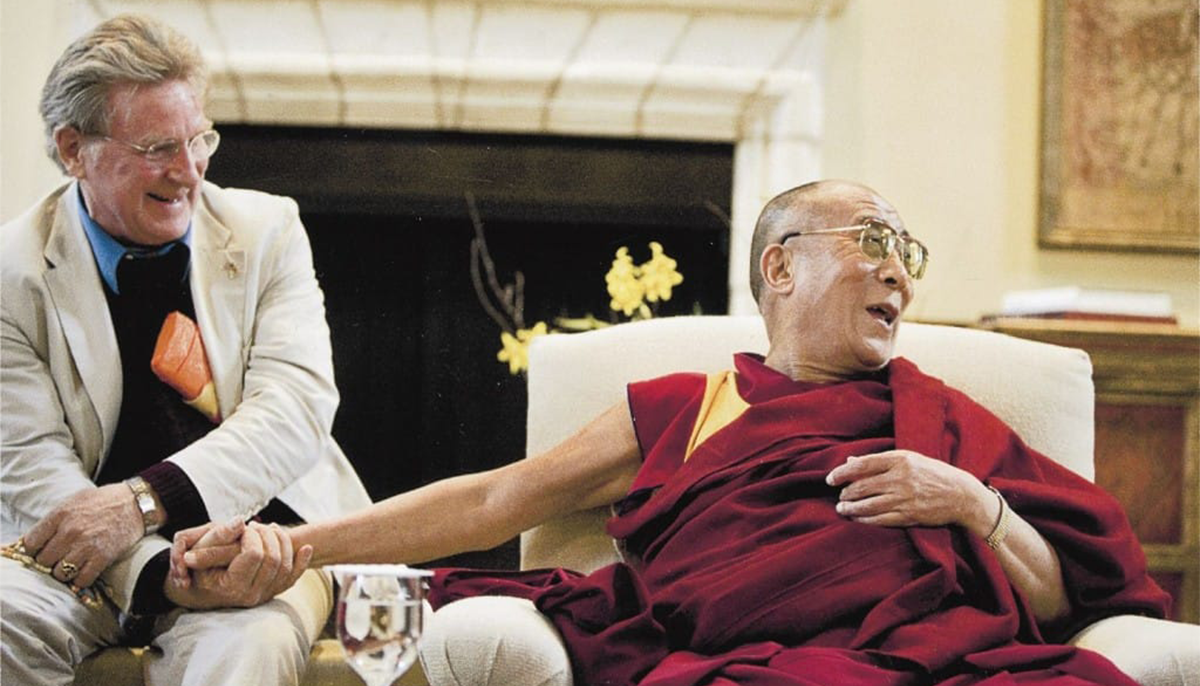 When I have attended His Holiness the Dalai Lama giving Buddhist teachings to large assemblies, I have had an odd sensation lately: it feels as if I have entered a time warp, and am actually witnessing Shakyamuni Buddha himself in all his glory as a teacher. As the Noble Vimalakirti Sutra puts it, “Dominating all the multitudes, just as Sumeru, the king of mountains, looms high over the oceans, the Lord Buddha shone, radiated and glittered as he sat upon his magnificent lion-throne.”

Over many years, I had attended His Holiness’ teachings and found them informative and inspiring, but I had always felt that it was the Dalai Lama I knew sitting there before me. Buddha was often mentioned as a remote founding figure, far back in ancient history. Sure, this new sense I have is just subjective, my going “dotty,” like a typical devotee. Maybe so; but it also gives me a clue about what the Dalai Lama has come to mean for the world.

I think the Dalai Lama has grown so close to Shakyamuni Buddha that their manifestations have become indistinguishable; the Dalai Lama has become a living proof of the Mahayana vision of Buddha’s inexhaustible compassionate presence. I think people sense that fact, each one according to their level of insight, as constrained by preconceptions, experience and understanding.

This does not mean that the Dalai Lama is a “God-king” or a “living God,” as is sometimes written in the press. For Buddha is not “God,” who, if He did exist as conceived by Western monotheists, would be absolutely unimaginable, forever trans-human. Buddha, though also inconceivable ultimately, on the relative level is a being who was thoroughly human at one time, like you or me, and then through many lives evolved into something more than human and more than any God.

He is a wise and compassionate, omnipresent but not omnipotent, universal awareness and powerful energy called “Realized One” (Tathagata), “Blissful One” (Sugata), “Teacher of Humans and Gods” (Devamanushyanam Shasta) and many other names. He/she is everywhere embodied/disembodied as reality, manifesting as seeming individuals in sensitive response to the needs of beings. Any particular manifestation of Buddha is thus a kind of living doorway to each individual’s own happiness, a mirror, to that individual, of the reality that must be understood for that individual to realize their own wisdom, freedom from suffering, immortality and supreme happiness.

It is natural that this might all seem merely hypothetical and unrealistic, the high-flown, challengingly optimistic philosophy (or Buddhology) of the Mahayana Buddhist sutras. It becomes concrete only in the live encounter with such a Buddha-manifestation. It takes a living personification of the Buddha-qualities to make our own freedom and enlightenment seem really possible, a live exemplar of the Buddha-happiness to make our own mouths water for the taste of our own real happiness. This is the real meaning of the Dalai Lama’s presence. It is felt by all who meet him, through whatever medium, consciously or unconsciously.

It is not merely that the Dalai Lama represents “Buddhism,” thought to be a distinct “religious system.” He is much more than a nominal leader of an organization. He does not seek to convert anyone to “Buddhism.” “Buddhism” is not a world organization, competing with other organized world religions, seeking strength in numbers. It is an age-old movement seeking to educate the heart and mind of any being for freedom and happiness, no matter what their ideology. It is a teaching of the reality of selflessness and relationality. The Dalai Lama is a simple monk, an adept mind scientist, a thorough scholar, a spiritual teacher, a diplomat, a Nobel Peace Prize Laureate, an apostle of nonviolence, an advocate of intelligence and universal responsibility, and the living exemplar of what he calls “our common human religion of kindness.”

We live in an era of extreme contrasts: Technology informs us more than ever and yet makes us feel weaker and more frightened than ever. The art of caring for the sick seems more sophisticated than ever, and yet the food-chain is poisoned, the environment polluted and good advice on how to live well is harder than ever to find. Pluralism on all levels seems more essential than ever, yet the cruelty of fanatics rages more violently than ever. Knowledge and technology have infinite potential to transform our world, potentially for the better, yet all around us devastation proceeds inexorably.

In this climate of manifold desperations, both quiet and shrill, the Dalai Lama seems to emerge from another civilization, to descend from a higher altitude, as if from another dimension, a living example of calm in emergency, patience in injury, cheerful intelligence in confusion, and dauntless optimism in the face of apparent doom. Inspired by Jesus, Gandhiji and Martin Luther King, Jr., he carries on that tradition under the extreme duress of the half-century-long agony of Tibet.

What does the Dalai Lama mean? He is a living prince of peace, a teacher of intelligence, an inspirer of goodness of heart, a reincarnation of the Buddha of universal compassion.

Especially since the emergency call of 9/11, the world seems headed into a tailspin. Instead of a post-cold-war century free of war, endless war is declared from several sides. Instead of increasing prosperity and joyful, optimistic sharing, the gulf between rich and poor grows cataclysmic, and the world economy seems heading for collapse. Instead of a scientifically sound era of healthy living, new plagues rear their terrifying heads. Hopelessness and fear send everyone rushing for an exit, diving into an isolated personal shelter. The West’s Four Horsemen of the Apocalypse are riding wild upon the range.

In the midst of this, the Dalai Lama remains undaunted, even cheerful. He doesn’t give up the responsibility for his own people, a nation of six million very close to succumbing to systematic genocide with no one in official power to protect them. He doesn’t revile the harmful leaders as “evil”; he calls for dialogue and reconciliation, still, after more than fifty years of violence and oppression. He insists on the message that intelligence and kindness together can solve any situation. He sees that all is possible, even the good, the true and the beautiful, and people therefore feel a huge weight lifted from them when they meet him. Though he is a simple monk, what the Zen people call a “true man of no rank,” without any powerful organization, recognized nation, institutionalized religion or rich industry or foundation, he still stands out as a natural leader of the plain people, a living symbol of nonviolence. He looms head and shoulders over the crowd of political leaders who tend to parade themselves as masters of violence.

What does the Dalai Lama mean? He is a living prince of peace, a teacher of intelligence, an inspirer of goodness of heart, a reincarnation of the Buddha of universal compassion. He comes to join us in our world today, offering us hope and help in our stressed-out lives and calling upon us to take up our own wild joy of universal responsibility.