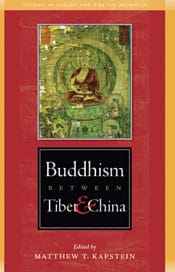 On the Cultural Revolution in Tibet: The Nyemo Incident of 1969
By Melvyn C. Goldstein, Ben Jiao, and Tanzen Lhundrup
University of California Press, 2009
264 pages; $24.95 (hardcover)

In March 2008, ethnic Tibetan unrest and Chinese state suppression rocked the Tibetan plateau. As graphic images of conflict and distress circulated, the world was sharply reminded of the troubled relations among Tibetans, Han Chinese, and the Chinese government since the People’s Liberation Army (PLA) advance in 1950. Two key elements in Tibetan protests have been the prominent participation of Buddhist monks and nuns, and calls for the return of the Dalai Lama—or at least the freedom to express devotion to him.

Under the shadow of the current situation, it’s all too easy to oversimplify Tibetan-Chinese relations. The timely release of two new books calls our attention to this pitfall. Buddhism Between Tibet and China offers historical perspectives spanning more than a thousand years, while On the Cultural Revolution in Tibet: The Nyemo Incident of 1969 investigates a brief but pivotal period fraught with tension and conflict. Together, these books provide valuable resources for understanding contemporary Tibetan-Chinese relations.

In his introduction to Buddhism Between Tibet and China, editor Matthew T. Kapstein highlights the “sheer tenacity of the Tibet-China relationship” in which Buddhism often served as a bridge. Even before our modern modes of transnational communication and travel, explains Kapstein, the Tibetan Buddhist clergy’s “unique and heady blend of rational and charismatic authority” enjoyed broad appeal across Central and East Asia, linking diverse ethnic groups such as the Han Chinese, Mongol, Naxi, and Manchu. However, Chinese Buddhist practices never reached similar levels of popularity among Tibetans. The essays in this collection focus on the presence of Tibetan Buddhism in border areas and deep in the heart of China.

Sometimes Tibetan Buddhism mediated successfully between China and Tibet, other times not. In his contribution, Kapstein writes about a Buddhist temple commemorating an early ninth-century treaty between Tibet, China, and other regional powers in the wake of fractious territorial wars. Here, Tibetans were able to employ Buddhism in bilateral diplomacy and express their peaceful coexistence with China. Rob Linrothe shows how a similar attempt at diplomacy was less successful on the east coast of China in the late thirteenth century. Outside the Chan monastery Lingyinsi, Chinese and Tibetan Buddhist deities were sculpted side by side in visual harmony. However, according to Linrothe, the Chinese criticized the Tibetan-style sculptures and spread fears that Tibetan Buddhism would supersede Confucianism, Daoism, and Chinese Buddhism.

In border areas between China and Tibet, the expression of Tibetan Buddhism was often shaped by powerful patrons. Karl Debreczeny discusses the ethnic Naxi rulers of Lijiang (in present-day southwest China), who sponsored a temple that included Chinese Buddhist, Daoist, and Tibetan Buddhist figures. This “seamless incorporation” of various religious and artistic traditions reflected the rulers’ multi-ethnic interests and alliances. As for Chinese imperial support of frontier temples, Elliot Sperling demonstrates that a range of motivations were at work. In one case, the Ming dynasty court wished to receive the esoteric power and authority of Tibetan Buddhism. In other cases, there was a more “mundane concern to secure the frontier” through strategic religious connections.

Ordinary Han Chinese have long taken an interest in Tibetan Buddhism, as other essays make clear. Paul Nietupski surmises that the pragmatic worldview of Han Chinese predisposed them to the “this-worldly power” of Tibetan rituals. Ethnic Tibetan lamas were given the title “Gyanakpa” (meaning “Chinese”) because of their ability to teach Buddhism to Chinese and other non-Tibetans. By the early 1930s, as Carmen Meinert indicates, increased religious freedom and the presence of charismatic Tibetan lamas in ethnic Han areas attracted hundreds of Chinese to Tibetan Buddhism. The travels of the Karma Kagyu tulku Gangkar Rinpoche, especially his three-year teaching post in Beijing from 1953 to 1955, spawned an entire generation of Chinese disciples.

Chinese students became increasingly engaged in Tibetan Buddhism in the twentieth century. Gray Tuttle draws our attention to ethnic Chinese who translated and compiled Tibetan Buddhist materials into Chinese, demonstrating the great extent to which Chinese laypeople understood and practiced Tibetan Buddhism. Zhihua Yao shows how Chinese Buddhists were dissatisfied with their own religious heritage, and viewed Tibetan Buddhism as more authentic and complete. This resulted in translations of missing Yogacara texts from the Tibetan Tripitaka into Chinese, and informed internal critiques of Chinese Buddhist schools and doctrines. The ethnic Han lama Nenghai, Ester Bianchi writes, harmonized Chinese and Tibetan elements in his teachings. For example, throughout his works he replaced the Tibetan expression “mother sentient beings” with “mother and father sentient beings” in deference to Chinese filial values.

The final essays in the volume expose the complications and ambiguities that high-level political visits entailed. When the Thirteenth Dalai Lama visited Beijing in the fall of 1908, the dilemma of meeting protocol arose. The Dalai Lama was considered an emanation of Avalokiteshvara, the Qing emperor an emanation of Manjushri. Who should bow to whom? As Fabienne Jagou discusses in her essay, what transpired could be interpreted favorably in symbolic terms on both sides. When a visit to Taiwan was scheduled for the Fourteenth Dalai Lama in 1997, the Tibet issue carried high stakes for the future political status of Taiwan. Abraham Zablocki shows how this visit was “hotly debated” and delicately orchestrated to emphasize its religious, rather than political, significance.

Although this book is not meant to be comprehensive, collectively the contributors do an admirable job of conveying the general sweep of history. It may be tough going at times for nonspecialists, but careful and patient reading will be rewarded by nuanced insights, rigorous attention to detail, and a refreshing absence of politicized rhetoric. While some essays provide maps, a master map marking major sites from all the articles would have been a nice way to underscore the geographical aspects of Tibetan-Chinese relations.

On the Cultural Revolution in Tibet: The Nyemo Incident of 1969 presents a heart-pounding narrative interspersed with the cool, distant voice of analysis. From the first page, the reader is graphically immersed in the chaotic world of the Cultural Revolution. Authors Melvyn Goldstein, Ben Jiao, and Tanzen Lhundrup detail the chain of events around a young nun named Trinley Chödrön, who was said to be possessed by a powerful goddess and protector of Buddhism, Ani Gongmey Gyemo. In June 1969, she led hundreds of villagers in a series of violent actions in Nyemo County southwest of Lhasa. The Nyemo incident has become romanticized as a milestone in Tibetan national resistance against China, and, as the authors point out, the nun Trinley Chödrön has been compared to a heroic, “Joan of Arc-like woman” who “threatened China’s control over Tibet.”

The authors challenge this interpretation, arguing that it was not a matter of Tibetans versus Chinese but rather a bitter dispute between two revolutionary factions, Gyenlo and Nyamdre. These two factions arose during the Cultural Revolution, with differing views about how to implement Chairman Mao’s directives. The grievances of Gyenlo were expressed in ideological terms: Gyenlo accused Nyamdre of stalling revolutionary progress by protecting local government officials and cadres from being criticized and ousted. They were also expressed in terms of persecution, after the People’s Liberation Army attacked and killed Gyenlo activists at the Jokhang Temple in Lhasa in June 1968. As the authors take pains to demonstrate, Chinese and Tibetan members were active in both factions, and the victims of the violent uprising were both Chinese and Tibetan. Tibetan independence from the Chinese state was not a significant goal, according to their interviews.

The book also challenges the assumption that this conflict was primarily driven by the desire to practice religion. According to the authors, the Nyemo villagers who joined Gyenlo were driven by anger about onerous grain taxes and fear of agricultural collectivization. Later, as the nun’s fame as a medium grew, Gyenlo devised a plan to exploit her for their own ends. They hoped that she could exhort the villagers to act against Nyamdre under the goddess’ protection, calling them Gyenlo’s Army of the Gods. This strategy succeeded until the PLA retaliated with violence and captured the nun.

Throughout their study, the authors bring gripping evidence and astute analysis to bear on this little-documented period of Tibetan history. However, some caveats emerge upon reading this carefully crafted account. First, as the authors acknowledge, the reliability of oral history interviews is flawed given faulty or selective memories, as well as the deliberately slanted narration of events. This is even more the case in the Tibet Autonomous Region today, where the Nyemo incident remains controversial and interviewees may feel inhibited from expressing themselves freely. Given these conditions, there is much room for interpretation.

Second, although movements may begin under very localized conditions, they can take on agendas that have little to do with the original impetus or plans of the elite leadership. In addition to economic hardship, villagers were unhappy about new prohibitions on religious practice with the onset of the Cultural Revolution. Once Trinley Chödrön began practicing as a medium, she tapped into the community’s latent desire for religious practice, as her ascendant popularity and loyal following made clear. Recognizing this, Gyenlo leaders promised villagers that once they were in control, they would allow the open practice of Buddhism. Even if religious dimensions did not develop until some months after Gyenlo’s initial plans against Nyamdre officials in Nyemo County, their subsequent vital role warrants deeper analysis.

Readers looking for thoughtful and well-informed perspectives on “the Tibet question” will not be disappointed. These volumes resist easy answers and black-and-white explanations, preferring to set forth new research and complex viewpoints. The authors take care to draw extensively on both Tibetan and Chinese language sources and informants. Perhaps more important, many of the contributors have seriously engaged with ethnic Tibetan and Chinese scholars of Tibetan studies in the People’s Republic of China and beyond—scholars who have long been overlooked in Western explorations of Tibet. We can only hope that continuing social and intellectual exchange among these groups will further a spirit of cooperation and mutual understanding.