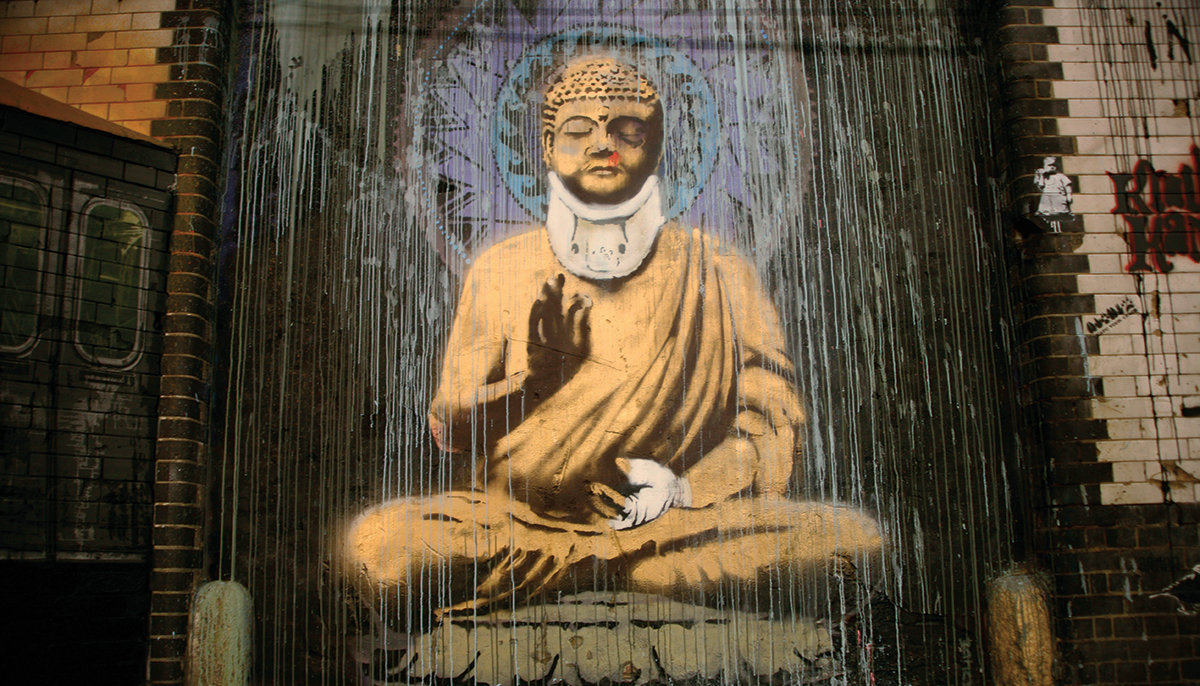 David McMahan concluded his influential 2008 book, The Making of Buddhist Modernism, with a question: “Is there something like a postmodern Buddhism emerging from the strains of the Buddhist modernism I have been discussing?” While the categories of modernism and postmodernism remain disputed, Ann Gleig takes up the baton in her pivotal new work, American Dharma: Buddhism Beyond Modernity, guiding readers beyond Buddhist modernism into hitherto uncharted territory.

Drawing from her ethnographic work on sanghas across the continent and the work of scholars including McMahan, Donald Lopez Jr., and Joseph Cheah, Gleig shows us an American Buddhism filled with contradictions and a growing awareness of its own internal problems, as well as a willingness to grapple with those complexities as traditions move into an unknown future.

Our journey begins at a familiar landmark: the booming modern mindfulness movement. While mindfulness has blossomed into what scholar Jeff Wilson calls “the single most impactful aspect of Buddhism in America,” that growth has brought with it a tide of concerns about the separation of mindfulness from other aspects of Buddhism, most notably ethics and wisdom (following the threefold path of sila, samadhi, and pañña). Other concerns arise as well, as Gleig notes:

Critics draw on distinctions between right and wrong mindfulness as decreed by the Pali canon and differentiate between sincere individual intentions and the institutionalization of self-disciplines as informed by Michel Foucault. These unusual bedfellows of religious conservatives and critical theorists, premodern and poststructuralist perspectives, are united by a suspicion of the distinctively modern discourses that have overtaken Buddhism.

For the nonspecialist reader, Gleig carefully explains the conditions of “postmodernity” as a reshaping, rather than a replacement of, “modernity.” In part, the shift from modern to postmodern signifies a movement arising around the 1970s, “marked by increasing globalization, the rapid development of new communication and information technologies, the restructuring of capitalism, and the rise of consumer culture.” Likewise, in this period, North Americans have lost some faith in the grand narratives of modernity, namely those of science, reason, and social progress.

Drawing from sociologist Paul Heelas, Gleig notes that postmodern religions can be characterized by their “intermingling of the religious and secular, a consumer approach in which religions are viewed as products and engagement is seen as a matter of personal choice, a willingness to combine high and low culture and draw from disparate frameworks of meaning, and an orientation toward pragmatism and relativity.” Heady as that may sound, readers need not worry about getting lost in the weeds of theory or jargon. The heart of the book consists of the voices of the dozens of Buddhists Gleig interviewed across North America, all painting a picture of a lived religion struggling to be relevant to the lives of modern (or postmodern) Americans.

Gleig catalogs the ways Buddhism has flourished in the last generation or so, including major Buddhist magazines, the blogosphere, podcasts, and increasing scholar–practitioner interactions. She also offers a brief history of major historical periods of Buddhism (canonical, traditional, and modern) en route to what we see today. Understandably, much had to be left out. As such, the book cannot serve as a general survey of North American Buddhism. However, Gleig’s research offers carefully crafted excursions into the lives, words, and sanghas of many notable American Buddhists with specific attention to Zen and Theravada “convert” communities.

American Dharma: Buddhism Beyond Modernity is a veritable who’s who of Buddhist scholars and practitioners, skillfully woven into conversation with each other on each of the covered topics. Gleig moves effortlessly from scholarly findings to practitioners’ accounts, ensuring that the work never feels clinical or distant. In the section on mindfulness, she relies on the authoritative scholarly works of Eric Braun and Brook Schedneck for historical perspective, then lets the voices of advocates and critics speak for themselves.

The tone of Gleig’s work is refreshingly even-handed, neither triumphalist nor dogmatically critical. Throughout, we are left with very little conclusion as to where things will go from here. And this is by design, as these debates and discussions are ongoing. In each case, however, the depth and complexity of contemporary American Buddhism are revealed. A recurring motif is that of struggle: the struggle of early American Buddhists with the conditions of modernity, the struggle to craft and then contain mindfulness, the struggle between confronting abuse and loyalty to teachers, the struggle of white Buddhists to wake up to the structures of racism operating in their communities, and so on.

At the heart of this struggle are the effects of the shift to postmodernism, which, as Gleig makes clear, presents both opportunities and dangers. For instance, while the potential for Buddhism’s most potent features to be coopted by prevailing individualistic and capitalist values is a clear danger, other changes are more positive.

One such area of opportunity is seen in how postmodern and postcolonial approaches challenge the patriarchy and racism of Buddhist communities. Zen teacher Myoan Grace Schireson offers a multidimensional analysis of sex scandals in Zen communities, breaking down personal, interpersonal, and what she calls transpersonal elements involved. Careful to lay final responsibility on the teacher, she does not shy away from discussing ways in which communities fail to protect vulnerable populations and how some women seek power and status through their relationships with teachers. Schireson’s background as a psychotherapist shows through in her ability to parse out the various dimensions of the scandals rocking Zen Buddhism, and Gleig makes it clear that this is an important way in which Western thought is successfully merging with Buddhism in the development of an “American Dharma.” 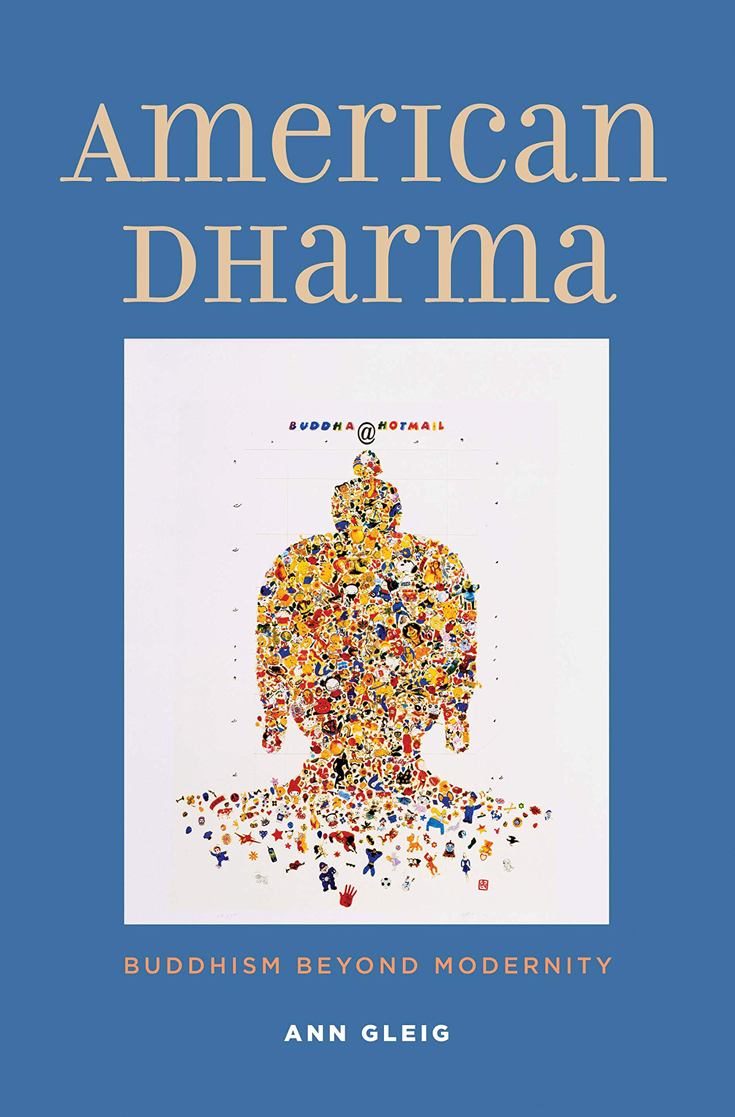 A second area of opportunity is in dealing with the dynamics of race and racism. Gleig recounts a poignant story of Travis Spencer, an African American who visited the Insight Meditation Community of Washington (IMCW) in 2010. The IMCW had flourished under the leadership of Tara Brach, but on this evening, despite the room being crowded with white faces, no one sat next to Spencer. As he put it, he was visited by “The Ghost of Racist Past” in his thoughts during meditation. He wrote about that night afterward and reached out to Brach, an “action that initiated a longstanding commitment to IMCW, and a personal friendship with Brach.” What follows is a sweeping history of the inclusion and diversity work that would follow at IMCW—work that was a struggle, particularly for white sangha members who were unprepared to see the racist reality around them as it was.

Nonetheless, in IMCW’s work and across the country in California, at Spirit Rock with Larry Yang and at the East Bay Meditation Center with Mushim Patricia Ikeda, there is a clear sense of progress through the struggles; barriers are being confronted and are coming down. As Gleig puts it, advocates of this work see Buddhism as “a potent remedy for collective American suffering” and see the work they are doing as a remedy for limitations in modern Buddhism.

Gleig further elucidates the contours of the shifting Buddhist landscape as it moves away from the hippie, free-love experimentation of the Boomer generation toward a series of new challenges around diversity, power, transparency, and the growing difficulty of making a living as a Buddhist teacher. Postmodern American Buddhists are cautious about allowing Buddhism to be separated from the world around them as an individualistic practice, insulated from the economic and ecological vicissitudes of the current age. They also know the progress occurring in some sanghas is not matched everywhere, that many people of color continue to feel alienated and that abuses of power still find deeply entrenched support.

This is a monumental contribution to the growing literature and scholarly awareness of American Buddhism. Like McMahan’s work, this book is imminently readable and filled with details that will pique the curiosity of, and hopefully inform, Buddhists of America and beyond.

Justin Whitaker is the author of the blog American Buddhist Perspectives, where he explores Buddhism as it relates to ethics, ecology, philosophy, and politics; he is also the North America correspondent for Buddhistdoor Global. A Buddhist scholar, he is currently a visiting instructor at the Centre of Buddhist Studies of Hong Kong University, where he teaches courses on Buddhism in contemporary society and Buddhist ethics.