In the face of racism and oppression, they’ve made their practice communities their refuge. Jean-Paul Contreras deGuzman on the hidden history of Pure Land Buddhists in America. 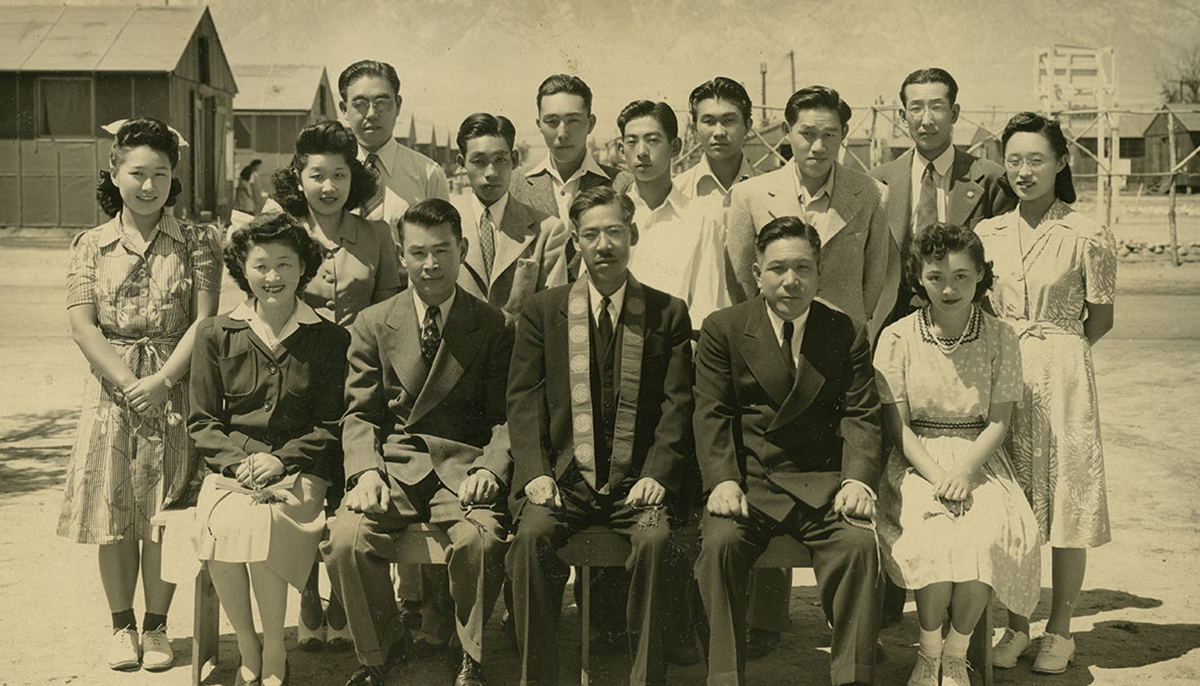 Japanese Americans in an internment camp in California in 1943. The Shin priest in the front center is Shinjo Nagatomi, the camp’s lead Buddhist minister. “The Y.B.A. cabinet for 1943” (ddr-manz-4-47). Manzanar National Historic Site, Shinjo Nagatomi Collection

They were responding to an impassioned plea by a lay collective of devout young followers of Jodo Shinshu (Shin) Buddhism, the largest branch of Pure Land Buddhism in Japan and the U.S. These young Buddhists had asked the Jodo Shinshu Hongwanji-ha organization in Japan to dispatch priests to America to minister to their spiritual needs.

“For those of us living in the United States, there is no possibility of basking in the Compassionate life of the Buddha,” they wrote. “Not only are we unable to hear about the Buddhadharma in general, we are cut off from enlightenment through the Teaching of Jodo Shinshu…. How we lament at such a state of affairs.”

Their letter is striking not only for the intensity of devotion it reveals, but also for what it says about the fraught place of Japanese Buddhists in America. “In the eight directions are non-Buddhist forces surrounding the Japanese Buddhists, and we cannot be at ease,” the collective wrote. “It is as if we were sitting on the point of a pin; no matter how we move, we will be pricked. Our burning desire to hear the Teachings is about to explode from every pore in our body.”

Religion was central to these Japanese (or nikkei) immigrants as they navigated a cruel landscape of exclusionary citizenship, property, immigration, and even marriage laws. The religions that provided succor to them were diverse: Catholics and Protestants, Shinto adherents, and Buddhists, ranging from Zen to Nichiren. The largest number of Buddhists, however, were Pure Land followers from the schools Jodo Shinshu and Jodo Shu.

The trajectory of Jodo Shinshu and Jodo Shu communities somewhat mirrored each other. Pure Land Buddhists established the Jodo Shu Mission of Hawai’i and the Hompa Hongwanji Mission of Hawai’i, which oversaw temples across the archipelago.

After Sonoda and Nishijima’s initial visit, Shin Buddhists rapidly began forming temples on the continent, often called churches to obviate scrutiny by a Christian-centric public. These spaces provided balm for the wounds inflicted by a racist society in their capacities as religious refuges, community centers, and social service agencies.

Their growth across Hawai’i, the Pacific Coast, and the interior West, whether in bustling metropolises or rural outposts, was dizzying. Between 1899 and 1904 alone, temples under the aegis of the Buddhist Mission of North America (BMNA), the umbrella organization for Shin Buddhists affiliated with the Jodo Shinshu Hongwanji-ha sect, opened in rapid succession in San Francisco, Sacramento, Fresno, Seattle, Oakland, San Jose, Portland, and Los Angeles. 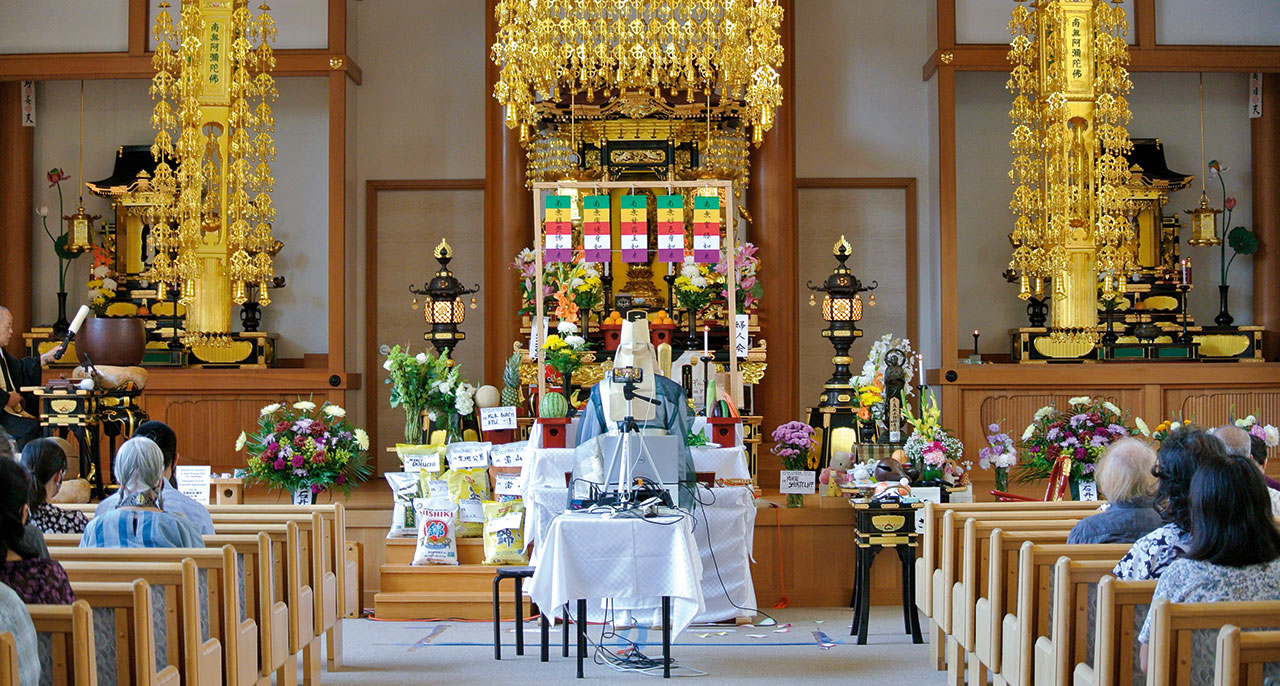 Undeterred, Buddhists continued to practice their religion behind barbed wire. Although the BMNA dissolved during the war, a successor, lay-led organization, the Buddhist Churches of America (BCA), emerged. During the postwar baby boom, the BCA saw a breathtaking growth in membership. New temples were built in the American West and, because of the government-engineered dispersal of Japanese Americans, in places as far-flung as Minneapolis, Chicago, New York, New Jersey, and Washington, D.C.

Despite deep roots, Pure Land and other schools of Buddhism practiced by Asian Americans have been marginalized, if not erased, in American Buddhism, often at the hands of white converts. There’s an assumption that Pure Land is not “real” Buddhism because the BCA has a veneer of Christianity (temples are called churches and priests are addressed as reverends) and because followers are erroneously believed to worship Amida as a god.

Paradoxically, due to rituals that have traversed time and space, “Asian and Asian American Buddhist practices have often been dismissed as superstitious, inauthentic (yet authentically exotic!) forms of Buddhism,” Funie Hsu argues. “In mainstream white American Buddhist conversations, white Buddhists are often heralded as the erudite saviors and purifiers of Buddhism.”
Yet Pure Land Buddhists refuse to be defined on those terms. American Shin Buddhism is experiencing a dynamic moment as its followers use the radical equality of Shinran’s teachings to inform struggles for social justice. As he writes in the Kyogyoshinsho: “There is no discrimination between the noble and humble, or black robed monks and white clothed laity, no differentiation between man and woman, old and young…. It is like the medicine that eradicates all poisons.”

Pure Land Buddhists have applied the spirit of nondiscrimination, as well as other dharma cornerstones such as interdependence and no harm, to alleviate the suffering wrought by inequality. Although not without controversy, this includes advocacy for issues from same sex marriage to racial justice in the context of the Black Lives Matter movement and recent anti-Asian violence.

But rather than being a proscriptive mandate, engaged Shin Buddhism emphasizes the need to first reflect on our imperfect selves driven by the three poisons of greed, anger, and aversion. The BCA Ministers Association, for example, penned a “Statement in Support of Black Lives Matter and in Opposition to Racism” that noted: “With the Buddha Dharma as our guide, let us help with the work to dismantle systemic and institutionalized racism, both within ourselves and our organization and in the community around us.” 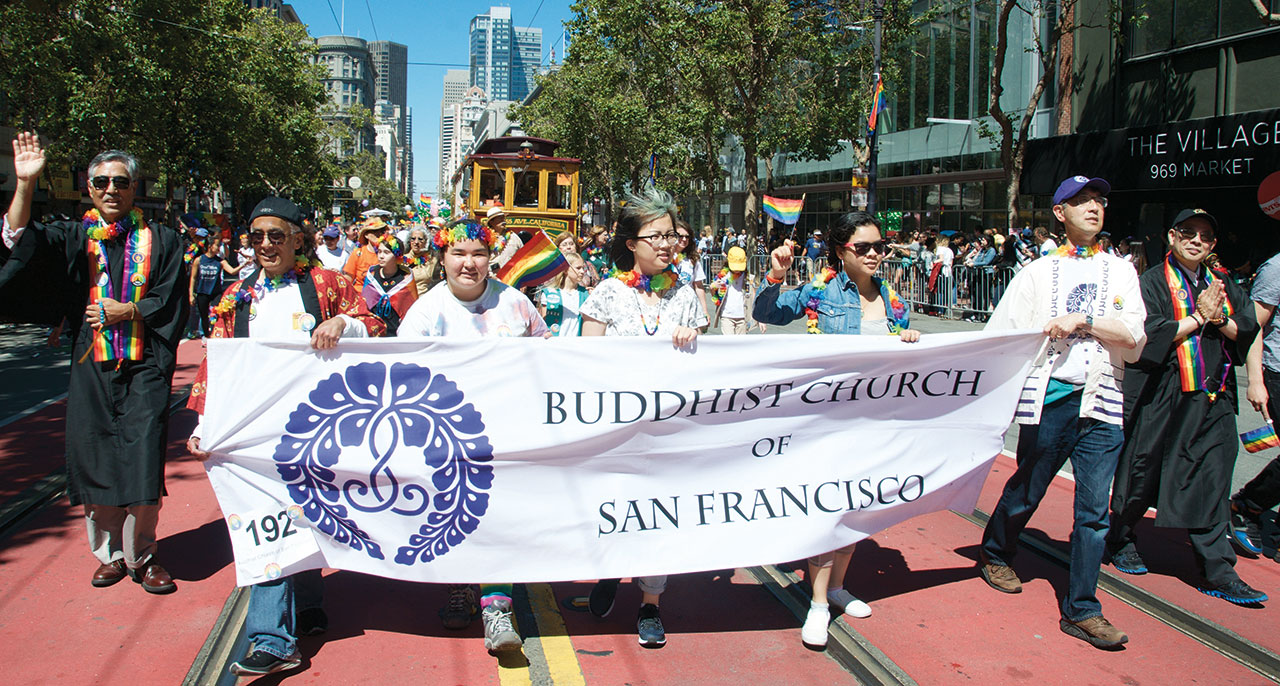 Members of the Buddhist Church of San Francisco, a Shin community, march in the city’s 2017 Pride parade. Photo by Keith Kojimoto

This call for introspection reflects Shinran’s teachings that despite our manifold human flaws, we are the beneficiaries of all life. When we realize this, we may feel at once humbled and motivated to approximate the Great Compassion that we receive.

Back in the 1890s, when a very different cohort of young Buddhists pooled their collective hope and energy to nurture the dharma seeds on this harsh and hostile shore, little did they know how their efforts would blossom more than a century later into a distinct and resilient American Pure Land Buddhism.