The interactive exhibition, based on the Buddhist figures Padmasambhava and Maitreya, takes traditional Buddhist imagery in radical new directions. 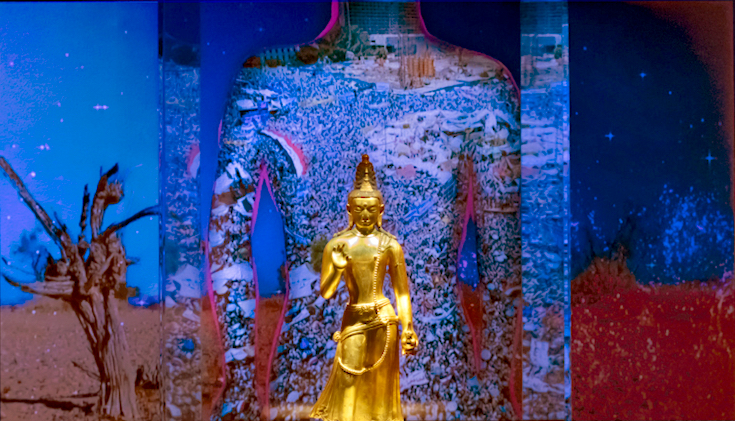 This year, the Rubin Museum of Himalayan Art in New York City has been exploring the future. That is, in a series of exhibitions, the museum has been exploring the idea of the future through art and philosophy. One of the most striking exhibitions in the series is Chitra Ganesh’s exhibition The Scorpion Gesture, a series of five large-scale animations that intersplice traditional Buddhist art and modern graphics. The animations are interspersed with traditional artworks in the museum, projected onto walls alongside and behind statues and scroll paintings. Three of the five animations are motion activated, appearing when a viewer approaches.

In one work, “Rainbow Body,” a group of people wearing 3-D glasses watch the deity Mandarava attain enlightenment in a cave, mirroring a traditional painting of Mandarava in a cave nearby. Another animation, “Sillhouette in the Graveyard,” appears on the wall directly behind a gilt copper sculpture of Maitreya. In the animation, a deity figure stands up out of a river of blood as images of political protest and climate change appear on and around her body.

In the quiet, contemplative space of the Rubin’s second and third floors, the animations feel radical yet mesmerizing, referencing and remixing the traditional aesthetics that surround them, imbuing the centuries-old esoteric pieces with contemporary political and emotional meaning.

The exhibition bases itself on the Buddhist figures of Padmsambhava and Maitreya, the future Buddha. Ganesh says that when the idea of the installation was proposed to her, she knew little about Padmasambhava.

“It was fascinating to learn about Padmasambhava’s role in traveling Buddhism across South Asia,” says Ganesh. “His birthplace, Uddiyana, is located in what is currently understood to be the geographic area of the Swat Valley in Pakistan, and he is celebrated as the Second Buddha who introduced Buddhism to Tibet. In the process, I thought about the ways in which some of the actual locations referenced in these stories continue to be flashpoints of great political importance and conflict today.”

Maitreya, on the other hand, is the future Buddha, prophesied to arrive on Earth at a time of global crisis.

“The invocation of such a figure has uncanny alignment for me with some shifts in our contemporary political climate, with a growing turn to authoritarian ideals and leadership in many countries, and a resulting polarized citizenship, not to mention the threat of ecological disaster that looms large every day.”

Throughout her career, Ganesh’s work has used the structures of classical mythology as a medium to tell new stories. Where paintings of old Tibetan scholars might feel remote and inaccessible, Ganesh blends them with images of protest and modernism, creating a bridge between the old and the new — an access point from which the viewer can consider the traditional imagery.

The title of the exhibition, “The Scorpion Gesture,” is a reference to a Buddhist mudra. “The mudra known as the scorpion gesture is said to have unlimited power and potential for transformation,” says Ganesh. “The potential for transformation, both physical and psychic, across pre-conceived boundaries of gender and political position, is a long held inspiration for my work.”

Ganesh worked with curator Beth Citron and animation studio The STUDIO NYC to create the animations, spending months researching Buddhist concepts and artwork and developing the animations. Paintings and sculptures incorporated in the animations had to be re-photographed at high resolution.

The Scorpion Gesture is on view through January 7, 2019.