“The next Buddha may be a sangha,” Thich Nhat Hanh famously said, and the practice of community was always central to his life and teachings. Dharma teacher Mitchell Ratner experienced the wonders, lessons, and challenges of living the mindful life at Plum Village. 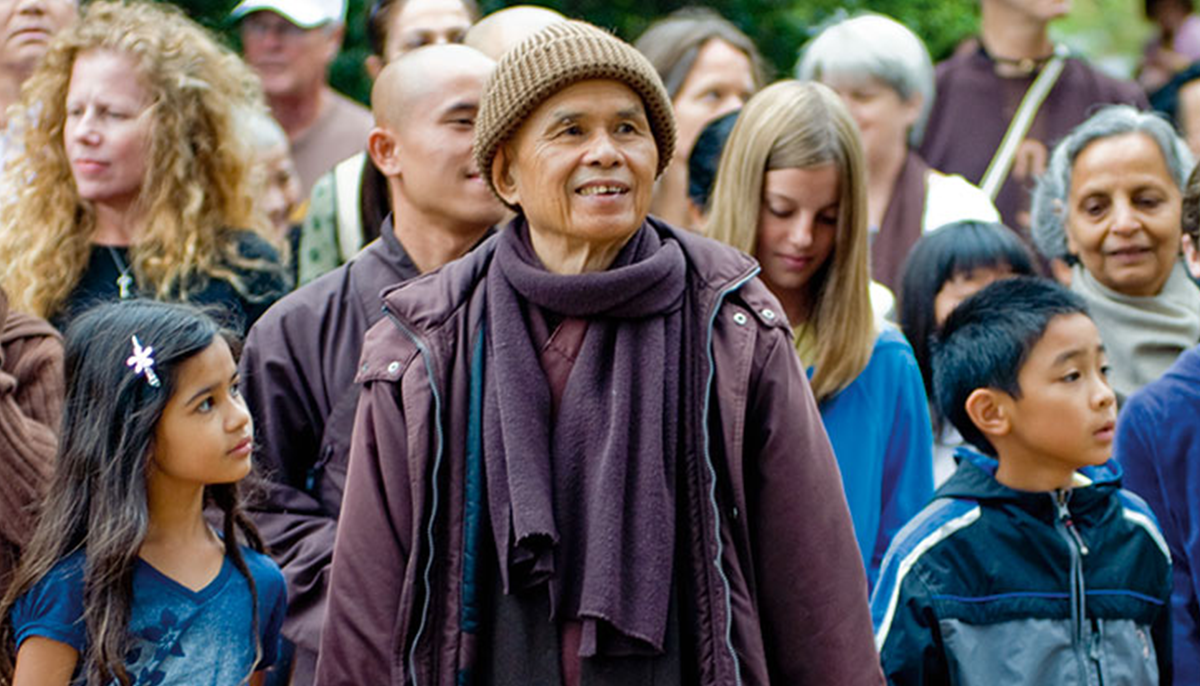 “You do not have to practice intensively,” said Thich Nhat Hanh. “Just being in a sangha where people are happy, living deeply the moments of their days, is enough.” Photo by Don Farber

In December 1990, I was among two hundred people who sat with Thich Nhat Hanh at the Lincoln Memorial in Washington, D.C. We listened to him read poems from the Vietnam War years and reflect on his efforts to share with Americans the suffering caused in both countries by the war. Then we walked silently, reverently, past the Vietnam Veterans’ Memorial.

I was deeply impressed by the quality of his presence, the flowing calmness of his words and actions, and the remarkable effect he had on others. At a conference the day before, I had heard him speak softly about love, anger, compassion, and finding peace and joy in each step, in each action. Finding peace and joy in each moment was a lovely idea, but how could I weave that way of being into the fabric of my urban American life?

When you are alienated from your roots, you seek buddhas. When you are in touch with who you really are, you are a buddha” —Thich Nhat Hanh

I did not have an answer to my question, but I knew at a gut level that I could learn a lot from Thich Nhat Hanh. Six months later I had the opportunity to ask him, “What next?” He encouraged me to come practice with him at Plum Village, his retreat center in France, and in November 1991, I set off for a three-month winter retreat there.

Plum Village was then two farm complexes, or “hamlets,” about two miles apart in the Dordogne valley, an hour’s drive from Bordeaux. The region offers vistas of small farms and vineyards, gently rolling hills, historic châteaus, and picture-perfect clouds and sunsets. Daily life at Plum Village was fairly relaxed. Before breakfast and before retiring, the community gathered in meditation halls for an hour of sitting and walking meditation and the reading of a short sutra. Before lunch residents did outside walking meditation together for about thirty minutes, followed by the ten mindful movements, a series of tai chi–like stretching exercises. Aside from the silent meals, on most days the only other scheduled activity was a work period of two to three hours. Twice a week, the hamlets gathered for dharma talks by Thich Nhat Hanh.

I was very happy to be in Plum Village. There were so many wonderful things for me to learn! The way I had been trained to learn was through studying, so I threw myself into reading Thich Nhat Hanh ‘s books late into the night. I took notes and developed charts, glossaries, and Sanskrit word lists. I initiated discussions with advanced students about the meaning of key terms like “emptiness” and “samsara.”

Three weeks after my arrival, Sister Annabel, then the director of practice, asked me after the evening meditation if I wanted to gain something from my stay at Plum Village, something I could carry home with me. I thought to myself, excitedly, “Here it is, my study has paid off: Sister Annabel is going to pass on to me the central organizing principle that will make sense out of it all.” But her advice was not what I expected. With a slight tone of reproach she said, “Mitchell, everywhere you go should be walking meditation.” 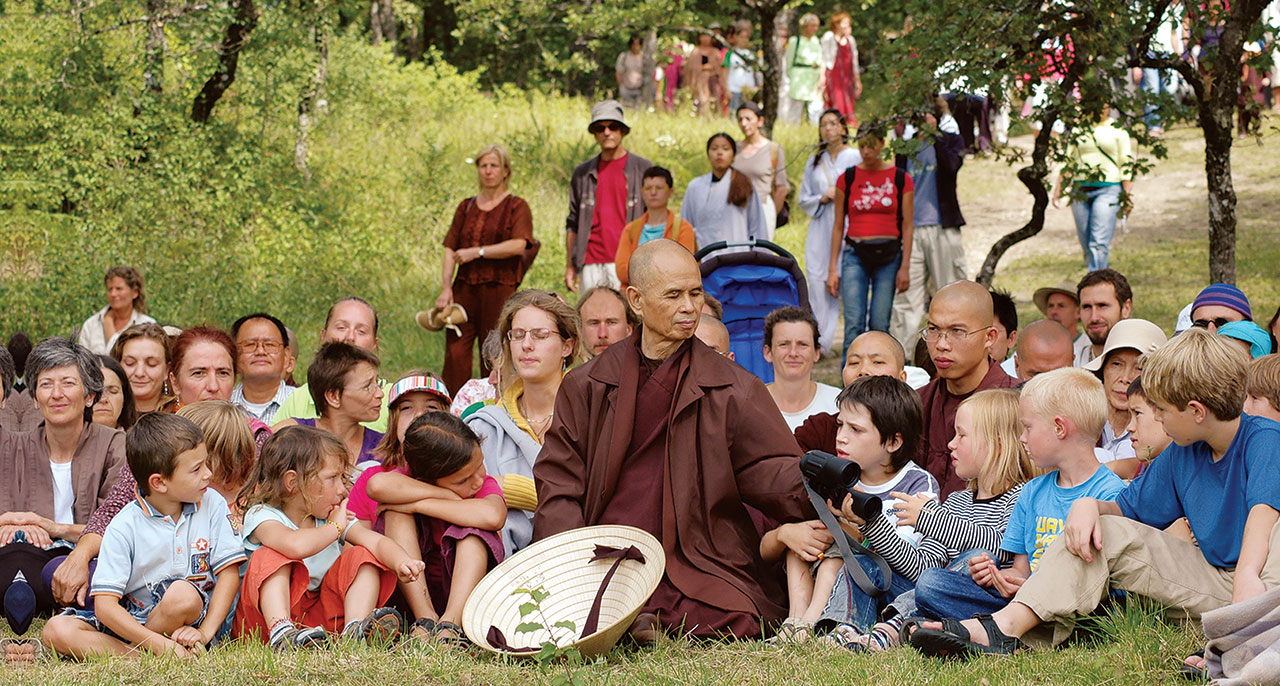 “When I look at a child,” said Thich Nhat Hanh, “I always see him or her as a flower: fresh, beautiful, and open to the moment.” Photo courtesy of  LANGMAI.ORG

The behavioral ethic of the Plum Village community is to carry out each activity mindfully, working calmly and giving it our full attention—whether it is cutting carrots, tying your shoe, walking to the bathroom, or writing a letter. By acting in this way, everything we do becomes more real, more authentic. At Plum Village I could see the transformative power of this practice. The presence I had found so remarkable in Thich Nhat Hanh when I first met him was embodied, in varying degrees, by each of the monks, nuns, and long-term residents.

Plum Village was a place of wonderment. But it was also a human community—of monastics, residents, and visitors of very different backgrounds, with different capacities and ways of embodying and expressing the spiritual lessons of Thich Nhat Hanh. Misunderstandings and tensions were inevitable. It was easy to get caught up in the ongoing drama of who was doing what and why. It was especially easy for me to get caught up in the drama when my feelings were being hurt, when others were not acting or responding in ways I desired. When I was puzzled, hurt, or confused, I sometimes questioned all that I had learned at Plum Village. Without really realizing it, a part of me implicitly tied attunement to the present moment, the teachings of the Buddha, Thich Nhat Hanh as a person, and Plum Village as a community, into a single conceptual package. I couldn’t separate the message from the messenger.

That changed one brisk winter morning during a stay in 1996. As Thich Nhat Hanh often did, after his dharma talk he led the community in walking meditation to an open space in the plum orchard. Instead of returning to the dining hall for lunch, Thay took a few steps forward and repeatedly motioned for everyone to come closer. The thirty of us in the circle moved in, bit by bit, until we were closely crowded around him.

He spoke softly, in English, looking directly at us. “With each step you have to say: I have arrived. l have arrived. Whether your home is in Washington or New Delhi, you have to come home to this moment. You have to be here with each blade of grass. This is nirvana. This is the kingdom of God.

It was an extraordinary moment. Standing there in the orchard, I could feel his determination, his sincerity, his great desire to teach this simple truth, as a physical presence. When that energy entered me, it melted the bonds that had held together the conceptual package of message and messenger. Suddenly I realized that I was free to trust the present moment, wholeheartedly, unreservedly. I could trust wholeheartedly and still honor and embrace the hesitations I sometimes felt.

Although the realization gave me permission to have hesitations, in practice I had fewer. I found that I could be more tolerant of a perceived shortcoming because I had less riding on it. Conflicts arising out of cultural misperceptions, or thoughtlessness arising out of human frailties, could be seen as just that, not as threats. My peace and happiness did not depend on anyone in the community being perfect, much less everyone. It came as a great relief to let go.

Many of us who look for spiritual comfort do so because of the wounds we have received. We want an explanation that we think will make the unhappiness go away. One of the great gifts of Thich Nhat Hanh and of Plum Village is to turn us back on ourselves—back to our own experiences, our own lives.

Thinking alone can take us only so far. The disembodied intellect can compare, contrast, and perform logical operations, but without an intimate awareness of our lived experience, we are constantly batted about, vaguely or acutely dissatisfied, hoping to solve with our heads that which can only be solved by our hearts, heads, and awareness working together. The beginning and end points of this spiritual journey are wonderfully captured in two lines from a talk Thich Nhat Hanh gave several days before the instructions in the orchard:

“When you are alienated from your roots, you seek buddhas. When you are in touch with who you really are, you are a buddha.”

Over the years, I’ve looked for and found ways to bring the spirit of Plum Village home with me, to my everyday life in an American city. What helps me most are bells of mindfulness. Real bells, such as from our grandfather clock, and metaphorical bells, such as the red of a stoplight, gently remind me to return to the present moment. Gradually there seems to be more calm and balance in my life, a growing inner stillness.

Every once in a while, when I catch myself naturally falling into a more mindful way of doing something, such as being aware of my feet and breath as I climb stairs, I smile inwardly to Thich Nhat Hanh. I recognize that his spirit has entered my stair-walking and that, as he taught, the boundaries between us are more illusory than we believe them to be and the interconnections much more real.

Mitchell Ratner is founder of the Still Water Mindfulness Practice Center in Maryland.