In China Root, David Hinton invites the reader to reexamine Zen through its roots in Taoist teachings. Here, he takes a Taoist lens to the idea of “Buddha” itself. 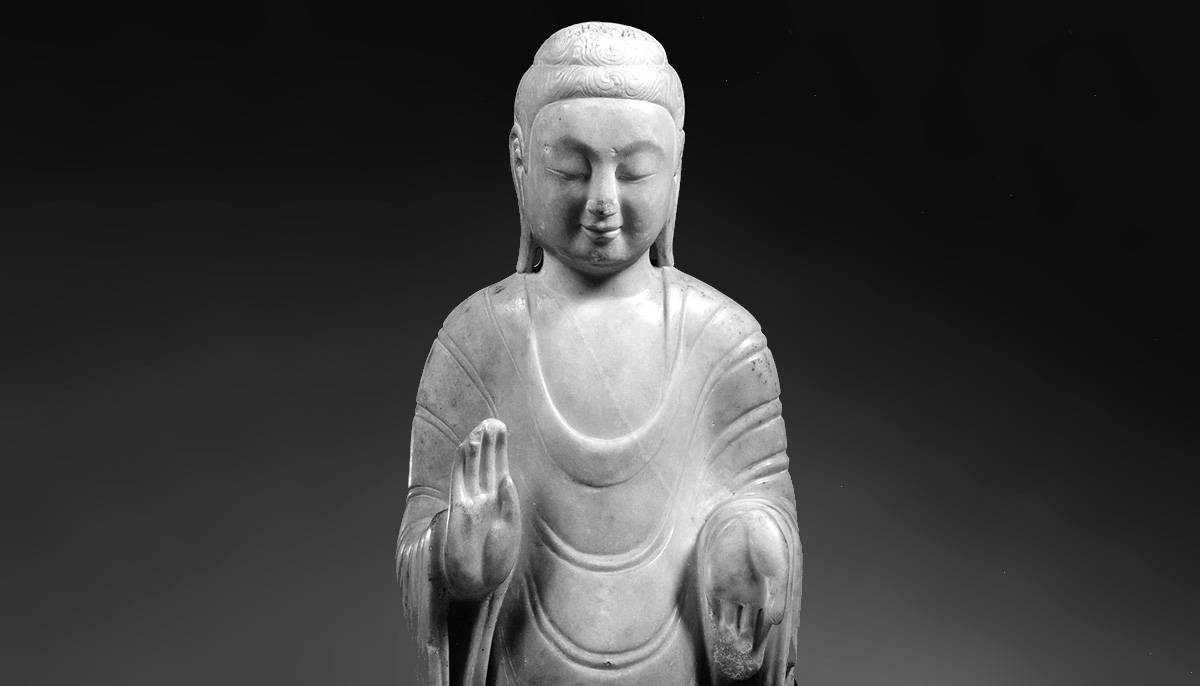 Buddha refers most literally to the historical Shakyamuni Buddha, of course: the Buddha of Buddhism, the origin and center of it all. As such, Buddha was a prime target for the Ch’an wrecking-crew’s project of dismantling ideas and certainties, for as long as we are captivated by the idea of Buddha and his teachings, as long as we try to understand them, we have not come to empty-mind immediacy of thusness. Hence, the only way to realize Buddha-mind is to erase Buddha and his teachings. And the only way to become Buddha is, famously, to kill Buddha. This demolition of Buddha is a recurrent theme in Ch’an liter­ature and the practice it describes. On the one hand, Buddha is ridiculed, denied, and erased. And on the other, Buddha is described in paradoxical ways meant to break down concep­tual thinking by deconstructing what appears to be the most essential project for conventional Buddhists: to understand Buddha and his teachings.

The question “What is Buddha” appears over and over in the Ch’an literature, as a foundational question asked of var­ious masters, and the answers are wildly paradoxical and con­tradictory, as in these examples:

Flax. Three pounds.
Mountains are all around us here.
Dry shit-wipe stick!
You

Such answers intend to replace abstract ideas about Buddha and his teachings with strikingly immediate images of thusness and therefore empty-mind. Similarly, Patriarch Sudden-Horse Way-Entire (Mazu Daoyi), one of the most influential of all Ch’an masters, is asked this question numerous times. Once he answers: “This very mind is Buddha.” Then another time, he responds: “Not mind, not Buddha,” an answer that has several effects. First, it perfectly contradicts his first answer. And second, it erases Buddha and all he means to Buddhism, while at the same time simply dismantling the question itself.

‘Buddha’ is absorbed wholly into the Taoist cosmology, becoming another term used to describe the generative tissue at the source of all things in both the mental and physical realms.

Beyond using him as an element in storytelling, Ch’an is primarily interested in Shakyamuni at the deep level of his essential nature: that open space of consciousness he culti­vated through meditation under the bodhi tree. So for Ch’an, Buddha is most essentially the “empty-mind” that remains once we finish asking what Buddha is, emphasized in the terms buddha-mind and buddha-nature, synonymous with empty-mind and original-nature. When Sudden-Horse Way-Entire says Buddha is “not mind,” his intent is performative rather than descriptive: as so often in Ch’an, he is enacting insight, trying the open empty-mind as Buddha-nature in the questioners by dismantling their analytical thought. And to take a more direct example, the Platform Sutra gives a version of the famous poem by Prajna-Able (Huineng) in which the “brilliant mirror” becomes “buddha-nature”:

In his poetic distillation of Ch’an, Bodhidharma de­scribed awakening as becoming Buddha: “seeing original-nature, you become Buddha,” and that “original-nature” is, of course, empty-mind. The Second Patriarch put it simply and directly: “Mind is Buddha.” And Yellow-Bitterroot Mountain (Huangbo) said: “Buddha is originally mind, mind all emptiness empty.” This insight was central throughout the tradition, where awak­ening to empty-mind as original-nature is often described as meeting Buddha and the patriarchs face-to-face, or as being indistinguishable from them. For in empty-mind, conscious­ness is without that center of identity that would distinguish us from Buddha. What remains is empty consciousness itself, the cosmos looking out at itself, which is in itself the same gaze whoever and wherever the individual may be. This empty mirror-mind experience was also, for ancient Chinese artist-intellectuals, a way of communing absolutely with friends. It was a common activity for friends to gather and share mirror-deep perceptual experience: perhaps meditating together, perhaps sipping wine (which, not unlike meditation, eases the isolate ego-enter away), and then gazing at a mountain land­scape or a rising moon. And that meant sharing something deeper even than the identities we think of as the subjects of love and friendship. This leads to a profound sense of sangha.

The perceptual clarity of empty mirror-mind is the very na­ture of this buddha-mind, and of course that buddha-mind is open and mirror-deep always, however mundane and everyday our experience. This leads to the Ch’an insistence that we are always already Buddha, always already awakened.

At these deep levels, Buddha is also indistinguishable from dharma, as put concisely by the Second Patriarch: “Mind is Buddha. Mind is dharma. Buddha and dharma: they aren’t two separate things.” This is an instance of cosmological/ontological distinctions collapsing together and re­vealing the thusness of the ten thousand things as the true wordless teaching. For it is thusness that returns con­sciousness to empty-mind or Buddha-mind. In the Ch’an collapse of cosmological/ontologi­cal distinctions, we find Tao in its most dramatic manifestation. For China’s empiri­cist artist–intellectuals, reality seen whole was the only possible object of veneration: Tao, the great ongoing transformation of things.

Ch’an invests empty-mind with Taoist ontology/cosmology, making empty-mind indistinguishable from Tao. Hence, Buddha is absorbed wholly into the Taoist cosmology, becoming another term used to describe the generative tissue at the source of all things in both the mental and physical realms—a fact revealed most succinctly in the term Buddha-Way (Tao). Or in the Chinese transliteration for Tathagata, a name for Buddha as the “thus-come” or “thus perfected one”: “existence-tissue ar­rival.” So, to become Buddha is to move as empty-mind at that generative origin-moment/place, as Yellow-Bitterroot Mountain suggests when he repeatedly calls empty-mind the “pure-clarity source-tissue Buddha of origins.”

Read an interview with David Hinton and Randy Rosenthal about China Root: “The Root of Zen”

David Hinton is the translator of such seminal works as the I Ching, Tao Te Ching, and the Analects of Confucius. He has received numerous awards for his work, including a lifetime achievement award by the American Academy of Arts and Letters. His most recent book is China Root (Shambhala, 2020).