Andrea Miller reflects on the truth that interbeing is as close to us as the white on rice. 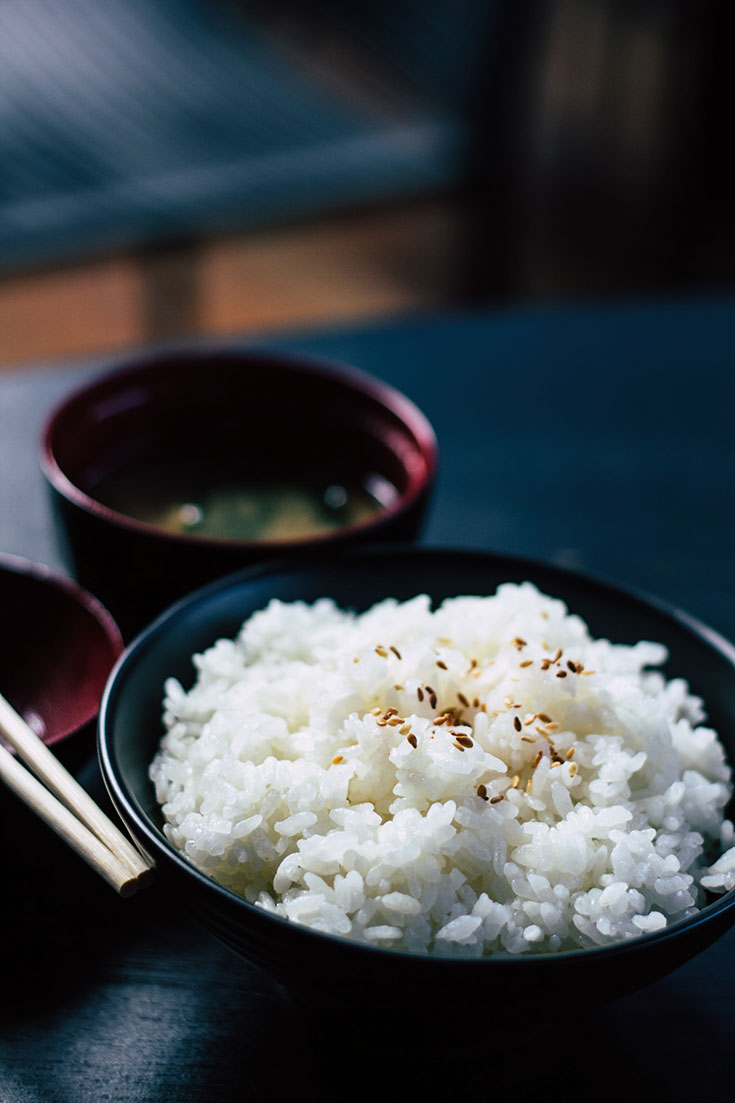 At the elegant home of a friend of a friend, the hostess served me a generous portion of sticky rice. Although I was perfectly capable of using chopsticks, I felt incapable of eating this bowl of plain, unadorned starch.

I was twenty-four at the time and had been living outside of Kobe for many months. So I knew that in Japan it’s considered good manners to finish your rice down to the last grain, and bad manners to pour soy sauce on it. But I’d grown up in the West, with long-grain rice, which I’d been free to douse with soy sauce (of dubious quality) right at the table, and I couldn’t conceive of how to eat my way out of this situation politely. Without sauce, I could not choke down the entire bowl.

It’s easy to dismiss rice as being tasteless, blank, nothing. Yet if eaten with mindfulness, it does have a subtle sweetness or nuttiness. Even more importantly, rice is a foundation on which spires of other contrasting flavors and textures can rest, reach higher. This is true wherever you find yourself in the world: in Canada with a Wednesday night dinner of Shake ’n Bake chicken, canned wax beans, and Minute Rice; in Japan with an exquisite platter of jewel-like maki and nigiri; or in Mexico with a refreshing pitcher of horchata—cantaloupe cubes and pecans bobbing in the sweet, milky liquid.

Take the rice out of these culinary experiences, and even the tastiest morsels on your plate or in your cup can feel relentlessly intense. Rice may be largely empty of its own intrinsic flavor, but that’s exactly why so many great rice recipes have manifested.

Rice, for me, is the ultimate ingredient of interbeing, even if the grains don’t all stick together. Interbeing is what Thich Nhat Hanh calls emptiness or dependent origination. It means that nothing comes into being on its own. Phenomena only emerge due to causes and conditions coming together; things only exist in dependence on other things. They inter-are.

In the Rice Seedling Sutra, the bodhisattva Maitreya offers an example of the chain of causality: “From a seed comes a sprout, from a sprout a leaf, from a leaf a stem, from a stem a pedicel, from a pedicel a pistil, from a pistil a flower, and from a flower comes a fruit. If there is no seed, the sprout cannot arise and so on, until finally, without the flower, the fruit cannot arise.”

Moreover, Maitreya teaches, a rice seed will not flourish unless soil is there to support it, water to moisten it, and the sun to ripen it. Remove any of these or other necessary conditions, and there is no rice.

When described this way, dependent origination might sound like basic botany. In a way it is, but it also marks a radical shift in how we view the world. After all, if we lift our gaze from the rice seedling and turn the lens of dependent origination on ourselves and everything around us, then we realize that, despite appearances, there is no separate self. We and everything around us are empty of independent existence. Causes and conditions have come together to create certain forms, such as us, and when causes and conditions change, those forms will fall away and take another form. No matter how enduring or solid something may seem, it won’t last.

Zen master Shunryu Suzuki once explained it this way: “Zazen is too big of a topic. Brown rice is just right. Actually, there is not much difference.… To eat and digest food is natural to us, as we are always changing. This organic process is called ‘emptiness.’ The reason we call it emptiness is that it has no special form. It has some form, but that form is not permanent. While it is changing, it carries on our life energy.… Emptiness can be understood when you are perfectly involved in chewing rice.” 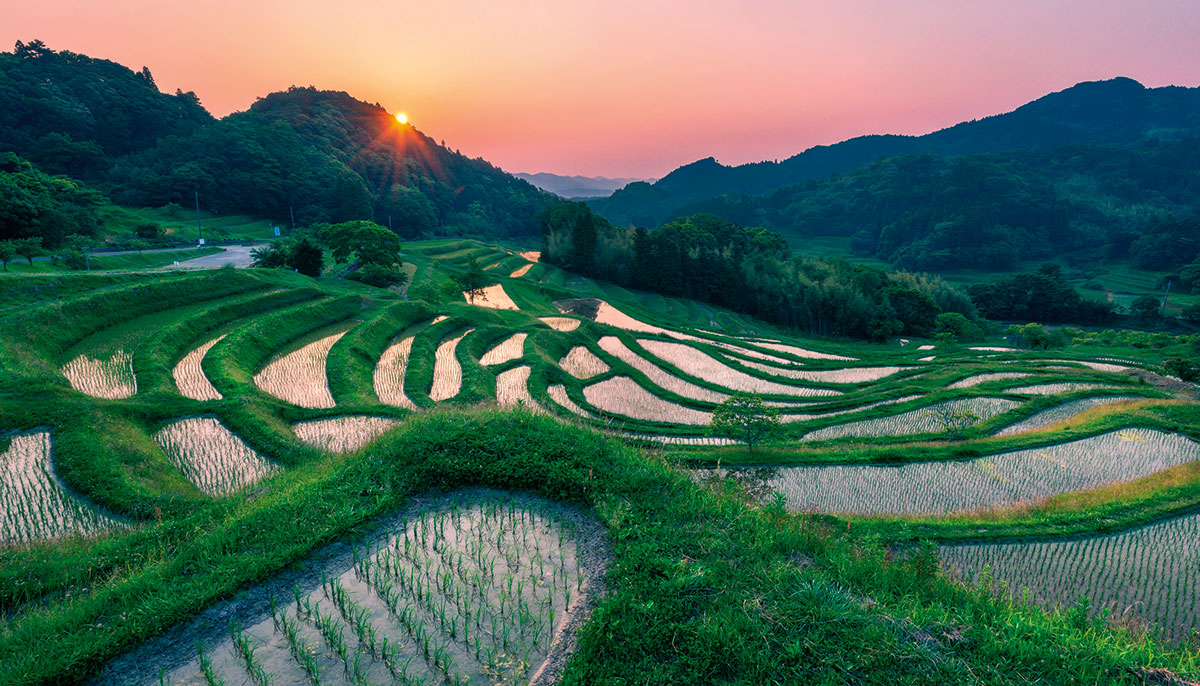 The teachings on dependent arising are so central to Buddhism that, according to the Rice Seedling Sutra, the Buddha—while contemplating a rice seedling—said, “Whoever sees dependent arising, sees the dharma.” Of course, the Rice Seedling Sutra could just as easily have been the Barley or Tomato or Strawberry Seedling Sutra, because any plant can serve to illustrate the concept of interbeing. Yet it feels particularly fitting that it’s rice, which is today the world’s most important food crop, providing one-fifth of all calories consumed by humans.

Thomas Talhelm of the University of Virginia led a study of Han Chinese communities that compared the worldviews of people living in rice-growing regions to those in wheat-growing areas. The findings suggested that growing rice leads a culture to become more cooperative, more focused on collective harmony, and more aware of interdependence, while growing wheat creates a culture that places a higher value on independence and individualism.

This seems due to what these crops require. Wheat can be grown independently by a farmer, but rice depends on the collaboration of a community. So wheat, apparently, can trick a society into thinking that an individual’s harvest is due to his or her efforts alone. But in fact, the wheat seedling is no different than the rice seedling. Remove the sun or the water or the other essential causes and conditions, and there is no sandwich.

Of course, if you’re like me, you don’t grow your own food. So when you sit down to dinner, even more causes, conditions, and beings are required for your sustenance—the farmers, the truck drivers, the grocery-store clerks, and others. This is all the more reason to recognize that even the simplest ingredients, like rice, are miracles of collective effort and warrant our reverence. As is recommended in Dogen’s Instructions to the Cook, “Care for water and rice, as though they were your own children.”

But maybe each of us needs to care for rice in our own way. So now I circle back to the bowl of rice that was put in front of me on that fine table in Kobe.

I did try to eat it, and I managed to swallow two white bites. Then I decided to be direct.

“Please forgive me,” I said. “I realize it’s rude in Japan to put soy sauce on rice. In Canada, though, we don’t eat rice plain. Would you mind terribly if I put some soy sauce on this?”

If anyone at the luncheon took issue with my table manners, they did not let on. “No problem,” they assured me.