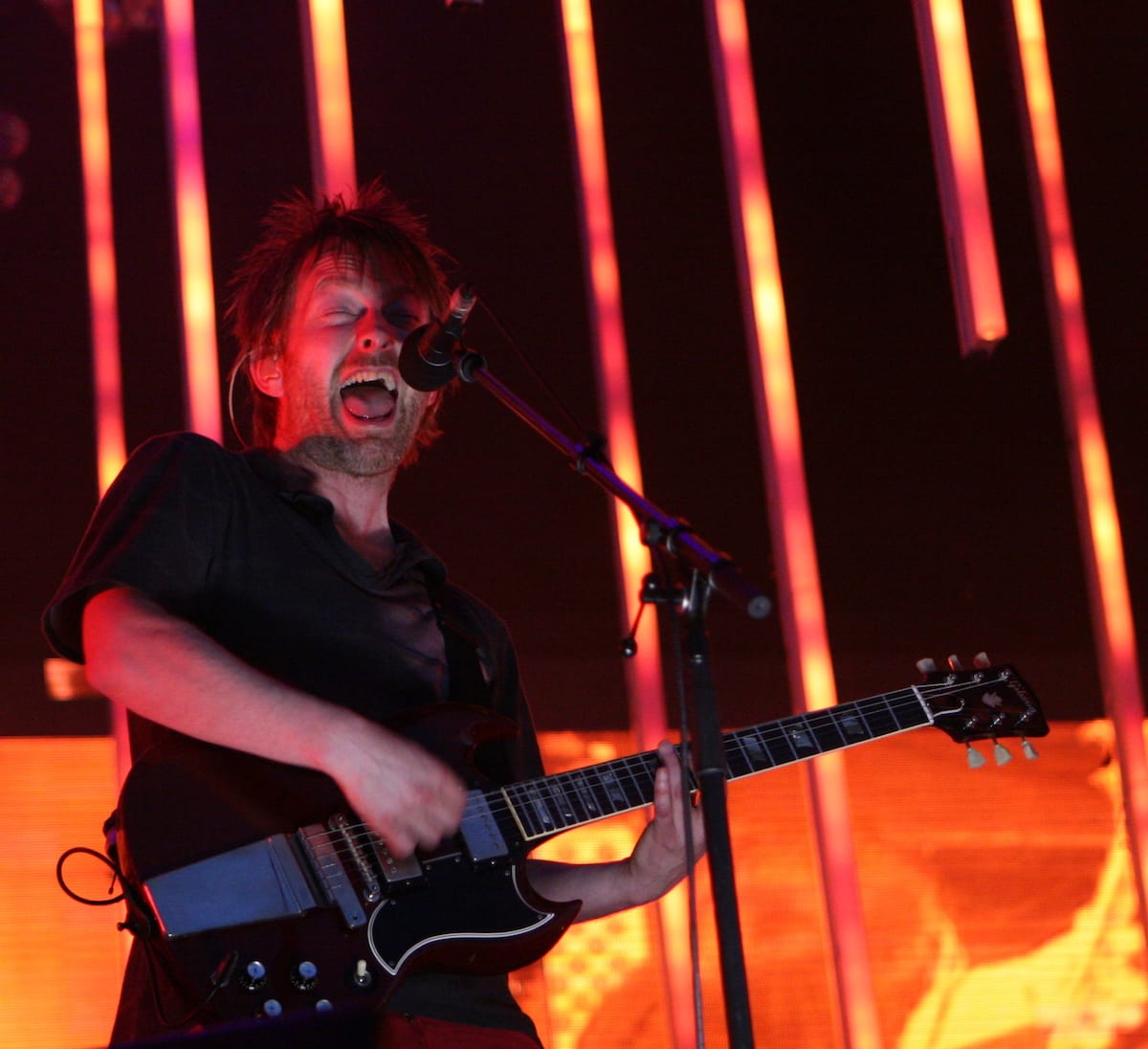 In the next world war/in a jackknifed juggernaut/I am born again/in the neon sign scrolling up and down/i am born again/in an interstella burst/I am back to save the universe.
—”Airbag” by Radiohead

Earlier this year my son Arthur introduced me to the British rock group Radiohead by playing their song “Karma Police.” My curiosity about the Buddhist reference overcame my parental apprehension about his interest in alternative rock and what my husband and I perceive to be its associated vices. It’s easy to forget that I survived a similar passion starting with the likes of Screaming Jay Hawkins and Clarence “Frogman” Henry on black radio in Norfolk, Virginia. This was in the days before Buddy Holly, Elvis and the Beatles.

Listening to Radiohead’s CDs, I was intrigued by the band’s ability to combine desolate lyrics with uplifting melodies. Any irony was overridden by the beauty of lead singer Thom Yorke’s voice, especially when soaring in falsetto range. However bleak and cold the modern landscape sketched by the lyrics, a transcendent optimism, perennial as grass, emerged through the cracks in the cement.

I wanted to interview this thoughtful young man Thom Yorke and find out why he was drawn to the cause of Tibet. This summer’s Tibetan Freedom Concert was the second he and his band had played, and on the second day of the concert, we were ushered into Radiohead’s dressing room tent next to the stadium and introduced to Thom. I sat down beside him on the couch and my son Arthur took a chair. I took out my long list of questions; Thom said, “Blimey!”

Judy Bond: First of all, let me thank you as a parent.

Judy Bond: My generation has screwed things up.

Judy Bond: And Rome is burning.

Judy Bond: And so for us parents, I’m very grateful that you’ve become a light in the darkness. I worry about him (I motion toward Arthur).

Thom Yorke: (to Arthur) There you go.

Judy Bond: So let me thank you for maintaining your optimism.

Thom Yorke: Well, I’ve been reading a lot about the fifty years since the Second World War, about Western foreign policy and all that. I try not to let it get to me, but sometimes I just think that there’s no hope. Then I realize, “Well, hang on, that’s what they’d love us to believe.” It’s a fight, a mental fight. I grew up under Thatcher. I grew up believing that I was fundamentally powerless. Then gradually over the years it occurred to me that this was actually a very convenient myth for the state.

Judy Bond: So you’ve chosen to exert your power by helping the Tibetan cause. I understand you were very moved by the first Tibetan Freedom Concert you did.

Thom Yorke: I was very moved indeed. It came at a crucial point for us; it was the beginning of promoting our album “OK Computer.” We were very nervous and didn’t know what to expect, but when we came backstage, there was a little note saying, “Please leave your egos behind.” That was a big thing for me. Coming from Britain, I was terrified of meeting all these other artists, because artists over there tend to fight with each other a lot, the premise being that there’s not enough room for everybody. But we got over here and all the other artists were incredibly friendly.

Judy Bond: You spoke eloquently at the press conference about the plight of the Tibetan people. How did you get interested in the Tibetan cause?

Thom Yorke: Well, I really got interested in it when I bought a copy of The Tibetan Book of the Dead, translated by Robert Thurman. There’s a great introduction to Buddhism in that, a good twenty pages. Then I read Sogyal Rinpoche’s The Tibetan Book of Living and Dying, which didn’t feel like a religious book in the normal sense. It felt like common sense from start to finish. I guess that’s what wisdom is, really. It’s the most extraordinary thing I’ve ever read.

The problem is, I cannot meditate. That’s the one thing I can’t do. That’s the thing that’s driving me nuts. I have a house by the sea, and I can sit and listen to the sound of the sea and eventually . . . but I can’t really do it. I think there are lots of reasons for it. My excuse has always been that music does it for me. I think it does, but not often enough to justify saying that. It’s the same kind of thing because you are not wrapped up in your thoughts anymore. So when it works it’s really good.

Judy Bond: It was very good of you to break your holiday after the world tour and come back from England to donate your performance this weekend and appear tomorrow at the rally.

The thing about the Tibetan cause is that it’s a bit more positive—because of the nonviolence element and because there is no China-hating involved. Then it makes a bit more sense.

Thom Yorke: I couldn’t have lived with myself if we hadn’t done it. It’s like trying to give something back after a year of taking and taking. For me and I think for most of the artists here, Tibet is the final test. If they let Tibet be wiped out then…

Judy Bond: This is not the first cause that you’ve promoted. There was something called Warchild.

Thom Yorke: Yeah, it’s about the Bosnian crisis principally. Generally speaking I think that sometimes charity is cosmetic. I mean, the only reason the Bosnian situation got out of control was that the U.N. and Western Europe turned a blind eye. Leading up to the war, they kept having these talks: everyone turns up in suits with briefcases, including the Serbs, and just because they sat down at what the Western Europeans deemed their level, they were fooled blind. The Serbs committed mass murder, genocide, the most revolting crimes, but if they send someone off in a suit with a briefcase, then everything is fine. It’s completely cosmetic. I think sometimes all the charities are doing is mopping up the blood. It’s a shame. This is the black hole I always get lost in, so I’ll pull myself out now.

The thing about the Tibetan cause is that it’s a bit more positive—because of the nonviolence element and because there is no China-hating involved. Then it makes a bit more sense.

Judy Bond: There’s a moral stance you take with your audience.

Thom Yorke: Yeah, which is dangerous. But there you go.

Judy Bond: Well, you’re up there in a position where people listen to what you say. I appreciate that you do that for them.

Thom Yorke: That comes from my dad, actually. My dad spent his whole life getting into fights for telling what he believed to be the truth. Basically it comes from my dad—and he’s screaming right-wing, so there you are.

Judy Bond: Going back to the nonviolence that’s being promoted here, I’ve read that because of other children teasing you about your damaged eye, you had to defend yourself with your fists.

Judy Bond: Looking back on those years now, how do you feel about the fighting?

Thom Yorke: (long pause) Well, it only dawned on me about six months ago that not everybody’s against me all the time. It was something of a revelation (laughing) . . . that’s all I can say really.

Judy Bond: How many of your fans do you think are interested in the Tibetan cause?

Thom Yorke: I don’t know. There’s something in the music about trying to validate yourself, and I hope through that they’ll see why we’re so interested in the Tibetan movement. I haven’t really gotten any feedback from them, but that’s why we’ve kept going on about it. Maybe it does some good or maybe it washes over people, but if it was me and I was getting newsletters talking about it, then I would probably try to find out more. That’s what U2 did for Amnesty International during the eighties, and it really worked.

Our generation for so long has genuinely believed it has no power at all. Have you seen that Pepsi advert where they are all going “aaaahhhhh youth!!”(thrusts his hand out as if holding soda can) and they get their kicks jumping off mountains or something? That’s the conclusion of something. I think we should move on from there. I don’t think young people are as demoralized as the media and government would like us to think. The obvious sign of that is how strong and how close personal connections are and how much people are able to build a life for themselves, despite all this stuff that’s been thrown at them.

Noam Chomsky has said that any member of society can change things simply by their consumer power. If nothing else at all, if you don’t write letters or anything else, if you don’t buy any of this stuff, the companies will freak out. It’s that easy.

The next day at the National Day for Tibet rally on the Capitol lawn, Thom Yorke closes out the speeches by singing “Street Spirit.” He shouts “Power for the people” and departs the stage. Sogyal Rinpoche takes the mike and leads the gathering in a few closing prayers, among them four lines from The Guide to the Bodhisattva’s Way of Life:

“For as long as space endures/ And for as long as living beings remain/ Until then may I abide/To dispel the misery of the world”;

And from the Four Immeasurables:

Judy Bond is a writer based in Baltimore.

Judy Bond is a writer based in Baltimore.