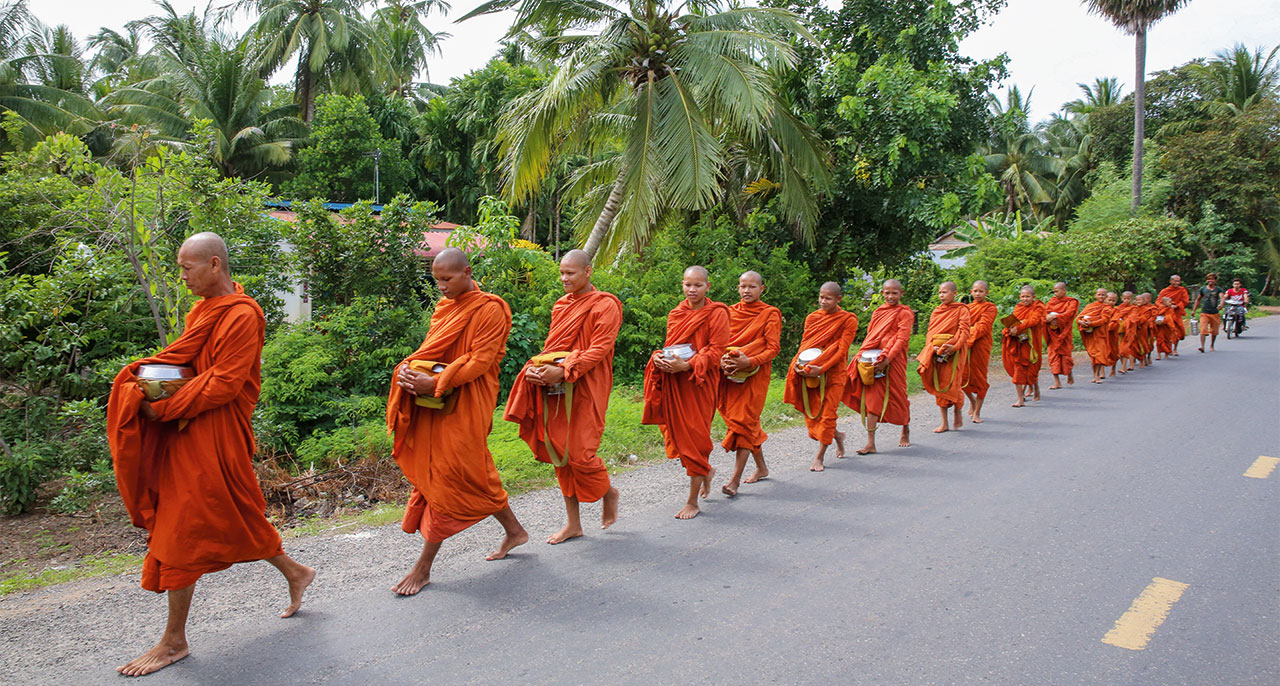 Monks on an alms round in Cambodia. Photo by Robert Harding / Alamy Stock Photo.

If you are a fully ordained Buddhist monk (bhikkhu) or nun (bhikkhuni), and you wish to know what kind of footwear is allowed, how to settle a community dispute, or how to conduct an ordination ceremony, the Vinaya is the place to look. In it, the Buddha describes disciplinary guidelines, rituals, and community norms for those who join his monastic order. The Vinaya prescribes behavioral guidelines ranging from the seemingly trivial (don’t make stupas out of your rice when you eat) to the extremely serious (don’t take a human life). The hundreds of rules monks and nuns must follow (and nuns have even more rules) are grouped according to their severity.

The section that may appear to us to carry the least moral weight covers monastic decorum, which advises monastics on behaviors such as properly wearing robes, walking, sitting, focusing the gaze, speaking, receiving alms, eating, urinating, and defecating. In fact, these rules are very important because they help monastic communities cultivate an image of dignity and harmony that encourages laypeoples’ support.

The Vinaya articulates social engagement and community norms and considers issues like settling conflicts, incorporating people with different backgrounds into a community, and preventing abuses of power.

The Vinaya is a historically layered tradition that continued to develop after the Buddha’s time, so there is not one monolithic Vinaya. The Vinaya of the Pali canon is associated with the Theravada tradition, but there are five other complete Buddhist monastic codes that are extant, each belonging to the canon of a different Buddhist school. While these various Vinaya texts share much in common, they differ in how they are organized, the number and content of the disciplinary rules, and how they explain the origins of rules. To complicate matters further, it is common for specific lineages or monasteries to have additional discipline and community traditions, which monks and nuns learn through oral instruction or by living in the community.

The relationship between canonical Vinayas and living communities can be particularly complicated for monastic women. In Tibetan communities, nuns cannot be formally ordained beyond the novice level. In South and Southeast Asia, even novice ordination is not officially permitted for women, though there are some exceptions. In Sri Lanka, women’s ordination has been reestablished despite resistance from male monastic higher-ups, and communities that include bhikkhunis now exist in Thailand. Additionally, women from Thailand, Burma, Nepal, and Sri Lanka can ordain as alternate female renunciates called maechee, guruma, thilashin, or dasa sil mata. 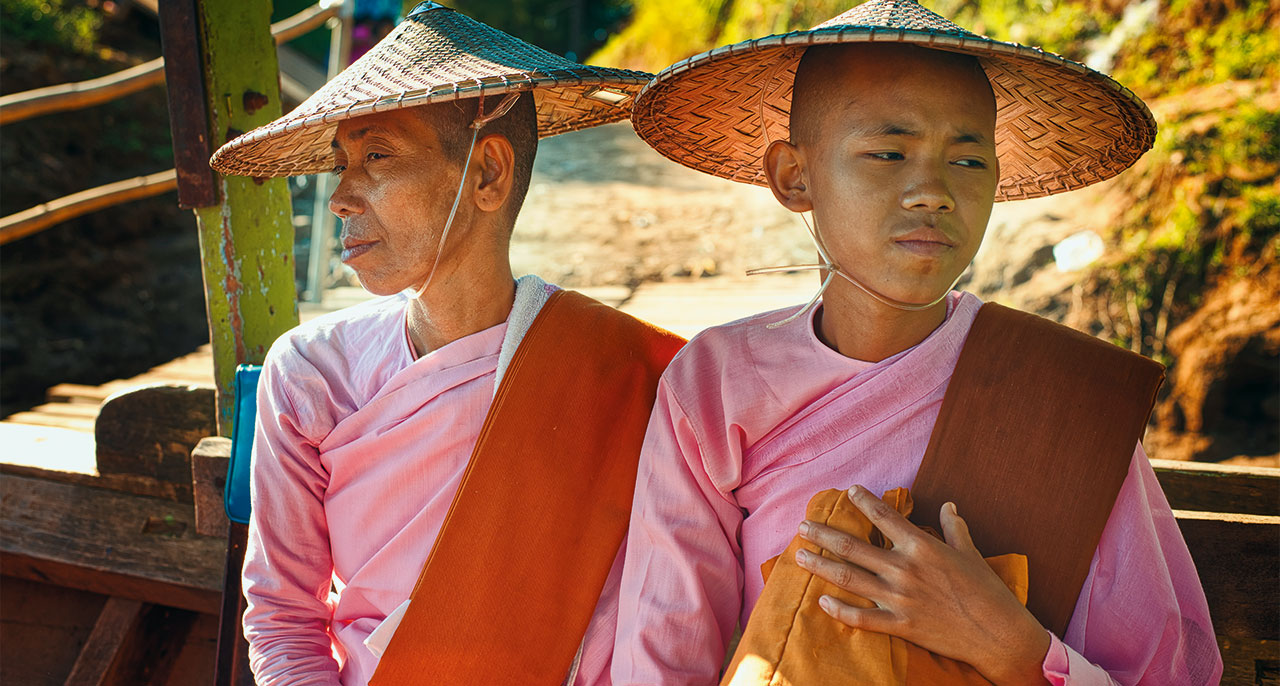 In most Therevada countries today, women are forbidden to fully ordain since the lineage of nuns has died out. Women can live as enunciates, but they’re not accorded the respect of monastics. Photo by iStock.com / nevskyphoto.

Buddhist renunciant women who are not bhikkhunis still shave their heads, wear robes, follow precepts, and perform monastic decorum, though technically they are not obligated to follow the full set of precepts. In Nepal, Thailand, and Bhutan, the Vinaya is not so much a complex legal text for many monastic women but an ideal that lends authority and credibility to their choice to focus on education or live unmarried and child-free in spiritual community with other women.

While the letter of Vinaya law does not apply to laypeople, traditional Buddhist discussions about what is ethical for laity are sometimes modeled on discussions in the Vinaya, such as the five lay precepts, which are a part of the ten novice precepts. The five additional precepts for novices prohibit actions like eating after noon and indulging in entertainment. In practice though, many child or adolescent novices are less strict in their discipline. Whereas devout laypeople will follow the additional precepts during full moon days or on retreat, young monastics rarely follow all ten, and may regularly play sports or watch movies, and are often encouraged to eat an evening meal.

Relatively few Buddhists in North America are ordained monastics. Most convert lay practitioners prioritize learning meditation and doctrine, and do not typically spend much time reading the Vinaya. Perhaps they should! These traditions are a treasure trove of Buddhist stories addressing day-to-day ethical dilemmas, community tensions, and all manner of human foibles. Those seeking Buddhist responses to complex questions of racial justice, gender-based violence, and the climate crisis may find the Vinaya a useful, socially engaged source for Buddhist ethical thought and practice.

The Vinaya is an authoritative tradition originating during the earliest days of the Buddhist community. It articulates social engagement and community norms and considers issues like settling conflicts, incorporating people with different backgrounds into a community, and preventing abuses of power. Those who may dismiss Buddhist communities’ current discussions of equity, sexual ethics, or misuse of power as not “truly” Buddhism should read the Vinaya to learn otherwise.

Dr. Amy Paris Langenberg is an associate professor of religious studies at Eckerd College and the author of Birth in Buddhism: The Suffering Fetus and Female Freedom (Routledge).