A mysterious beast captures your attention. Is it distracting you or calling you? It can be hard to tell, says Zen teacher John Tarrant, what’s distraction and what could have real meaning for your life. Either way, there’s no going back. 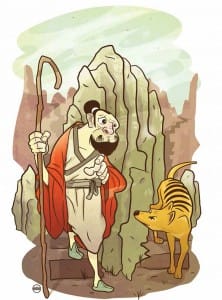 When people ask about distraction, I suppose they mean something like my life: I am leaving the house but I can’t find my truck keys. By the time I find them, mysteriously, my phone has gone missing. While I’m looking for the phone, it rings—it’s my friend, also my board president. Then the sheep make a hullabaloo about something so I walk down to the paddock, but it is just a kind of sheep party with baaing, while the border collie cheers from the sidelines. I feed the sheep alfalfa, come in, and sit down to write.

Then emails—a friend has cancer, someone wants a bio, a friend who’s a physicist has cool things to say about koans, my daughter opens a Google hangout from Tokyo and wants to talk about Jane Austen and also new uses of Ngram Viewer. I open Ngram Viewer, which gives the frequency of a word’s use over time, and it turns out that the words “distraction” and “distracted” were most used in Jane Austen’s time but are on the rise again.

And wait, here’s a link to a piece that claims that the thylacine, the Tasmanian marsupial tiger, which is a sort of totem of mine, isn’t actually extinct. With so much going on, it seems that I don’t need to leave the house after all.

Nothing is wrong with any of those chunks of experience. The question is whether I can have enough space and silence inside them to take them in and claim them as my life. Distraction can have a long arc, and until the end of the story, you can’t say what’s a distraction and what’s a calling.

Sometimes We’re Not Doing It Wrong

By distraction people usually mean that they were doing something and then switched to doing something else. Everyone’s mind does this a lot; fetching around is a consequence of evolution. We like to discover things and change our minds about the evidence; it’s why detective shows are popular. If my mind switches thoughts on me and I find the new state painful, or if I get fired for being on Facebook instead of the teleconference I had agreed to be on, I might think I’ve been distracted. If my thoughts jump about like puppies that want a walk, I might call my new state “madness,” which is a venerable meaning for “distraction.” Shakespeare uses it that way with regard to Hamlet. Telling myself I’m distracted is a way of yanking on the leash and struggling to get back to equilibrium.

The idea of distraction implies that there is a baseline way of experiencing the world, which we find familiar if often uncomfortable. We think we ought to avoid distraction since it takes us away from our baseline. But the opposite is equally likely—distraction might be an opening, it might be helpful information.

If my new state of mind is exciting, I might call it a discovery. I could be on the trail of what I love, in which case I would be destroying my equilibrium in a positive sense. Sometimes we are not doing it wrong.

Since all moments have their virtue, there’s not a wrong moment to have. Let’s say I’m sitting in the night, meditating, and suddenly I notice the voices of frogs: ribbit, ribbit in American, croar, croar in Spanish. The sounds open in me such a sense of delight and spaciousness that I am lost. I could listen forever.

So in meditation I don’t think, “Wait, what was I supposed to be doing with my mind before these creatures hopped in? There’s something I need to get back to.” I forget who I am and trust that somehow I am being carried and all the time it’s fine and whatever I need to do next will appear when its time arrives.

That’s one sense of “Abiding nowhere, the heart comes forth.” Things step forward to meet me and I think, “Yes, this is what I came here for.” It might be something simple—a sound or a child running to the door. I’m not wondering whether this moment is good or bad; it’s beyond all that. Inside each shard of time is a glow everlasting. Getting lost and distracted in this way is what life is for.

Nostalgia for Imaginary States of Mind

I notice I make stuff up about what my mind was like before I was distracted, when actually it was about as distracted as it is now. I can’t find a baseline to return to. I don’t really need somewhere to stand outside of where I am. Which is lucky because there isn’t such a place. Not knowing where I am is intrinsic to creativity and innovation.

Distraction started early in my life, when I would wander up the road to get kindling and come back two hours later with arms full of sticks and memories of strange trees. When I first went on meditation retreat we were told, “Don’t look at the mountains. Don’t look at each other.” It was a kind of fasting of the eyes, but it seemed in other ways to be building a prison rather than breaking out of one. I had learned to sit looking out over wild valleys and mountains, watching the world be itself, and learning to bear being myself. This spring I like watching the narcissus push up out of the frost, the golden winter lemons that seem to lodge in my heart, the finches like jeweled, excitable tears. Watching things can also be meditation.

Someone in a recent retreat had a kind of dream vision. She was a very experienced meditator but as a person seemed inaccessible, as if wherever she went, she was balancing something that might spill. In her vision, she was meditating inside a large paper bag and had cut out a round hole, making a window. She had a view out of the hole. But then she reached out, picked up the round piece of paper, and began to sew it back in place. It’s an endearing dream, since it gives her an image for what she’s doing in her life and shows that the barrier around her is paper thin. Noticing seems like a move toward freedom.

A Distraction Is a Gate

Long ago and far from here, a pilgrim was traveling in the hills. His thoughts were like clouds and dreams. He forgot to think, since there wasn’t anyone to think. He became lost in his walking.

He rounded a bend, and on the opposite wall of the canyon there was a peach tree in blossom. The blossoms were white with crimson in the center. No veil separated him from them, and suddenly the peach blossoms were him. The tree, the river, the birds, the sunlight, the morning cold—everything was peach blossoms. He laughed out loud. His name was Lingyun, and he wrote:

For thirty years I searched for a master swordsman.
How many times did the leaves fall,
and the branches burst into bud?
But from the moment I saw the peach blossoms,
I’ve had no doubts.

It can be a shock—the heart coming forth. Anything, anything that we meet, is a peach blossom. An email about cancer, a phone call, the winter moonrise. When we truly meet any part of the universe, we recognize it. It feels like I’m seeing my own face. The things I thought I needed to be happy, I don’t need. I don’t need the perfectly respectable life that everyone wants. Mainly I don’t need to know what happens next. My own life is an unknown path through peach blossoms.

Centuries later, another poet across the sea, in Japan, wrote touchingly:
The village peach trees
were not aware of their own crimson
but still they freed Lingyun
from all his doubts.

Meditation, particularly koan meditation, distracts you until, barely noticing how, you start to accept the strange magic of your life. It’s beyond effort or concentration. There’s no separation between you and what you’re paying attention to. You do what you love, and the simplicity of what’s here and now is called enlightenment.

A Few Things to Enjoy About Distractions

Abiding Nowhere, the Heart Comes Forth

Oh and as I was saying before I was distracted…about thylacines. In Mole Creek, in Tasmania, there was an ordinary old-fashioned pub with a dark-wood interior, like something out of Tolkien. (It’s still there but I hear it’s fancier now.) It served farmers and wildlife people with weathered hands and creaky knees, smoking in the corners. Inside the pub were posters, letters, and clippings about the thylacine, and it was clear that the place was devoted to the notion that the thylacine still exists in some dimension of the universe—as a mythical beast like, say, a griffin. On the walls I read of a theory that our holding the thylacine in reverie is itself a kind of existence for it. I found the notion encouraging.

This marvelous perhaps-not-quite-extinct creature touches on the nature of things—that we don’t have to know where our mind is, or where it belongs. It belongs in the universe; it is universe. Every time we are distracted, we are falling into the Earth and the stars. The world catches us each time.

No matter how many losses we have, the world doesn’t forget to be itself. There’s not a world to go back to before it became the way it is, before the climate changed or the catastrophe happened. We can’t go back to a time before, but we can accompany each other; we can show up for what is here. Abiding nowhere sides with the involuntary, the gift of the world, the heart that appears in every moment. As I write this, the hills are brown with drought, the gray whales are migrating around the Point Reyes Light, and a few apricot blossoms are struggling out into frosty air. Just to breathe, to walk about, to see fog over the coastal range is a joy that cannot be numbered or managed or lost. Abiding nowhere, the heart comes forth.