After his stroke, Thich Nhat Hanh began enjoying a quiet, contemplative life in the temple where he lived as a young novice. Sister Annabel Laity shares the moving experience of visiting her teacher there. 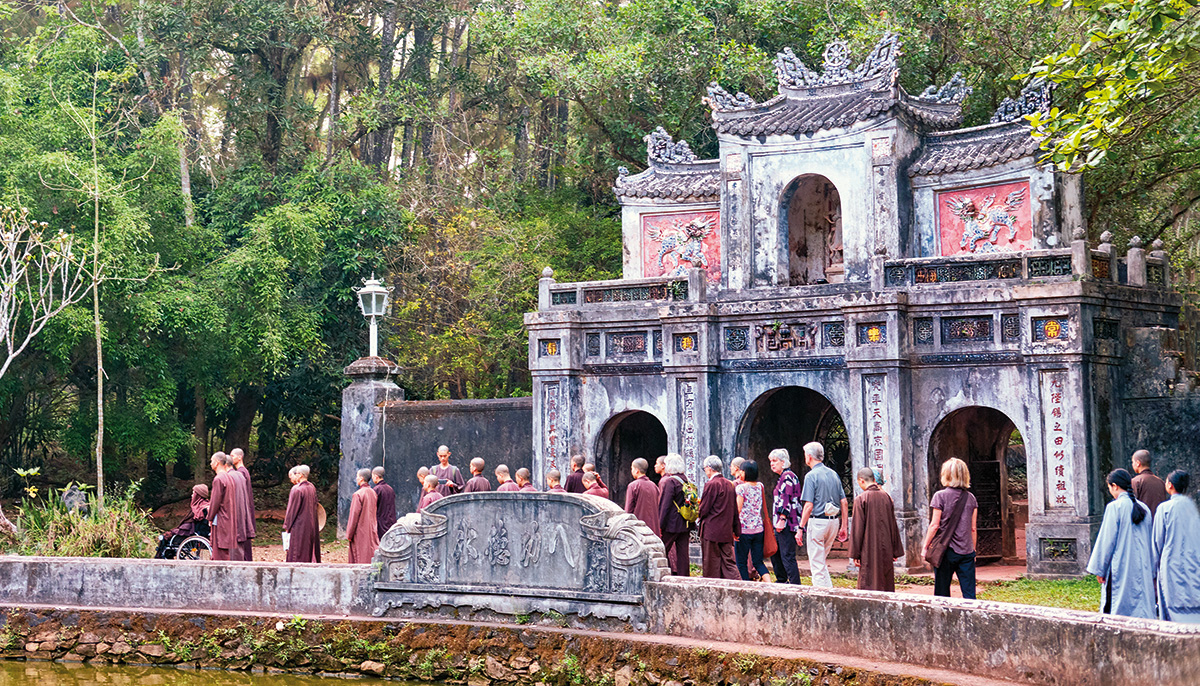 The presence of Thich Nhat Hanh brings a certain sense of peace to Tu Hieu temple in central Vietnam. The gardens are more carefully tended. People smile to each other more, and the temple buildings have undergone some essential renovations, which preserve the architectural style of the nineteenth century.

You never know when Thich Nhat Hanh in his wheelchair, accompanied by some attendants, will emerge from his quarters for a leisurely stroll in the garden. The garden lay-out has not changed much since he was a sixteen-year-old novice here, and as you follow him around the grounds on a meditative stroll, he will point out spots he remembers from his novicehood.

My teacher Thich Nhat Hanh, affectionately known as Thay, is doing better than any of his doctors expected. You could say he’s had a miraculous recovery. No one expected that his body would reabsorb the blood from his 2014 brain hemorrhage. Daily, he faces the challenges and the physical pain of a stroke victim, but his power of endurance is great.

In our tradition, the Plum Village tradition, we have nine monastic practice centers. In November 2014, when I first heard about Thay’s stroke, I was in our monastery in Thailand. An emergency meeting was called for Plum Village dharma teachers from all over the world. How could we best organize our practice to support Thay’s healing? The doctors in France were not very optimistic, and they led us to believe that there was little chance of recovery for Thay. So we also needed to discuss how we should organize the obsequies in the event of Thay’s entry into parinirvana (nirvana after death).

I was near to tears after that meeting. I went out onto the balcony of the monastery and heard the birds singing as if they had not a care in the world. I asked them: “Dear birds, how can you be so joyful when I am so sad?” and they seemed to say to me that Thay was going to continue to manifest in this body for much longer, maybe for ten years or even more. Since then, I have harbored hopes that Thay will speak again and maybe even walk again.

In late 2016, Thay signaled to his disciples that he wished to leave France to go to our large monastery in Thailand. It is the home of so many very young monks and nuns that we call it “the nursery garden.” Many of the youngest ones had never seen Thay in person. When he went there, what a joy it was for them to sit with Thay, cook for him, and attend to him. Lay friends from Vietnam also went to Thailand in large numbers to see Thay.

In the autumn of 2017, I returned to Thailand and visited Thay in his hut there. Thay can use his left arm and with it he can give you a strong hug or touch your head or forehead in blessing. I was happy to feel Thay’s physical presence, and we cried together. Thay still recognized me and knew my mind, although there could be no communication in words. Thay held me close to him for some time and, on my departure for Germany, he laid his hand on my forehead. I knew Thay was in pain with severe headaches as a result of his paralysis, and I was moved by his compassion and generosity in seeing me.

The following year, Thay let his disciples know that he wished to go to our tradition’s root temple, the Tu Hieu temple in Hue, Vietnam. Some media outlets were misinformed and claimed that Thay wanted to return to his root temple, the place where he had spent the happiest days of his life as a novice, in order to end his days there very soon. It is true that Thay did indicate he wished to stay in the root temple until the end of his life, but the assumption that he was soon to pass away was incorrect. The Eastern doctors who are now treating Thay say that the life force in him is still strong, and we have no reason to think that his passing into parinirvana is imminent.

When Thay’s decision to return to Vietnam was announced, I was in Plum Village France for our annual autumn rains retreat. Because many were still afraid that Thay would soon leave us, another dharma teacher meeting was called to go over what we had discussed four years earlier. This time I remembered what the birds in Thailand had told me, but I still went ahead to help organize what we’d do when Thay’s parinirvana came. Many senior monks and nuns from Europe and the U.S. were making plans to visit Thay in Vietnam, and I was advised to do the same. So, I too went to Vietnam. 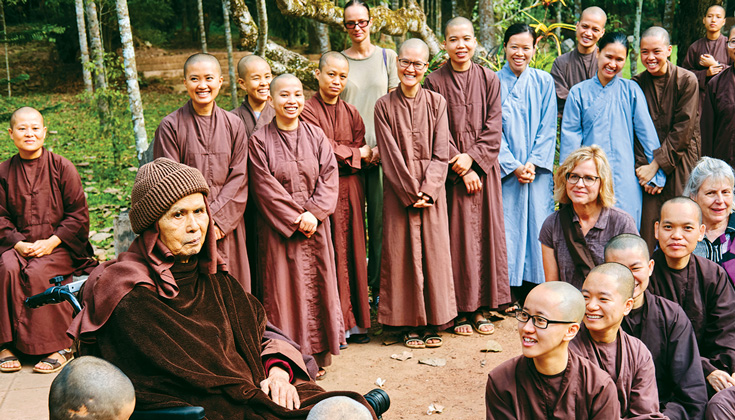 Thich Nhat Hanh suffered a stroke in 2014. His students report that he has turned the resulting physical challenges into a powerful teaching by continuing to live joyfully. Photo by Paul Davis.

Thay has had his own hut on the grounds of Tu Hieu for many years now and he has settled into that place. In Tu Hieu, there are monks who are disciples of Thay and there are also monks who are not practicing in the Plum Village tradition. The presence of Thay helps them all to live in harmony. Thay does not discriminate between them or ask, “Who is my disciple and who is not?” Thay only wants Vietnam to have effective dharma doors that can help his fellow countrypeople suffer less.

Many people come from all over the world to have a glimpse of Thay, but that isn’t always possible. Sometimes the weather in Hue is too humid or too cold, and Thay needs to go to the other side of the mountain range near Da Nang in order to enjoy a more clement climate. Thus it happens that people who come to see Thay can be disappointed. Thay still is and always has been shy, and sometimes chooses to avoid large crowds.
Indeed it is a gift to see him. The light in his eyes still shines brightly as he looks at his disciples or at the scenery. You really feel that Thay is there in the present moment.

It is a delight for his monastic disciples to be able to eat with Thay. Before his stroke, Thay always liked to sit at the table with a number of monks and nuns. He would spend most of the meal distributing to us the dishes his attendants had made for him, and he always put far more food into the bowls of others than he put into his own. After his stroke, when eventually he was again able to eat mostly on his own, Thay resumed distributing food to his disciples sitting near him. I was moved watching Thay eat with the help of his attendant in Plum Village’s Lower Hamlet in 2016, not long after his stroke. It wasn’t easy for him to put the food into his mouth, yet rather than being lost in feelings of frustration or shame, he was completely there as the food spilled down his front, and you could see that he was practicing mindfulness of eating as he chewed with full enjoyment.

Thay’s presence still graces ceremonies at Tu Hieu temple. Although we don’t always know whether he’ll be able to attend or not, we always practice as if Thay were there. Once in Plum Village in 2016, not long after his stroke, we were conducting a lamp transmission ceremony to ordain new teachers. Thay came into the hall just as I was about to transmit the lamp to a younger sister, and although he was on the other side of the dharma hall, I straightened my back and sat up very tall just as if he were directing me.

When I visited Thay in Hue, I saw him as the continuation of the Dhyana master Nhat Dinh (1783–1847), the founder of the Tu Hieu lineage. Toward the end of his life, this master asked the king for permission to retire from public life. Nhat Dinh had tirelessly served the sangha and had been the spiritual advisor to the royal family. He then built himself a small hermitage on the site where Thay is staying now in order to take care of his mother and to enjoy the great freedom of a realized monk. Thay, too, has retired from public life, and although he has to endure many physical discomforts, he still has the happiness of a monk’s freedom.

I am currently staying on the grounds of Thay’s former hermitage in southwestern France. This place enjoyed Thay’s presence for more than thirty years until he left it in 2016. But Thay has not really left. His mindful steps have entered the paths. His mindful breath has become the wind that blows in the poplar trees. His peace and joy have grown into the bamboo grove that he planted. The same is true of the Tu Hieu temple in Hue. Thay’s presence there will leave its energy of understanding and compassion for many years to come, and we will feel it in every leaf, every stone.

See the latest updates on Thich Nhat Hanh on the Plum Village website.

Sister Annabel Laity was the first Western woman to be ordained as a nun by Thich Nhat Hanh. She is the author of True Virtue: The Journey of an English Buddhist Nun.