You may have seen Leanora McLellan’s story “The Most Valuable Cups in the World,” in our March magazine,  which you can read here. We’re pleased to present another one of her Zen stories, “Time to Die.” 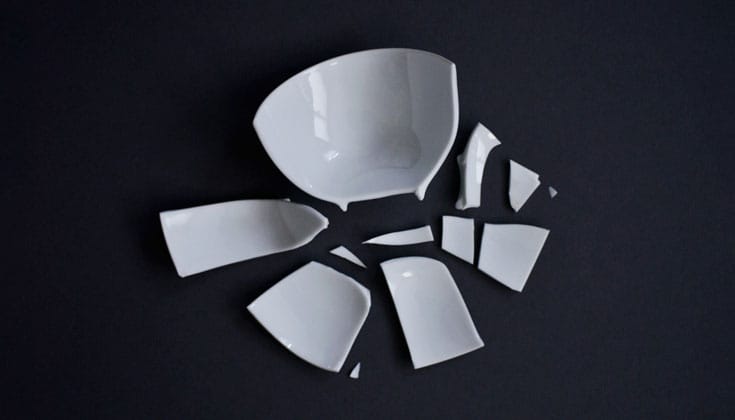 Ikkyu, the Zen master, was very clever even as a boy. His teacher had a precious teacup, a rare antique. Ikkyu happened to break this cup and was greatly perplexed. Hearing the footsteps of his teacher, he held the pieces of the cup behind him. When the master appeared, Ikkyu asked: “Why do people have to die?”

“This is natural,” explained the older man. “Everything has to die and has just so long to live.”

Ikkyu, producing the shattered cup, added: “It was time for your cup to die.”

It’s heavy, but I can pick it up and move it on my own. It’s hard, but it can bend around corners and through narrow doorways. If I need it to, it can fold in two. There is a dip in the middle that follows the curve of my spine. Every night I find the place where my backside fits into the dip and I fall asleep.

“Are you going to keep this bed?” Olivia asked. Her tone implied that I should not.

“What, my dog mat?” I said laughing. We often joked that my bed was more like an oversized dog bed than a mattress meant for a human. Not even oversized, necessarily. Just a mat intended for a large-breed dog. Like a Saint Bernard. Or a Bull Mastiff.

“Well, yeah. I don’t know. I like it,” I said. I had moved into a new apartment. I had started a new life. It hadn’t occurred to me to get a new bed.

“What do you like about it?” she asked. We were lying next to one another staring up at the ceiling. Our backs lay flat on the bed and our feet were planted on the floor. Our knees were bent, our hands folded on our chests.

“Yeah, sure. I like everything about it,” I said. “It’s comfortable.”

I also like how the bed fits in my car. How it slides perfectly over the collapsed back seats. Most people have to hire a truck to move their beds, or they abandon their beds and get a new one every time they relocate. Mine moves with me.

It’s possible that I have grown a kind of attachment to it.

Yesterday I was walking home from work and I saw a piece of paper tacked to a streetlamp. It read: “LOST: necklace” It had a description of the necklace and a photograph of a tiny silver pendant on a delicate silver chain. At the bottom it had an email address one should contact if the necklace was found. It was a special email made for the occasion. [email protected] Something like that.

It made me sad. Not because someone lost their necklace. That kind of thing happens all the time. I once lost a necklace that had belonged to my Grandmother. The clasp was old. Another time, I lost an earring the first time I wore the pair. My Dad had given them to me as Christmas gift. No one likes to lose a Grandmother’s necklace or a Dad earring. But, that’s the nature of earrings and necklaces, I think. They get lost. The truth is, nothing lasts forever. All people must know this on some level. It doesn’t stop them from trying to make things last forever. It doesn’t stop them from getting upset over lost necklaces and spending their afternoons making flyers.

People don’t last forever either. I don’t mean to offend anyone by comparing losing an uncle or a best friend to losing a diamond ring in the ocean. I know that diamond rings and uncles aren’t the same thing, but I do think the same logic can apply if you can get past the initial discomfort of comparing the two.

There used to be a boy who slept in that little bed with me. A man, I guess. When we first met, he asked me how old I was. I answered his question, but I didn’t ask him back and so I never found out. I knew he was older than me—somewhere close to thirty years old, I’d bet. Thirty-year-old people aren’t usually boys.

He was almost seven feet tall and too big for the bed. His legs hung off the bottom and his arms hung off the sides. But he didn’t seem to mind. And at the time, it seemed like we both fit pretty well. I remember hoping that he wouldn’t notice how the bed sank in the middle. How the subtle dip matched the curve of my spine.

“Tell me something,” I said to him. It was 4 am and I was fighting to stay awake.

It felt important to stay awake.

“What do you want me to tell you?” he said. I wanted him to tell me what his older sister was like. His childhood pet’s name. The first time he realized that his dad wasn’t perfect. But it was too soon. You can’t say that kind of thing. At least, you aren’t supposed to.

So I shrugged and said, “Tell me anything.”

He told me about the Northern Lights. How charged electrons from the wind interact with the nitrogen and oxygen in the air. How the magnetic and electric forces mix in this special way that streaks the sky with greens, blues, and reds. He was still talking when I drifted off to sleep with my cheek on his chest.

He slept in my bed a few more times after that. Then he stopped. I have a strong feeling that I won’t ever see him again. I think [email protected] has better odds of finding her lost jewelry on the city streets. Sometimes I wonder if my attachment to that dog mat bed has something to do with the man-boy who slept in it. If that is true, maybe I should get a new one after all.

Anyway, the flyer made me sad because the person who lost the necklace didn’t seem to get it. I am tempted to email this person and say something like, “Hey, you’re never going to find that necklace. Move on.”

What is it that phrase people like to say?

If you love something, let it go. If it doesn’t come back, it was never truly yours. I don’t know whether or not I loved him, but I always knew that he wasn’t mine. It’s funny how things can still surprise you even when you know that they are going to happen.

As writers, we aren’t supposed to use clichés. The conventional wisdom on the subject is that these readymade phrases have been used so frequently over such long periods of time that they fail to convey any meaning anymore. Clichés are trite. Unoriginal. But I have to wonder if this is really true. I’d like to know what is so original about finding a different way to say the same thing over and over and over again.

And besides, doesn’t everybody know?

You can’t cry over spilled milk.

Introduced to Buddhism as a student at the University of Vermont, Leanora McLellan has noted a shift in her interest, from the purely academic to the deeply personal. She was especially pleased to complete her first silent meditation retreat in 2012. More recently, Buddhism’s influence has found its way into the creative nonfiction writing McLellan has undertaken as a master of fine arts student at Emerson College. She works in Boston as a writer and yoga teacher.