Guo Cheen on why now, more than ever, is the time to dive in to Buddhist practice. 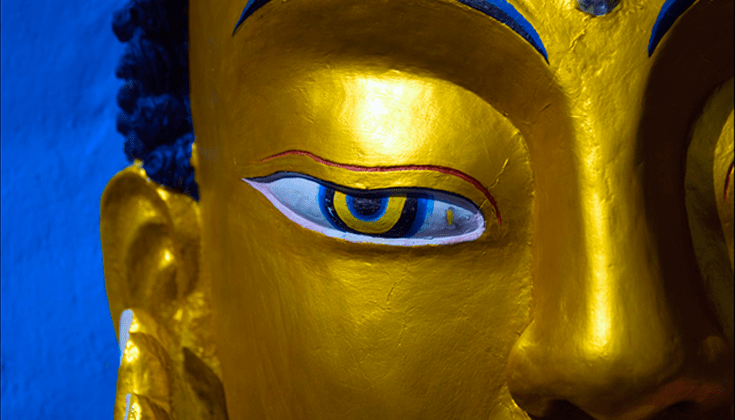 There’s a heaven on earth that glows, sometimes, in my heart: a paradise where enlightened beings are in perpetual peace and joy, radiant from their deep states of meditative absorption and genuine kind regard toward all. There is no strife or judgment, no war, no prejudice.

I long for the peace and joy of that place, as most meditators who have had glimpses of it would. Fleeting as those glimpses may be, something grows from them: a wish to ease the pain and disagreeability of this world to whatever degree I can.

I know that human beings may never be wholly free from all prejudices, but there are times in history when our intolerance must be named and confronted.

I’m saddened to have to bear witness to repeated patterns of powerful men degrading, manhandling, and victimizing women without shame, apology, or consequence.

I’m disturbed by the deep-seated racial prejudice (often stacked on top of white privilege) — still irrepressible despite the successes of the civil rights movement, still manifesting and being used for gain and influence. Then, too, there are the continued silencing and ill treatment of the disadvantaged by those in power.

I would rather not talk about race and gender. Discomfort arises when discrimination is observed. Discomfort is also present when we decide that it must be addressed and acted upon with education or vigilant action.

I hear some people argue that, it being 2017, equality has finally taken root, so any seemingly prejudicial actions or comments are coming from a mentality that’s beyond or “post-” racial, ethnic, religious, or gender biases. But as an Asian American female in Buddhist monastic robes, I can tell you: I’ve been pricked by the thorns of prejudice. In Buddhist circles or otherwise, for instance, someone like me is often regarded as foreign and submissive; I must repeat my views or articulate them more strongly or artfully before I am acknowledged.

Has the America that I, an immigrant who felt so welcomed by the U.S. at age ten, know changed so drastically? It seems that way. But what can be done about it?

We’re all disconnected in one way or another. There’s proof of that everywhere. Look at the outcries we’ve been seeing in the media and social media, and at the protests and marches, versus what the election-related surveys and polls seem to tell us. Look at the number of women who rallied for a female presidential candidate and who demonstrated in the peaceful Women’s Marches, versus the 53% white women who voted for the current president (New York Times, 2016). Look at all the people and companies engaged in actions on behalf of the “Muslim ban,” versus polls that show a slight majority of Americans who wish to see a ban of Muslim refugees (USA Today, 2017). Has the America that I, an immigrant who felt so welcomed by the U.S. at age ten, know changed so drastically? It seems that way. But what can be done about it?

One thing we can all do is to turn down the noise outside, sensationalized news can be a stimulant that’s weaned until demand diminishes. In meditation, for instance, we can spend more time watching the programming inside: What are my values and needs as an American, and at my true core simply as a human? By gently paying attention to the space between and beyond the words and emotions that surface, we cultivate a patience and awareness that help free us from habitual patterns or unhelpful reaction like stereotyping or engaging in shouting matches or insults. Tapping our awareness helps us be open to being with others, and to be with ourselves, even – even when we don’t necessarily like what we see. It tunes us into the truth of our interconnectivity.

So I advocate Buddhist practice as a way to get ready for our years ahead working to preserve America as a land of immigrants and equal opportunity. After all, if we’re not willing to take steps toward and with each other, we’ll never find common ground — much less heaven on earth.

Guo Cheen is a founder of North American Buddhist Alliance and The Compassion Network. She is one of many trying to connect Buddhists across North America, including through a series of female teachers webinars on Gender and Race in a New Era.