Elissa Altman shares the story of “Grandma’s Ghost,” a 30-year-old Japanese umeboshi plum, and the healing it brought in this difficult time. 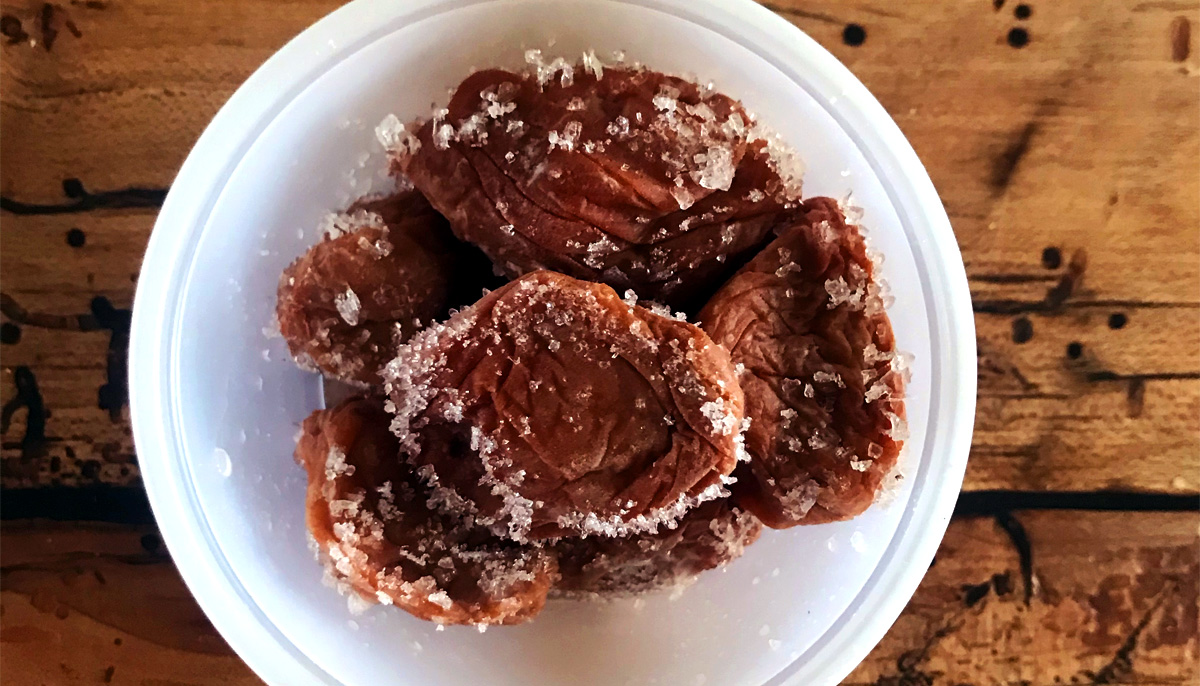 Umeboshi. Photo by the author.

We have not seen each other in forty years, but when the package arrived from my childhood friend, Maki, who had found me on Facebook, I had a sense of what it might be: salty, briny, pickled, wrinkled, fragrant Japanese plums, called umeboshi, which her family in Japan grew on their farm. She had recently sent her husband, Brian, over from New York to help with the harvest, and to learn the ancient process of making them, which has, in most parts of the country, been lost to industrialization and a veering away from tradition.

It was a gift from another time, an edible family heirloom.

I had been unwell, unsteady, undone by a series of stressors both internal and external that left me in a constant state of illness.

You need umeboshi, Maki said to me in an email. Slivered, added to some steamed rice. Then reserve the pit and let it steep in hot water and drink it as a tea. And it will settle you.

How long will they last? I asked.

Forever, she said. Unless you eat them.

I opened the package and found three small canisters, each labeled in black Sharpie pen: her aunt’s three-year umeboshi, Brian’s five-year, and — packed into a repurposed Oil of Olay jar — 30-year old umeboshi, which was marked Grandma’s Ghost. Unearthed on the family farm as part of a stash preserved by her grandmother who had died 30 years earlier, it was treasure, made by her hand in the traditional manner before the invention of the smart phone or the laptop. I was not certain that I could possibly ever eat it. It was a gift from another time, an edible family heirloom, a direct connection to the past.

And when it was gone, it would be gone forever. 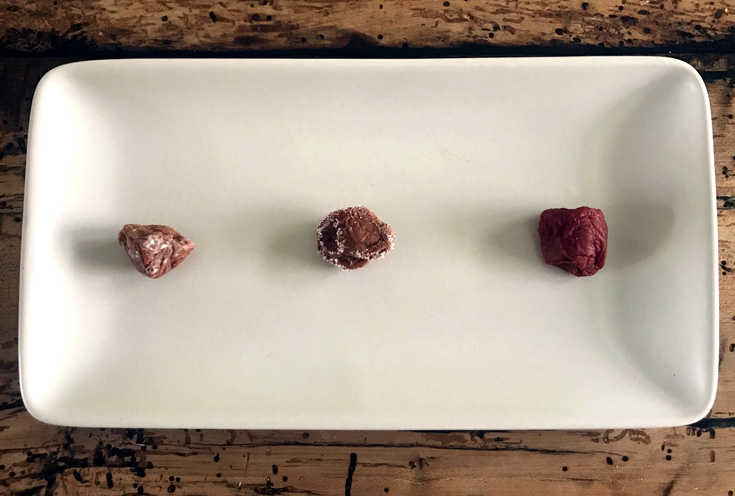 From left to right, 30-year, five-year, and three-year umeboshi. Photo by the author.

Harvested during the summer months while green and firm, packed in sea salt (sometimes with red shiso leaves, which grow at the base of the plum trees and are used to help the umeboshi attain its typical ruby color) and left to brine until dried and wrinkled, umeboshi — Japanese plum that is closer in genus to an apricot — is a culinary exercise in what Norman Fischer calls “the false notion of permanence.” Nothing is static; nothing stays in one form. This is the law of pickling and preserving and drying: a sweet cucumber becomes a spicy gherkin, a grape becomes a raisin, bland cabbage becomes incendiary kimchee. And a simple Japanese plum, immersed in brine and then packed in salt, becomes an eye-wateringly tart curative; what is smooth and firm wrinkles with age, its flavor and healing properties concentrating with every passing day.

It was a year before I allowed myself to taste Maki’s late grandmother’s Ghost Umeboshi; the coronavirus had quarantined me in my home, together with my wife and my elderly mother. Nerves were frayed, privacy non-existent. One quiet afternoon, I steamed a pot of rice using my small clay donabe — a slow, primal method — and sliced the treasured fruit into the hot grains, setting aside the pit for tea. But before I did, I held the fading red plum in my hand, furrowed as an ancient face, and considered Maki’s grandmother on her farm near Kyoto in Fukui prefecture, having lived through periods of peace and war, illness and joy, and I silently thanked her for the gift.

Elissa Altman is the author of, most recently, Motherland: A Memoir of Love, Loathing, and Longing; Treyf: My Life as an Unorthodox Outlaw; and Poor Man’s Feast: A Love Story of Comfort, Desire, and the Art of Simple Cooking, and won a James Beard Award for the narrative blog of the same name. When she is not writing or cooking, she practices Insight Meditation from her home in New England. You can find more about her at ElissaAltman.com