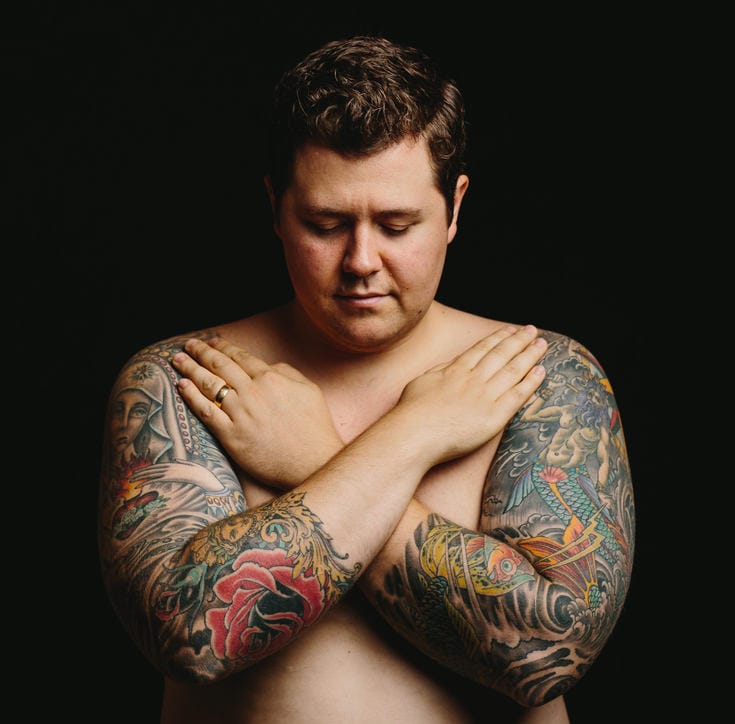 Chris Coles' photo from the cover of his memoir, "The Body of Chris."

Chris Cole’s first psychotic break was a religious experience. Many years later, he learned that recovery meant understanding his bipolar disorder medically as well as spiritually.

I was an eighteen-year-old freshman, one month into a summer semester at the University of Georgia. I wanted to get to school early, mostly because I was sick of getting grounded for my drinking. For years I had told myself that I would drink more moderately if my parents weren’t so strict. But after a month of independence, the truth of my budding alcoholism was obvious.

I’d been feeling depressed. But, walking home after partying until sunrise, I suddenly felt an extraordinary bliss overtake my being. My movement felt light and effortless. The summer sun engulfed me like a warm bath. I noticed how alive everything looked—the flowers, the grass, the air through the trees. I could feel the earth breathing. If there was ever an experience of unmitigated oneness, this was it.

Had I somehow stumbled into Nirvana? Even my own name seemed foreign when a friend called out to me. This life is not real, I thought. I am not real. This is what God must feel like. I must be Jesus!

In the police car, my episode escalated. I imagined these police were Pharisees, taking me to my crucifixion.

It turned out my initial spiritual awakening was also my first psychotic episode. After it occurred to me that I was Jesus, my mind flooded with biblical imagery. I searched for my friends, assuming they would be my first disciples. When they encouraged me to sit down and relax, I leaped up, punched one of them in the face, and called him the devil, before fleeing my dorm room.

By the time I got to the lobby and had started preaching about heaven on earth, the campus police arrived and took me to jail. In the police car, my episode escalated. I imagined these police were Pharisees, taking me to my crucifixion. In my cell, I stripped off all my clothes and demanded the officers come look at my naked body and see that I was neither male nor female, that I was God. When they finally administered a sedative, I was sure it was a lethal injection.

My parents drove up from Atlanta to bail me out that evening. After a number of days of monitoring, I was brought to a psychiatric hospital, diagnosed and treated for bipolar disorder—a chronic illness that includes alternating depression and mania, with the possibility of psychosis in extreme states. Even after my sanity returned, I couldn’t shake the spiritual nature of my experiences.

I now felt like I knew God for the first time in my life, not as the deity I’d grown up worshiping, but as an ineffable experience of unity and transcendence. What was God but the experience of selflessness? For me, God was no longer someone to believe in, but something to know. This experience left me feeling more like an atheist than the devout Christian I once was. How is it that I could have a spiritual awakening and no longer feel religious?

When I enrolled at Naropa University, the Buddhist-inspired liberal arts college in Boulder, Colorado, I found some language to address my spiritual and psychological experiences. Naropa’s founder, Chögyam Trungpa Rinpoche, taught about the connection between wisdom and neurosis. His teachings on “crazy wisdom” fueled me in my efforts to learn what could have produced such profound states of confusion and what clarity might emerge as the result of deeper exploration. Buddhist ideas of basic goodness and buddhanature helped me to understand that even in states of madness, sanity can be present. Once I began exploring the wisdom aspect of neurosis, some logic emerged amid the chaos. Childhood trauma, feelings of unrequited love, shame around my sexuality, inadequacy, perfectionism, grief, existential angst, doubts about my faith—these had manifested as maladaptive behaviors, cognitive distortions, and mood dysregulation.

For many years, I preferred spiritual explanation to psychological theory, which created unnecessary suffering. I was drawn to the possibility of enlightenment and disturbed by the idea of mental illness. In my mind, I was stuck in a cycle of attraction and aversion: I had to be brilliant or mad, sane or crazy, wise or confused. Trapped by dichotomous thinking, I was unable to accept treatment and progress toward a life of stability. Buddhist psychology, though, inspired me to discover a middle way.

I can have bipolar disorder and still be fundamentally sane. Though recovery requires formidable challenges, acceptance, and healing, I am on a path toward truth. I can keep my spiritual insights and pursue recovery, and there is space for it all. My middle way is a total embrace of my humanity, with the promise of joy and sorrow, grounded in the sincere desire to love without condition.

Today I lead a life of general stability and happiness. There are good days and bad, but every single one is precious. Of course there are times I wish I didn’t have bipolar disorder; yet, I could never separate my illness from the rest of my life. There is a depth to my life and a call to serve that I did not know before. Bipolar disorder is my spiritual path. It is my constant invitation to come back to center, to come back to my heart. We all have our own difficulties, our own particular flavor of suffering that calls us to awaken. Bipolar disorder just happens to be mine.

Chris Cole is the author of The Body of Chris: A Memoir of Obsession, Addiction, and Madness. He works as a life coach for individuals in recovery from any number of mood, addiction, or behavioral issues. Connect with Chris and his work at thebodyofchris.com.