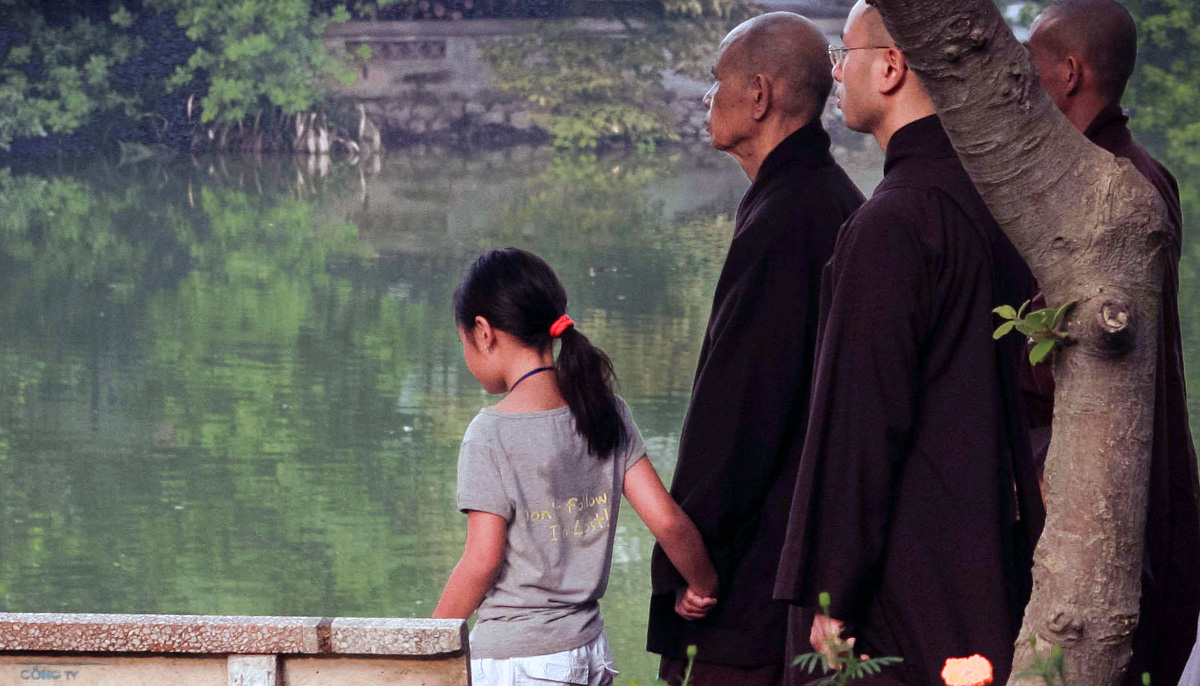 Waking up, I smiled. I’m not ordinarily fond of starting out running late, but there I was, behind schedule to get my gear packed and ready for pick up. It was the last morning of a retreat with Thích Nhất Hạnh, hidden in the hills above San Diego at Deer Park Monastery. Everyone else was congregating beneath the trees in the clear, cool, mountain air for the beginning of our last day.

When my suitcase was stuffed, zipped, and ready, I took it for a stroll on its rollers down a mountain road. It was a fresh, bright, and beautiful Southern California morning — a morning good to be “above ground,” as they say. I enjoyed my slow, peaceful steps synchronized to deep, calm breathing, and I felt the luminosity and warmth of the early autumn sun in my heart and all around. Little dragons of morning fog, rolled in from the Pacific, nestled themselves within green and tan mountain clefts. Lush vegetation in various hues of green seemed to have sprung alive, as if this instant was their common birthday. They all seemed to rejoice, each invisible root reaching in a little deeper, each branch replete with leaves reaching out to the blue sky.

His demeanor, light as a butterfly. His steps, solid as a water buffalo.

Finally releasing my baggage in the parking lot full of suitcases gathered together like a tribe of faithful servants, I knew I might be late for the morning talk. Yet I dropped that worry — no need to hurry. Walking uphill, I enjoyed walking meditation further — each step complete in itself, without anticipation of any next step. I was awakening to everything, within and without, not clinging to anything.

I was more than halfway up the trail when I noticed ahead of me three brown-robed companions on the path, also in no hurry. I veered towards them and joined alongside. Our rhythm of walking harmonized as one.

I glanced up at the trio of monks: two novices, and the third, my dearly respected spiritual teacher, Thầy (pronounced “tie,” Vietnamese for teacher.) A pleasurable surprise indeed. Without a word, we four continued walking as part of a much larger body. Slowly. Step by step.

About 20 paces on, without missing a beat, Thầy, ever the gardener, pointed off to the left to a new transplant amidst the trees along the path. Fresh as the dew. Smiling calmly. Total silence. Vast space. Our beloved Mother Earth beneath us and within us. Peace in every breath.

His demeanor, light as a butterfly. His steps, solid as a water buffalo. His joy at being alive as palpable as the awakening morning. Fully present. His life, a teaching.

Call it, if you will, mastery of non-attainment. The presence of being unconditionally present to your life, as it is, right now, just so —l ike this. Dedicated to living in such a way, don’t ask “Where is the teacher?” This teacher is everywhere, without fixed location.

No head is higher than your own. When you are attentive, the true teacher is within, with guidance and support along the path, in all sorts of marvelous ways. From morning clouds evaporating beneath the rising sun, to a seed you’ve planted now a flower newly blooming, or to recognizing in your heart of hearts what needs to be done.

In my years studying with Thầy and the Plum Village Community of Engaged Buddhism, I’ve learned many noble, needful, vital things. But were you to ask me right now what I’ve learned from Thích Nhất Hạnh, I might say, “Well, I learned how he tied his shoelaces — and how he walked in those shoes.”

It’s interesting how this chance encounter wound up. We came to a steep bend in the path, meeting the challenge by not altering our walking. Each step, only this step. Each breath, only this breath. As we slowly arose up the curve, a thousand people up ahead, one by one, suddenly saw Thích Nhất Hạnh coming their way. Earlier in the retreat, we’d all hiked up a mountain with him in walking meditation, as cells in one sangha body.

The collective buzz of conversations stopped mid-sentence. A guitar and a song ceased mid-note. In front of a thousand hearts, two thousand palms joined as one. People parted to make way. Thầy continued trucking gently along. Slowly, slowly. Step by step.

I am still reaching for what it felt like to witness, from his proximity, the impact he had upon a thousand followers. Like being in the eye of a cyclone? No. Words fail me. But the feeling still remains. It was like coming home.

I joined the two novices, moving off to one side. Now, a thousand others, forming a massive circle, became close to Thích Nhất Hạnh, too.

Thus have I learned. The greatest sermon is lived, not written.

Your presence is your message. Your life is all of life, to be lived to the fullest. All the rest is commentary.