Awaiting the results of the 2020 U.S. presidential election, Chenxing Han turns to the prose of Japanese poet and Buddhist monk Kamo-no-Chomei (1155–1216) and ponders his same questions, 800 years later. 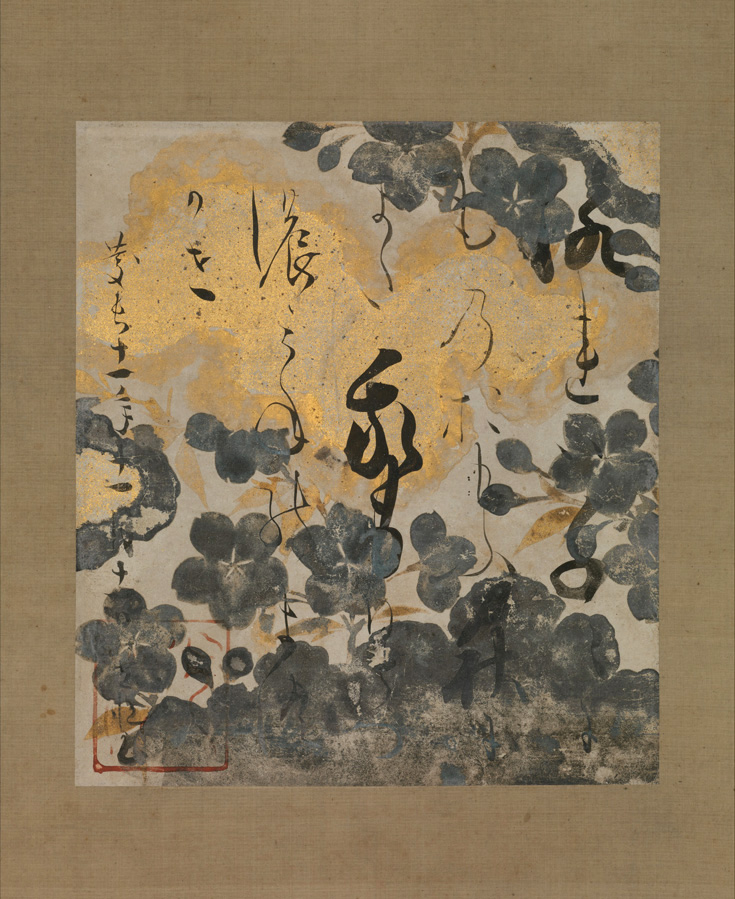 “Poem by Kamo no Chōmei with Underpainting of Cherry Blossoms,” 1606. Calligraphy by Hon’ami Kōetsu. Translation: “Gazing into the distance, / in a melancholy autumn mood, / is it for me alone that winds / howl through boughs of pines / on that solitary peak?” Courtesy the Metropolitan Museum of Art.

To understand
the world of today,
hold it up
to the world
of long ago.*

Watching the map of our nation color red and blue this past week, I worry these words like mala beads. The passage is from Hojoki 方丈記, literally “records from a hut ten-foot square,” written in 1212 by the Japanese poet and Buddhist monk Kamo-no-Chomei (1155–1216). Chomei’s lyrical essay, composed in a ten-by-ten lean-to in the mountains, chronicles the calamities he’s witnessed,

[i]n the forty years or so
since I reached the age
to understand the heart of things,

a litany of devastation. Fire. Whirlwind. Famine. Drought. Gales. Floods. A catastrophic plague. An earthquake whose aftershocks lasted three months. When the plague befell the capital, Buddhist monk Ryugo-hoin performed last rites for the multitudes of dying. It took Ruygo-hoin two full months to count the dead on the streets of Kyoto:

This did not include
the many, many
dead before or since…

Our nation’s dead from COVID-19 numbers well over 200,000. Economic disparity, racial injustice, ethnic strife, climate crisis—whether one cares to acknowledge these phenomena or not, their effects are felt by every human on this planet. As Chomei writes of the great earthquake of 1185 that left not a single temple in the city intact:

I hear tell
of another such calamity
in the past…

But I know nothing
of that time.

“The waiting is the worst part,” the patients on the oncology unit where I worked as a chaplain resident used to say. Has it really just been four days of agonized waiting? What an uncertain, unsettled week it’s been. But the Buddhist reflections on impermanence that are woven throughout Hojoki remind me: nothing is ever certain, nothing is ever settled. Seventy-six hours after Election Day, as votes are still being counted, it occurs to me that when the moment we’ve all been waiting for finally comes, regardless of who wins the presidency, the outcome will augur neither the happily ever after of our wildest fantasies nor the dreadfully ever after of our bleakest fears. I suspect it will feel like we are still, as ever, beginning.

Buddhist teachings on karma tell us that our every action of body, speech, and mind have consequences. In other words, we are more powerful than we know.

Even if we might never agree, is there some way we can learn to understand the language of each other’s hearts, even if it hurts our hearts to do so?

Watching the snail’s race between a bar of blue and a bar of red, two rectangles inching toward the 270 finish marker, it occurs to me that in this rendering, I’ll never see them overlap purple. Something I likely have in common with my political opponents: we each view the rival color with alarm, if not downright animosity. I’ve been conditioned to regard this as a battle, to perceive anyone who disagrees with me as an enemy. Where is the united in this state of America?

During our lesson last week, I struggle, using my rudimentary Thai, to tell my teacher about this divided and polarized America, this time when newsfeeds are forcefeeds of vitriol. My teacher, in turn, describes the pro-democracy protests in her country of seventy million. Her own sympathies lie with the protestors, but she harbors no hatred for those who support the military regime. “I am trying to understand them,” she sighs. The frown on her face is born not out of malice but from the difficulty of arriving at this wished-for understanding.

The beauty of Chomei’s prose and the wisdom of his social commentary are only accessible to me because of the translators whose painstaking efforts transformed these lines of Japanese into a language I know. The solace I find in Buddhist teachings is a priceless gift from the countless individuals who spent innumerable hours interpreting and translating the Dharma to facilitate its global spread. Would that I could be more like these translators, devoted to building bridges across seemingly untraversable gulfs of time and culture. If these gulfs can be bridged, what about the one that separates me from my parents’ neighbors, whose yard signs tell me we did not vote for the same presidential candidate? Even if we might never agree, is there some way we can learn to understand the language of each other’s hearts, even if it hurts our hearts to do so?

Living in this world of difference and discord is a vexing business. What kind of world do we want to create for future generations? What actions will we take to manifest that world, and how will we rejuvenate ourselves so we can act, over the long haul, in ways that are beneficial to all?

Eight hundred years later, I am asking the same questions that Chomei did, and I will be pondering them long after this election cycle is over:

where should we live?
And how?

Where to find
a place to rest a while?

And how bring
even short-lived peace
to our hearts?