“The message of my Buddhist practice is, ‘Be courageous. You are exactly what is wanted. We’re all different,'” says musician and composer Glenn Copeland. John Harvey Negru talks to Copeland about his life as a pioneer in music, his fourty-four years of Buddhist practice in the Soka Gakkai tradition, and his mission for the future. 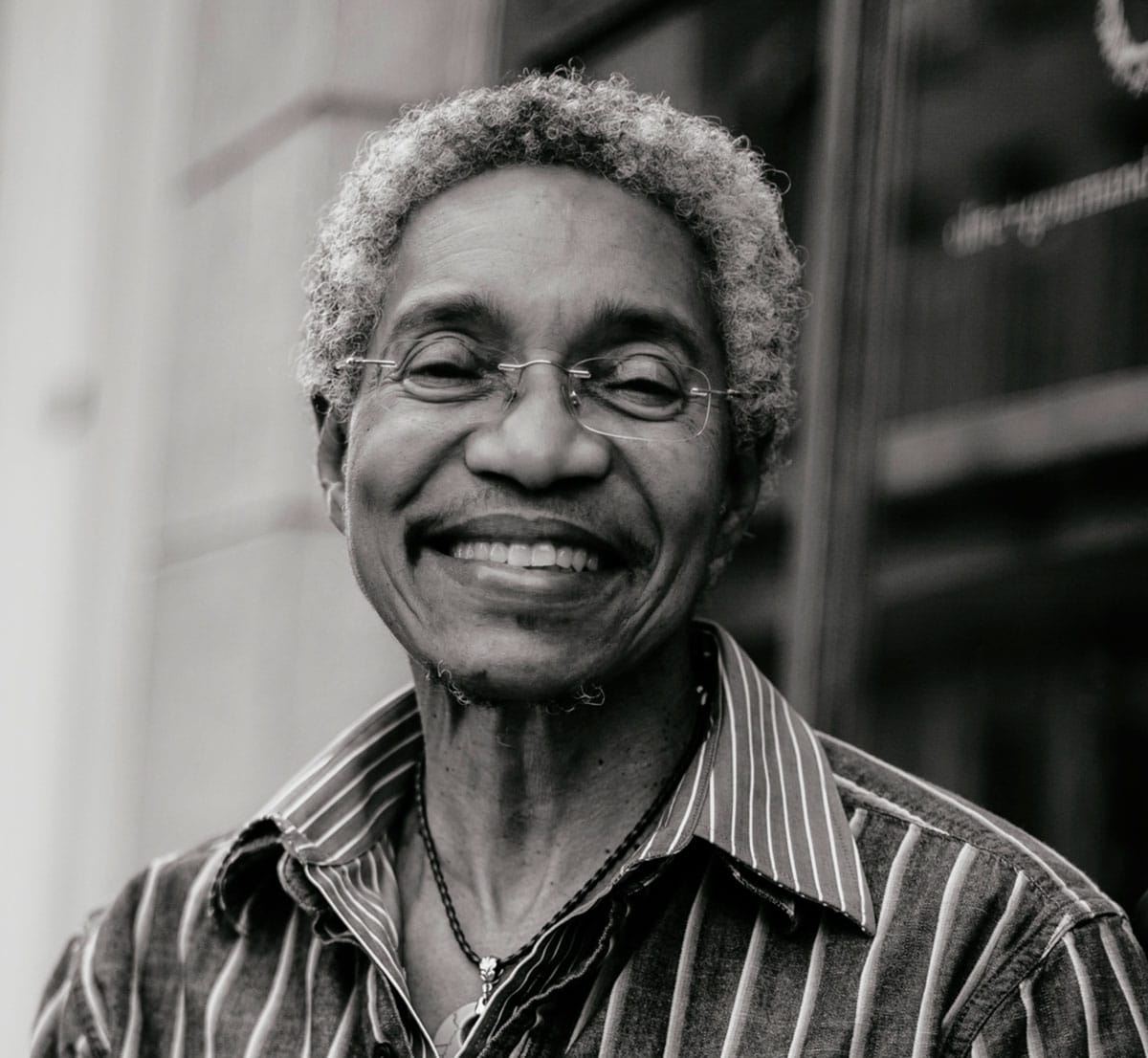 If you haven’t heard of Glenn Copeland, one of Canada’s musical greats, you’re missing a bodhisattva in our midst.

Those of a certain age likely saw him perform for decades in a different incarnation on CBC’s Mr. Dressup. You’ve likely also heard the children’s music he wrote and performed on Sesame Street, Shining Time Station, and the Treehouse Network. If you’re an aficionado of Canadian jazz, you may also be familiar with his more recent work, which is infused with world beats and sonic mystery.

As a Black, Buddhist, transgender pioneer in his field, Copeland seems to have lived many lifetimes worth of achievements in his 74 years. Today, he quietly plies his trade in the relative obscurity of Sackville, New Brunswick.

I spoke with Copeland about his life’s journey and his forty-four years as a practitioner of Nichiren Buddhism with Soka Gakkai International (SGI). Here is some of the conversation that ensued.

John Harvey Negru: Where does your story begin?

Glenn Copeland: I was born Beverly Glenn in Philadelphia in 1944. My dad was a principal and my mom was also an educator — we were considered very successful.

I grew up in a very musical household. My dad loved classical music. Every day after school he’d come home and spend three to five hours playing classical music on our grand piano. He loved Chopin, Bach, and the like.

My mother played piano too, but not classical. She had many interests and she was a very formidable woman. She was the first black woman to enroll in graduate school at Penn State University in the 1940s. At the time, integration didn’t include living quarters, and they wouldn’t house her on campus. They were happy to have her at the university, but not able to provide housing arrangements. A Quaker woman came forward and offered her a room in her home, which allowed her to attend the school.

The music comes to me. I can’t say I have a plan to write it.

That’s how my family became Quakers. Also known as the Religious Society of Friends, Quakers had been enormous supporters and “conductors” of the Underground Railroad. Today, the Quaker community continues to an active champion for all peoples around the world to lead fruitful lives free of oppression and fear.

My family was identified as Black, but really, none of us are entirely this or that. We’re all more than we appear. One of my grandmothers was Cherokee and another was Celtic, with red hair and blue eyes.

How did your career in music begin?

As a teenager, I started listening to world music from West Africa, China, and India. I became enamored with the philosophy of the East — it spoke to me.

I was very musical, but I didn’t play an instrument. I took up singing and found I really loved the European lieder tradition. I moved to Montreal in 1961 to study music at McGill University. I became a classical singer representing Canada in a concert of lieder at Expo 67, and I came to the realization that I could, and should, be writing my own music.

I’ve been writing and performing since I was 27, that’s 47 years of writing music now. I’ve written three musicals for children, and I’ve also put out four albums of music for adults, but most people know me compartmentally. The music comes to me. I can’t say I have a plan to write it. The bigger question for me is how it can be used as a vehicle for encouraging heart and courage.

When did you know that you were transgender?

My mother has told me that in 1947, I told her I was a boy, not a girl. But in those days, there was no language for that. There was no way to integrate it into “normal” life. The thought faded into my subconscious for many years. At McGill I came to the point where I just stopped acting according to the heterosexual norms. At that time, living outside the heteronormative was still against the law. I was in a long-term relationship with a woman, and the assistant dean of women at McGill wanted me expelled.

The pressure was so intense that I left the university. It was also a time of turmoil in Quebec, in the midst of the October Crisis. Quebec needed to reclaim its identity and I didn’t feel part of that story, so I moved to Toronto in 1969.

Five years later, a friend who was a scriptwriter for the CBC show Mr. Dressup kindly wrote me into an episode as a singer-songwriter. They liked my performance and my comedic spirit, so I became a regular. I wrote music and performed as female on that show until about 2002.

It wasn’t until 1994 that I consciously understood that I was transgender, which I publicly announced in 2002.

How did you first encounter Buddhism?

In 1972 I attended a small talk by Chögyam Trungpa Rinpoche in Montreal and he made a huge impression on me. There were maybe 20 of us in the audience. He said, “I know you’re all shopping, but the important thing is to buy something.”

The next year, while in Los Angeles, a woman came up to me on the street and began to tell me about the local Soka Gakkai. I went to a small SGI gathering at someone’s house and fell in love with the chanting. I’ve been involved ever since.

What does your dharma practice look like, and how has it evolved over the years?

I found an SGI group when I returned to Montreal from California. Our groups are mostly home-based. We meet for chanting, sharing, and study. In a nutshell, the practice is based on faith, practice for self and others, and study. We have deeply held internal beliefs that lead to profound changes, and study the writings of Nichiren Daishonin and his elucidations on the Lotus Sutra, and the writings of Daisaku Ikeda, the President of SGI.

For me, Buddhism is about action, not theory.

We chant Nam Myoho Renge Kyo and portions of the Lotus Sutra for the happiness of ourselves and others, and take compassionate action to encourage and support those in need of this. Practicing in this way leads to wisdom, compassion, courage, and good fortune.

For me, Buddhism is about action, not theory. My goal is to create a life condition to be able to bring out and maintain a state of absolute happiness, whether in the midst of joy or suffering. How you engage, based on that evolving condition, is the action. Everybody has their own mission.

You live in a small town — what does your practice community look like in Sackville, NB?

My daily practice usually involves about 40 to 60 minutes of chanting and five to 10 minutes of recitation from the Lotus Sutra.

I’m the only one from my community in Sackville, but there is a wonderful group in nearby Moncton, NB. Gathering with others is essential to my practice, so in addition to my daily home practice, I go to Moncton about once a month. There are SGI groups all over the Maritimes with whom we meet once or twice per year.

Nichiren is quite successful at cultivating diverse, inclusive communities. Why do you think that is?

We’re very welcoming of everyone. When I became involved, SGI was already a very diverse group in America. There were thousands of Black people already there and many in leadership positions. There are SGI communities in 197 countries. I recently saw a photo of a gathering in West Africa where more than 3,000 locals from one region of one country were gathered. We’re seeing a huge influx of young people right now.

There are many inspiring and diverse teachers in North American Buddhism today, such as Myokei Caine-Barrett, Shonin, Lama Rod Owens, Rev. angel Kyodo williams, and others. What are your thoughts about their turning of the dharma wheel?

It is tremendously exciting to see how Buddhism is changing, and how people and organizations can grow.

Finding my practice was the single most important thing in my life.

In the 1960s, SGI was very heteronormative. One time, an SGI leader from Japan was visiting Canada and told us that gay people would become heterosexual with chanting. I said, “No, that’s not going to happen.” Three years later, SGI became one of the first organizations in Canada to perform same-sex marriages. In the mid-nineties that was adopted by SGI worldwide, though it’s implementation may still be restricted based on the laws of individual countries.

Humans naturally judge and exclude. It’s in our DNA, it’s in our brain. The goal of Buddhism is to reduce that as we mature. It’s about our hearts. I see this new activist-driven, engaged Buddhism as a wonderful development.

You have accomplished a great deal in your life as a songwriter, children’s performer, a visible minority on television, and as a transgender man. How has your Buddhist practice informed your journey?

Finding my practice was the single most important thing in my life. The message of my Buddhist practice is, “Be courageous. You are exactly what is wanted. We’re all different.”

Oppression is a characteristic of all societies and times. They say it takes seven generations to heal those traumas. The official end of slavery in America was 1866. My great-grandmother was the first generation after that, my grandmother was the second generation, and my father and mother were the third.

Each generation makes incremental change. For example, being transgender is more and more considered a fact of life now and is openly discussed. That was impossible in the past. I hope for the next generation it will simply be something normal.

What’s ahead for you?

In ten years I’ll be 84. What do I want to accomplish in the years I may have left? I contemplate my death daily. Contemplating one’s death is an essential component of Buddhist practice, isn’t it?

Today’s young people are so aware. It’s my mission now to support them.

I want to continue supporting youth. I want to use my music and lectures to talk to youth. They represent the possibility for the future of the human race.

Last summer, I performed and lectured about what’s important to me at a music and arts festival here in Sackville. There were about 300 people in the audience, and more than 80 percent were millennials. At least fifty of them came up to me afterwards and hugged me, saying, “We need our elders to give us this message. Thank you!” That’s how I see myself now: an elder. Today’s young people are so aware. It’s my mission now to support them.

To learn more about Copeland, visit his website, or watch his lecture at Red Bull Music Academy.

John Harvey Negru (Karma Yönten Gyatso) is founder and president at The Sumeru Press, Canada’s leading independent Buddhist book publisher. He also manages canadianbuddhism.info, a directory of more than 600 Canadian Buddhist organizations, and has been involved in a wide variety of Buddhist community development projects over the years.