With automation increasingly replacing human work in many industries, Cristina Moon examines the shortcomings of artificial intelligence when it comes to the intimate role of a priest. 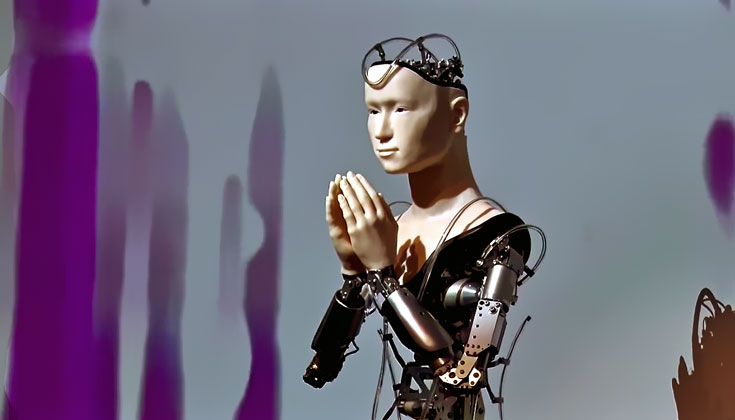 A robot version of Kannon at the Kodaiji temple in Kyoto, Japan. Screenshot via YouTube.

Automation is poised to replace a slew of workers, from truck drivers to paralegals, revolutionizing our economy and way of life. But can a robot replace that most intimate and human of roles: priests?

Kodaiji, a Rinzai Zen temple in Kyoto, recently unveiled a $1 million robot called Mindar that preaches Buddhist teachings to temple visitors. Styled after the bodhisattva Kannon, also known as Guanyin or the goddess of compassion, the humanoid statue moves, speaks and records what it sees through a video camera in its left eye.

Mindar’s creators at Kodaiji and Osaka University are quick to concede that their robot has a long way to go before it can replace a human priest or teacher. For the moment, for example, it is not interactive. Nor is it powered by any of the machine-learning algorithms that have technologists like Elon Musk warning of a future in which machines have more processing power than human minds. (Endowing Mindar with AI and more autonomy is, however, in the plans.)

Can a machine vibrate the frequency of enlightenment?

Even if Mindar memorizes all of the Buddhist sutras and is able to act independently, it will still fall short of what an enlightened human teacher can do. That is, if its creators and programmers continue to focus only on giving Mindar a conceptual understanding of Buddhism. This is something that many Zen practitioners may already know, as zazen and Zen temple protocol are all about what to do with your body rather than meditating on a teaching or concept. (At Chozen-ji, the Rinzai Zen temple where I live, we take it even a step further. The belief that Zen — to transcend all duality, life and death — can be approached through the human body is a fundamental tenet.)

Zen and Buddhism overall are full of stories that at once turn our attachment to teaching delivered via words upside-down and suggest the indispensability of the human body. Not only do Buddhists emphasize the preciousness of this one human lifetime. Many believe that humans are the only beings in this realm, and in others, that can be enlightened. There are also accounts in Buddhist teachings of enlightenment being transmitted not through words or concepts, but embodied action. Mahakasyapa, for example, was recognized as enlightened when his teacher, the Buddha, merely held up a flower instead of sermonizing with words — and could perceive that his student understood this teaching.

Our attachment to words isn’t the only thing turned upside-down by Buddhism. So is logic, a fundamental assumption and building block of computer programming. Upending our certainty about how the world works and who we are is core to Zen koan training, for example. There is no logical answer to “what is Mu (emptiness, void)?” The answer, instead, has to come from you — you becoming Mu and breaking free from dependence on reason, demonstrated to your teacher in a spontaneous and intuitive encounter.

Perhaps it is possible for AI to act so surprisingly — as Google’s AlphaGo did when it beat one of the world’s top Go players — so as to throw a human into realization-sparking doubt. The growing intelligence of computers may, indeed, be enough in itself to make us take a hard look at whether a human being can be defined by our thoughts and our physical container — like a computer is. Just the sight of a robot preparing a beautiful meal or conversing with us fluidly could make us ask, “Who am I?”

But finally, what about that quality of human beings that transcends our thoughts and physical containers? In my lineage, we call it kiai — akin to an energy signature. Someone who has mastered kiai can take away fear, turn up the dial on collective effervescence, and do things that are downright spooky. Kiai is the quality that an enlightened teacher possesses so that just being around them makes it feel like there’s a sword at your throat or like you’re being enveloped in compassion. At the core, kiai and all energy and matter are simply vibrations. Can a machine vibrate the frequency of enlightenment?

Mindar’s creators would perhaps do well to consider the physical bodies of living, realized teachers. We’re teaching cars to drive themselves through millions of hours of road-testing. Perhaps we can use the same techniques to teach an android Buddhist teacher to move through the world in ways that encourage awakening, rather than just sermonizing about it. Posture, breath, and even the firing patterns of neurons in a Roshi’s or Sayadaw’s brain might be converted into useful bits. The results could be eye-opening, and maybe even enlightening.