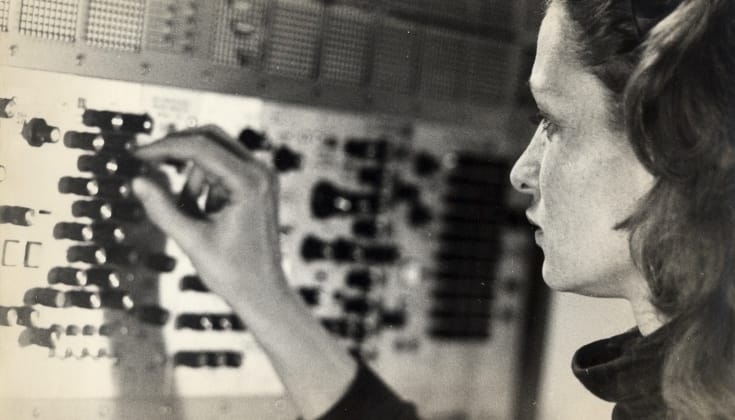 Éliane Radigue with her synth in 1971, photo by her son Yves. The Kitchen Archive, via The Getty Research Institute.

When it comes to Buddhist art, we often first think visually: Buddha statues, Himalayan thangkas, Zen calligraphy. But sound has always been key to Buddhism — an oral tradition, primarily, for hundreds of years — from spontaneous poets like Milarepa to musical mantra chanting and Tibetan throat singers. With her Trilogie de la Mort, French electronic composer Éliane Radigue, currently featured in the Rubin Museum’s “The World Is Sound” exhibit, created a modern masterpiece of dharma-infused sound. 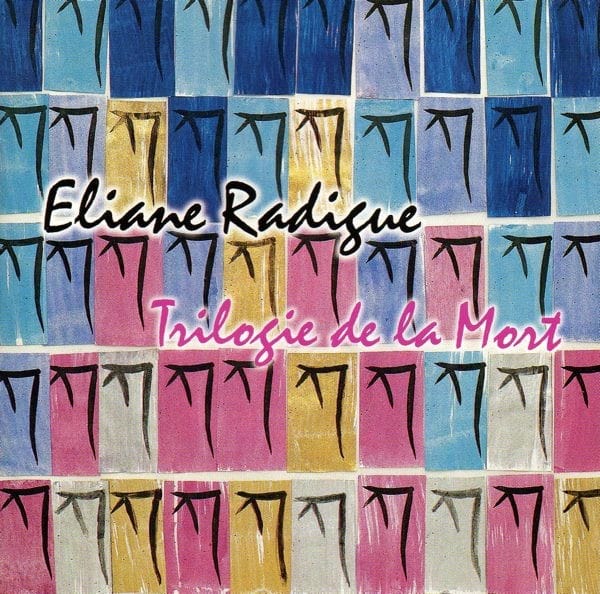 It’s a neat fusion of the modern avant-garde and the traditional: minimalist synth drones recall the reverberation of bells through a mountain; a continuous arising of tones vibrate, slow and subtly. Full immersion, by way of patience and good speakers, is highly recommended.

Radigue says that while her music is always changing, that change is often almost imperceptible; for comparison she evokes a river, constantly shifting its quality of light and depth, while maintaining the appearance of a consistent substance. In a conversation with the Rubin Museum, she expressed hope that her work, with its gradual flows of sound, will lead listeners to a detachment of ego, and to an awakening to dharma.

Radigue discovered her electronic path and her dharma path at a similar junction in her life. In the early 1970’s, she went to New York and was introduced to the ARP 2500, a synthesizer she would go on to compose and produce her music with for the next 30 years. Four years later, she was introduced to Tibetan Buddhism and briefly gave up music to focus on her practice, before being encouraged by her teacher, Pawo Rinpoche, to explore dharma through the medium of sound. She went on to compose five pieces in the early 80s, inspired by the great sage Milarepa. Following this, in a period during which both her son and her teacher died, she produced Trilogie de la Mort.

Trilogie de la Mort has three hour-long tracks: Kyema, Kailasha, and Koumé. Kyema is perhaps the most explicit in its Buddhist inspiration, as it is meant to be a rendition of the intermediate states of consciousness described in the Bardo Thödol. Kailasha recreates an imagined journey up Mount Kailasha, the sacred Himalayan mountain, as the transition between states of being chaotically fold over different perspectives. Finally Koumé (a portmanteau Tibetan word that Radigue created using the words for “fire” and “holy body”) invokes the process of rebirth and the truth of death as perpetual re-beginning. 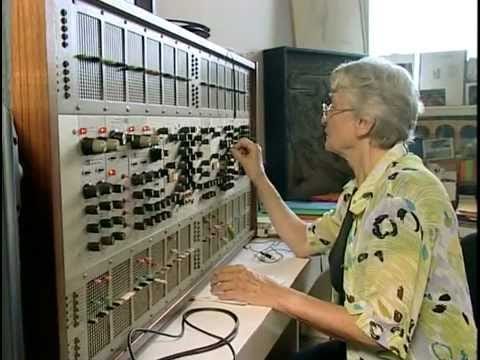 Listening to Trilogie de la Mort is an intimate auditory experience. It transports the listener outside of the ego-subject, and brings their awareness into the sonic phenomena. Radigue often speaks of her attempts to follow the sound and bring it to a natural conclusion, and the slow drone of her synth reflects the floating patience of this inevitable change. The album is a meditative exploration of consciousness that engages and pushes the limits of our auditory awareness — we might perceive the grand shifts of nature as trees blossom, or smell the material experience of a cake changing from batter to treat, but the isolation of tones as they fluctuate just above silence is a subtle experience that we rarely get to engage with. Some of the artistry of Radigue’s composition, of course, lies in its simplicity: it creates clear avenues for us to drift along, allowing us to lose themselves in the music. You might emerge from it a little dazed, as the intense clarity of the tones can be overwhelming, swaying between fear and elation.

Radigue offers this spontaneous lyric on how to engage with her music:

Now 85, Radigue is still producing music. She has since put away her ARP 2500 synthesizer to work exclusively with acoustic instrumentalists, composing a series with cellist Charles Curtis and creating an ongoing multi-collaboration work, Occam Ocean.