In his bio, cartoonist David Sipress – he of The New Yorker and Lion’s Roar – states that he considers Buddhism to be “an excellent source of jokes.” Clearly, it is: Sipress has done Buddhist-themed cartoons for years. But we wanted to know more. Happily, David obliged. So, David, what is so funny about Buddhism? 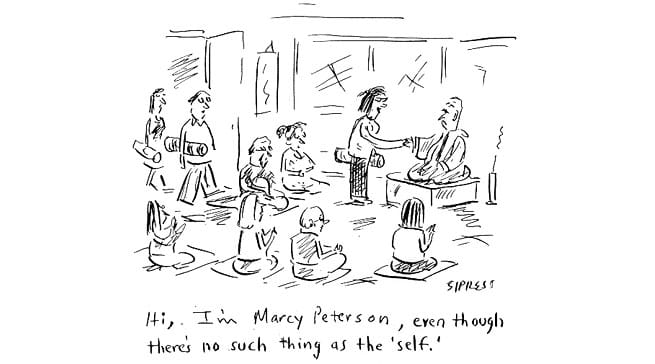 It begins with language. Words like “nothing” and “self” are rich in comic possibility when they are transposed from the Buddhist context into our Western context. The space between these two worlds is where the funniness lives. For example, there’s my cartoon of a guy in a meditation class asking the teacher, “Exactly what is this ‘nothing’ I’ve been hearing so much about?” Or the woman in another cartoon who introduces herself to the meditation teacher.

Juxtaposition and incongruity are the working material of cartoon humor. I love taking the richness and ambiguity of the language of Buddhism and juxtaposing it with the more mundane aspects of Western popular culture. I recently drew a cartoon of two people watching a TV show called, “The Amazing Race to Enlightenment.” The announcer says, “This week, can Jim and Suzy achieve right mindfulness? And will Barb and Candy be eliminated for relentless clinging to the self?”

Beyond language, there is the notion of paradox. Paradoxes—which of course, are all about juxtaposition and incongruity – are funny. Our struggles to grasp Buddhist ideas about what we call, “reality” – about its fleeting nature – ideas that lead to an understanding that opposites can be equally true and real at the same time since neither is actually “real” since there is really no such thing as “reality” – oy vey! – all this is terribly confusing to the average western mind, and therefore, fertile terrain for the cartoonist. One of the great New Yorker cartoon tropes is the In box and the Out box, sitting on a businessman’s desk. I did one of a Buddhist monk who has only one box on his desk – the box is labeled, In Out.

And anxiety is funny. Almost all my cartoons are about it, in one form or another. I’ve done more than a few about the anxiety we feel, and the misunderstandings that occur, when we try to apply Buddhist ‘philosophy’ and ways of being to our very un-Buddhist everyday lives. One of my favorites is of a man reading a book entitled, “How To Be In The Moment.” Lying on the table in front of him is a second book; it’s entitled, “How To Be in The Moment After That.” The very first cartoon I ever published in the New Yorker took place in a meditation class. At the front of the class there’s a sign that says, “The Journey to Enlightenment.” A worried woman raises her hand and asks the teacher, “Are we there yet?”

I’ve done several cartoons about the difficulties of trying to meditate “correctly,” and the confusion we feel about a process that is non-linear and requires us to revisit, or even abandon, our habitual notions of who we are. Another woman in a meditation class asks: 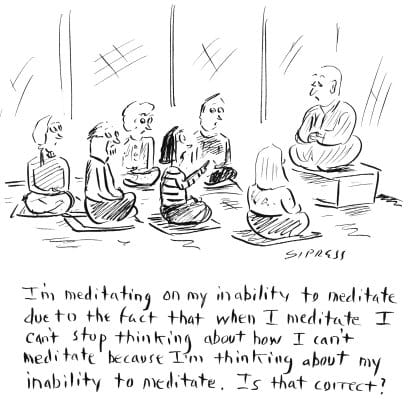 Of course, we can’t discuss anxiety without mentioning something we hear quite a lot about in Buddhism — death. Death is also hilarious. The Grim Reaper is a familiar character in cartoons. When you move him into a Buddhist context, with it’s “strange” ideas about such things as reincarnation (as opposed to such less “strange” ideas as heaven, or hell), jokes abound. For example, I did one of a monk saying to the Grim Reaper, “You again?”

Finally, it has to be said that Buddhism is funny because, unlike some other “religions,” Buddhism doesn’t take itself too seriously. We can poke fun at it because it’s not afraid to poke fun at itself – whoops, there’s that word “self” again.