“When the body has dissolved into the four elements, where will you go?” asks the koan called Doushuai’s Third Barrier. Vastness into vastness, concludes Zen teacher John Tarrant. 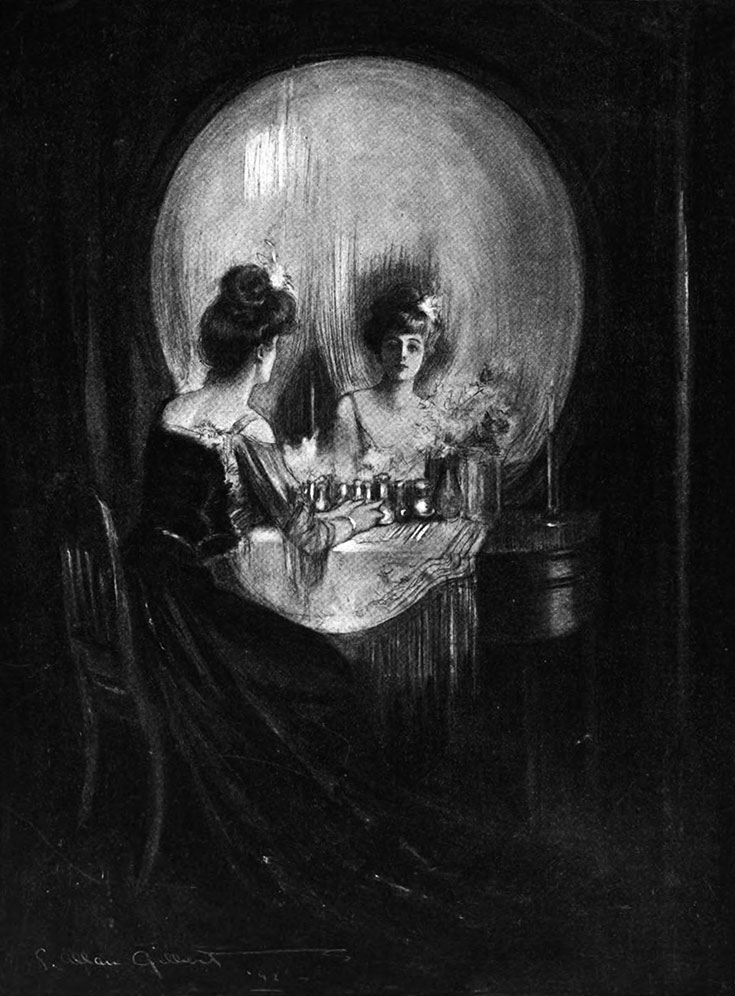 “All is Vanity” by Charles Allan Gilbert. Image digitized by Google from the collection of the Harvard University Library / Public Domain.

This is a time of great peril and hardship. To see this clearly without panic—just to see, and to know also that there is a practice and a path that is not every-man-for-himself—is an endlessly helpful thing. The old Chan masters of China were in just such a situation, when the known world was ending and danger was at every turn. They took this into account in their practice and left instructions for us. To find a way where there is no way, we turn toward those old teachers and toward the great matters of life and death.

Here in Northern California, wildfires are burning on schedule, the garden roses are cantaloupe colored in the yellow, diffuse, and scattered light, and water is in short supply. Friends are telling me about the Permian extinction event that made the one in which we lost the dinosaurs look half-hearted. It was 250 million years ago, and came courtesy of volcanic eruptions. My friends find long views consoling; life, consciousness, will continue, if not here then somewhere else.

Um, Are You Alright?

In Whole Foods yesterday, someone was holed up in the women’s bathroom, a huddle of sympathetic employees gathered outside. “Are you alright?” they asked every few minutes. “Yes, yes, I’m fine.” It had suddenly become all too much and the young woman had gone to ground. “The masks are back, the smoke is back, I’m not leaving this bathroom.”

Every manifestation wants to persist in its being. This includes oceans and planets and galaxies. Meanwhile, the changes are always at work.

The Pure Land poet Issa loved his young daughter. Here she is caught indoors on a wet day:

Less than a year later she died of smallpox, and he wrote:

Ah yes, the intense sorrow and the feeling for the eternal are layered together. We don’t seem to have a choice about this, either the sorrow or the feeling for eternity. Grief is involuntary, the illuminated quality in our lives, also involuntary. When I look, that mysterious light is always present—under, within, on top of, throughout. The interleaved moments shine, they fill the galaxy—the sound of night rain, the cry of the geese in flight, the temple bell, the smell of toast.

But really anything will do. “What is Buddha?” “Three kilos of flax,” goes an ancient conversation.

Eternity is in everything. We’re stuck with it. It’s even in dying, which can be unpredictably full of intimacy, beauty, comedy, pain, boredom, awe—all in all, truly something not to be missed. Wiping the brow of a dying person, wiping the brow of a child with the flu—these are complete actions, revealing and justifying the universe.

“The entire meaning of your life is contained in the current matter,” said Mazu, the grand Chan master. Sooner or later, death is that matter.

When the body has dissolved into the four elements, where will you go? This koan is called “Doushuai’s Third Barrier.” I encountered this enquiry when I was a student in the Maui Zendo, trying to fend off the endless changes, hoping to give a coherent shape to my life, or at least to my consciousness.

I panicked at questions that couldn’t be answered, which meant most of the things that are interesting to consider. The questions were difficult because I was looking in the wrong direction, as we so often do—that is, away from life. Questions about death and the after death are a part of the traditional Chan koan curriculum. Dignified by their antiquity, they are the primordial instance of that which cannot be negotiated with. “I’ll never get anywhere with that,” ran through my mind. “I’ll give up and become the gardener.”

When I stopped panicking, and decided that gardening has a lot to be said for it, I understood that I could just go ahead and fail. With this consoling thought I turned toward the question. It was like a demon in a dream. I formed a relationship with it. It was enormously encouraging that I didn’t have to win through to the answer, but could be welcomed and included.

When we sit on into the night with impossible questions, that sitting is already a kind of answer and a path. We have no answer except by going to the place where we are free, beyond gain and loss, understanding and confusion. There, even if we are afraid, we are not afraid—the light is inside our fear.

Another traditional Chan way to approach the question of death is to stroll, stumble, hurry, struggle, fall accidentally, through the gates of samadhi—the deep concentration of meditation—and look around. This is to go to the place that doesn’t have a place or a time. It’s before you can do or say the wrong thing. And when you really enter this moment, it has no end, no beginning; it is older than the universe that seems to contain it. Then it will inevitably occur to you: “I’ve always been here.”

It’s happening now as you read and I write, and the cool, foggy, west wind has risen and drifts through the apricot and cherry trees, along with the sounds of the birds settling for the evening. “We’ve always been here,” is something you might notice. We were not born and we do not die. This is a profound expression of the reality of the emptiness at the bottom, the not-knowing that we are always moving though. That is always the ultimate thing.

An Australian poet told me of climbing a tree as a six-year-old, looking out over the Falls Country in New South Wales where water tumbles off the plateau heading east for the Pacific. She looked at her hands and her green sleeve with flowers on it and her dress, and thought of all the things she had in mind to do, and with this moment of ambition became a self, a me.

When we become a self we imagine there are parts of the universe that don’t belong to us anymore and we have to grab them. And that there are parts of the universe that are threats and not ourselves, and we have to fend them off. A lot of portcullises and barricades are involved. The self is primarily effort. Awakening is forgetting to try so hard. You just stop working. There is nothing else to gain; everything is already here.

Well, what are we then?

One night in retreat I dreamed some tribespeople are weaving the universe. They sit together on the ground, men and women in a forest clearing, weaving, weaving. Great trees surround them. It’s an intricate and fine pattern they are making and it is a very long piece of cloth. They have no thought other than of weaving, but the cloth extends without end.

The Chan masters used to say the world is one strip of white silk.
If you understand this, you are free to walk among flames or twining roses, while the birds call to each other. According to the Chinese version, the bodhisattva of compassion Guanyin walked happily in hell as flowers grew and fountains played, and the children clung to her skirts, until the demons in all kindness begged her to leave. We can die. It’s okay, really.

We just change places with the night sky.