On a backpacking trip through Nepal and Ladakh, Ryan Fitzpatrick encountered his fair share of expectations, attachments, and obstacles. Though none of us are traveling right now, here he shares what we can learn when we do. 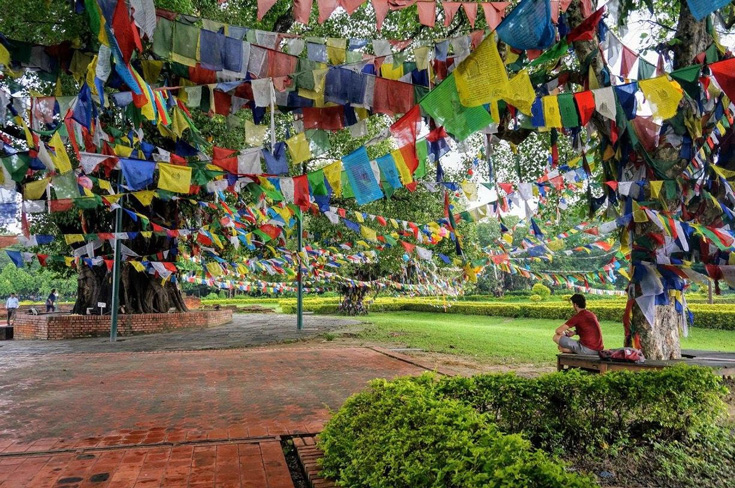 The author (right) at the grounds of the Maya Devi Temple in Lumbini. Photo by Jennifer Fitzpatrick.

A few years ago, my wife and I undertook a four-week backpacking trip through Nepal and the Ladakh region of India. We visited Lumbini, which is said to be the birthplace of the historical Buddha, and the first of the four pilgrimage sites he identified for his followers to visit in the Mahaparanibbana Sutta.

While most of our time was dedicated to hiking in the Himalayas, I saw Lumbini as a chance to connect more deeply with my burgeoning Buddhist faith.  Fresh off a five-day self-guided trek in the Annapurna Conservation Area, we slung our backpacks onto the only bus from Pokhara to Lumbini and found seats towards the rear. We settled in as a six-hour promise became a ten-hour slog southwest from the shadow of the icy Himalayas to the steamy wetlands and flooded rice paddies of Nepal’s border with India.

The Dharma was alive here.

The journey was replete with surprise obstacles: busted tires, livestock traffic jams, a three-car crash derailing us onto the side of the road. Expectations, attachment, obstacles. We’d gone 24 hours without a proper meal, subsisting on nuts, Oreos, bread, dried ramen, and water. We befriended some Peace Corps guys and talked politics and history and home. Eventually, the bus dropped us off in the dark alongside the town’s main street, monsoon rains flooding in waves, and we hustled over to the nearby Lumbini Village Lodge that had rooms for $6 per night. The lodge was supposed to be our last stop in Nepal, our final two nights before departing for India  and Ladakh. It was a sweltering hostel without A/C, blankets, or bed sheets.  But what we did have were bed bugs. We saw the telltale spots of blood on the mattress and raced back out into the night, booking a room nearby at the more expensive Sunflower Travellers Lodge, one of the only other places open in town.

We woke up comfortable on the 4th of July at the Sunflower. Normally, we’d be home amidst friends and fireworks on American Independence Day, but on this day, we were ready to celebrate the Buddha’s liberation from samsara. The historical Buddha, Siddhartha Gautama — not a mythical figure but an actual person — was born there in Lumbini more than 2600 years ago. It was there that he began his journey to becoming the Buddha we know today.

We rented bicycles at the lodge and rode just across the street through the gates of the sprawling wetland sanctuary dedicated to the Maya Devi, and home to tributary temples from Buddhist nations the world over.  There were dozens of temples, creating a functioning Buddhist EPCOT out of the swamp where the original ruins of the Buddha’s birthplace were unearthed in 1896, and verified as a World Heritage Site by UNESCO in 1997.

The Maya Devi itself is a snowy white square fortress of a temple protecting the actual marker and interior ruins of the Buddha’s birthplace. A 2,200- year-old sculpture depicting the birth was found on the premises and is now permanently displayed over the birth marker stone. Monks chanted and prayed and meditated inside. I did as well, meditating on the emptiness of time and space, on the delusions of movement and past and future. Behind the temple, monks and holy men and women meditated under a tree much like the Bodhi Tree in India. I meditated under the tree cross-legged, sheltered from the incoming storm. When it really started pouring, we ducked back under the roof of the Buddha’s birthplace. 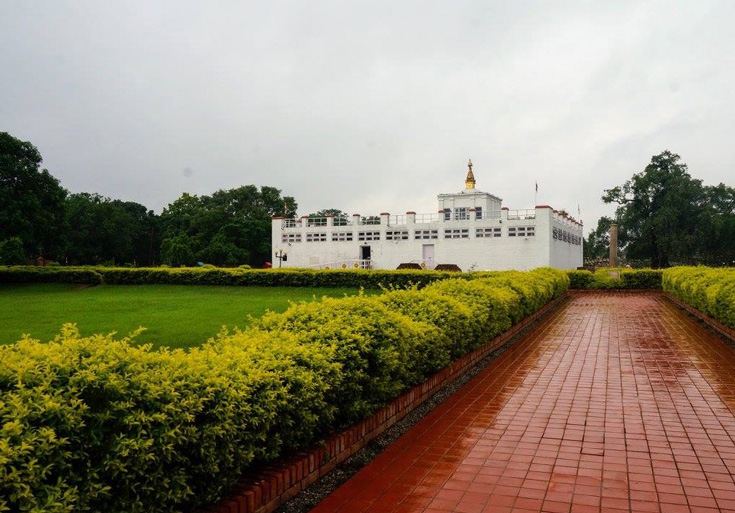 The Maya Devi Temple. Photo by the author.

After the rain slowed, we spent hours wandering the vast complex.  It was a vision of a Pure Land. The Dharma was alive here, with vibrant, fresh energy and strong faith blossoming in the minds of the monks we crossed paths with wrapped in maroon and saffron robes, praying, chanting, meditating, or running errands and performing mundane tasks. We saw no other travelers the entirety of the day.

The next day, we found a bus to nearby Bhairahawa and the Gautam Buddha Airport for a short flight to Kathmandu, from which we’d fly to Delhi. The flight was late, so I splurged on a cold Heineken, and we sat on the floor to wait for our gate assignments. An aged monk in maroon robes approached and asked, in English, if he could sit with us. His eyes weren’t so good, he explained, and could we please tell him when the gate assignments were made?

He thought for a second, laughed, and said, ‘First, you must not harm anything or anyone.’

We got to talking, and he told me about his escape from Lhasa in the late 1950s during the Chinese invasion of Tibet. Eventually, he fled to Nepal and went to monastic school before returning to India in 1973. In the 1980s, he moved to Dharamsala, and now travels the world teaching the Dharma and giving lectures. He’d perfected his English traveling across the United States over many decades. I was struck by his humility, his quiet peace, and his laugh. I felt completely at ease with him. I worked up the courage to tell him about my simple Buddhist practice, and asked him, right there on the floor of an airport terminal, if he had any advice for me to strengthen my practice.

He thought for a second, laughed, and said, “First, you must not harm anything or anyone, directly or indirectly. If you feel anger, you must let it wash over you, do not act on it. After that, practice compassion with all living beings, give and be kind to all. But to do no harm is most important. Practice, practice, practice.”

It struck me that this man, who was forced to flee his homeland, who has been a refugee for nearly his entire adult life, was full of joy and kindness for all and any strangers lucky enough to meet him. Later, I watched him light up the faces of others in line to board the plane: locals, travelers, children, and the very old. That is the power of liberation, a shining example of it right where the Buddha’s lessons began.

Ryan Fitzpatrick is a writer and civil rights attorney in Washington, DC, where he lives with his wife and daughter. An avid hiker and backpacker, you can often find him roaming trails throughout the region. Ryan has been practicing the dharma since struggling with himself in law school in 2011.