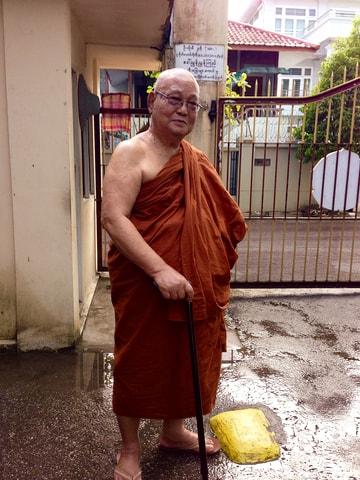 Jake Davis recalls the legacy of Burmese meditation master Sayadaw U Pandita and his influence on the Western Insight movement. From the Fall 2016 issue of Buddhadharma.

When Sayadaw U Pandita came to Insight Meditation Society in Barre, Massachusetts, in 1984 to lead a retreat primarily for a small group of Western teachers and senior Western students, most knew him then only as the successor to the Mahasi Sayadaw, who had passed away two years earlier. Yet for many of those who are the most senior teachers in the West today, that retreat provided a singular opportunity to do long-term intensive practice with one whom they came to regard as a true master.

When I was training with him decades later, U Pandita pulled out photo albums from that retreat. I remember his joyous smile as he showed me pictures of Joseph Goldstein, Sharon Salzberg, Jack Kornfield, and others, glowing from months of intensive practice and of course looking a good bit younger than I remembered them. Over the course of this and subsequent retreats held in the U.S., Australia, and elsewhere, many of these Western teachers describe not only training in satipatthana (mindfulness meditation) practice with a level of energy and precision beyond what they had previously imagined possible but also for the first time engaging in intensive long-term practice of the brahmaviharas: metta, compassion, sympathetic joy, and equanimity. The profound impact of this pairing—U Pandita’s precise energetic style of mindfulness practice with brahmavihara practice—on the way in which Buddhist meditation is taught in the West is abundantly evident. However, it is not always clear to newer students how many contemporary Western presentations are in large part a legacy of U Pandita’s formative guidance of a generation of Western teachers.

U Pandita was born in Burma in 1921. Losing his mother at age four and his father at ten, he began his primary education in the traditional way, at a monastery, and ordained as a novice monk when he was twelve. At eighteen, he went to study with the great Sayadaw U Kelasa of the Kyauk Tan Mahabodhi Monastery near Bago and ordained as a bhikkhu there at twenty. U Pandita would go on to become a distinguished scholar of the Pali texts in his own right, teaching textual studies in Rangoon, earning the preeminent title of Abhivamsa, and eventually participating, when he was thirty-three, as both Reciter and Corrector of Pali in the Sixth Sangha Council of 1956.

Many contemporary Western presentations of Buddhist meditation are in large part a legacy of U Pandita’s formative guidance.

While teaching Pali in Rangoon in his late twenties, U Pandita also studied English with Saya-gyi U Hpe Thin, and the two of them made an agreement that whoever came to see dhamma first would tell the other. Saya-gyi U Hpe Thin later went to practice at the newly established center run by the Mahasi Sayadaw and, becoming satisfied with his practice and inspired by the teaching there, U Hpe Thin encouraged the young U Pandita to go along as well. Thus it was that at twenty-nine, U Pandita took up the practice of satipatthana as taught by the Mahasi Sayadaw. He too became inspired by the practice and eager to share this taste of dhamma with relatives, friends, and others. Through his own experience, U Pandita had also become firmly convinced that textual study of the Buddha’s teachings needed to be complemented by practical application of meditation practice.

On the strength of this realization, when he was thirty-four, U Pandita left his post teaching Pali textual studies to take up the duties assigned to him by the Mahasi Sayadaw. He guided yogis for over three decades at the Rangoon center, including many of the Burmese monks would who go on to become leading teachers of the Mahasi method in their own right. In addition, a handful of young Westerners such as Alan Clements and Steven Smith came to the center in the early 1980s and practiced under the guidance of U Pandita. It was in large part on the strength of the recommendation of these young Westerners that U Pandita was invited to IMS in 1984 to conduct that historic retreat, which would prove to be a major watershed in the training of Western teachers of mindfulness meditation.

In 1979, at age fifty-seven, U Pandita was appointed as a guiding Nayaka teacher at the Mahasi center and with the passing of the Mahasi Sayadaw in 1982 was appointed to the lead role of Ovadacariya at the center. He served in that role for eight years, then left to found the Panditarama Shwe Taung Gon Center. The new center flourished, and many branch centers were eventually established under his guidance in Burma and around the world. In addition to training many thousands of meditators in his precise, rigorous style of practice, U Pandita dedicated himself to the training of female Anagarika nuns from Nepal, Burma, the United States, and elsewhere, in both textual study and meditative practice to the highest standards. The immense potential of this contribution to the strength of the Buddha’s teachings in the West is only beginning to be felt.

While his mastery of meditation practice is widely recognized, it is less emphasized in the West how U Pandita embodied and insisted on the purity of one’s morality as a foundational and essential means of avoiding suffering for oneself and others. One Burmese monk, now an elder, recalls that when he lived as a young novice under U Pandita, the novices did not dare to so much as look at the nuns, much less chat with them. Yet this strict observance of sila, which U Pandita held himself to as well, was motivated by a compassionate understanding of the suffering that can follow from a failure to do so. As the American teacher Michele McDonald relates, it was the great strength of U Pandita’s sila that made her feel safe enough to trust him as a guide through very difficult aspects of practice.

U Pandita embodied and insisted on the purity of one’s morality as a foundational and essential means of avoiding suffering for oneself and others.

For all his many personal strengths, U Pandita tried to include in his teaching as little of himself as possible. American nun and longtime student Daw Vajiranani recalls U Pandita telling her that the Buddha’s teachings recorded in the Pali texts should be given first priority, next the commentaries, and after that the lineage of teachers down to the present; one’s own views and innovations should carry the least weight. For this reason, U Pandita emphasized that in order to guide others skillfully, a meditation teacher needs careful study of the Pali texts, just as textual study must also be completed by practical application of these teachings in meditative practice. Throughout his own teaching career, U Pandita never forgot his great debt to his own teacher, the Mahasi Sayadaw. And he emphasized Mahasi’s immense contribution in making clear how the Pali suttas, beginning from the Buddha’s first teaching in the Dhammacakkapavattana Sutta, offer precise practical guidance for meditation practice.

Sayadaw U Pandita will be remembered as embodying the aspiration to pass on, intact, the purity of the lineage of teaching from the Buddha that he had received. His remarkable energy for this kind of service made him one of the foremost meditation masters of our time and kept him traveling widely and giving daily talks until his final weeks this spring. His passing truly represents the end of an era.

Jake Davis studied and practiced under the guidance of Sayadaw U Pandita for nearly a decade, both as a layperson and as a monk. He currently teaches at Brown University and with Vipassana Hawaii.