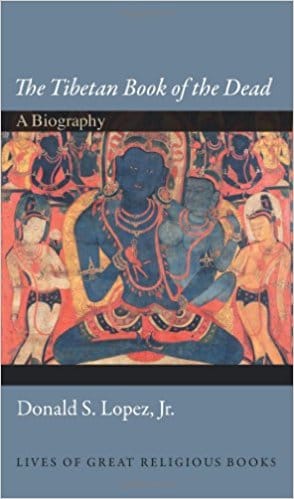 The search for extraterrestrial life has come up empty so far, but the publishing industry—perhaps compensating for its own sense of mortality—seems intent on finding new forms of sentience right here on earth. Or so one might conclude, watching the proliferation of book titles that extend the notion of “a life”  well beyond traditional bounds. First, there was Jack Miles’  God: A Biography, a fair enough title given that God is a “person” in Christian theology. In relatively short order, there followed a biography of a place, Jerusalem; a language, English; and a disease, cancer. Now, Princeton University Press has initiated a series called “Lives of Great Religious Books,” which promises to provide short, accessible accounts of the context, creation, reception, and interpretation of such religious classics as Augustine’s Confessions, the Bhagavad Gita, the Book of Mormon, Rumi’s Masnavi, the I Ching, and the Dead Sea Scrolls.

The only Tibetan text selected for inclusion in the series is the so-called Tibetan Book of the Dead, whose usual title, Bardo Thödol (Bar do thos grol), means “Liberation Through Hearing While in the Intermediate State.” In certain respects, this is a curious choice, given that the text that has been translated and published multiple times under that name is relatively obscure in Tibet, where it is just one of many tantric meditative manuals said to be among the termas, or treasure texts, hidden by the great eighth-century master Padmasambhava, and is far from the most important of the countless Tibetan texts that focus on death, the intermediate state (bardo), and/or rebirth. Indeed, were one to nominate from among Tibetan texts an influential religious classic on the order of others included in the Princeton series, a far better case could be made for Sakya Pandita’s Well-Spoken Advice, Longchenpa’s Kindly Bent to Ease Us, Tsongkhapa’s Great Exposition of the Stages of the Path, or—above all—Tsangnyön Heruka’s Life of Milarepa.

Such criticism, however, largely misses the point, because the focus of Donald Lopez’s ingenious, informative, and engagingly written “biography”  is not so much the original Tibetan text but the pioneering edition and translation first issued in 1927 by the American traveler, scholar, and Theosophist W.Y. Evans-Wentz. In this sense, Lopez is less concerned with the Bardo Thödol than with The Tibetan Book of the Dead, which he describes as “not really Tibetan,” “not really a book,” and “not really about death.” Rather, he says, it “is American, a product of American Spiritualism,” and “a remarkable case of what happens when American  Spiritualism goes abroad.” Thus, like much (though far from all) of Lopez’s scholarship, this book is as much about Western perceptions of Tibet as it is about Tibet itself, and may tell us more about American religion and culture than Tibetan.

Indeed, the frame Lopez uses for his account is American, not Tibetan. His introduction focuses on the Book of the Dead’s role as a “timeless world spiritual classic” that gained popular currency because of its relation to “two domains of enduring fascination” for Westerners in general and Americans in particular—Tibet and death. Chapter 1, appropriately titled “America,” begins with Joseph Smith’s discovery of the Book of Mormon in upstate New York in 1823, and traces a skein through nineteenth-century American Spiritualism that leads eventually to Henry Steele Olcott, Helena Petrovna Blavatsky, and the Theosophical Society, whose teachings of a vaguely Indic religion behind all religions, preserved and telepathically transmitted by hidden masters beyond the Himalayas, attracted a young dreamer and adventurer from New Jersey named Walter Wentz (1878–1965).

Wentz studied religion and folklore in America and Europe, along the way writing a Theosophy-tinged book on Celtic “fairy faith” and adding his mother’s name to his own, becoming Walter Evans-Wentz. After completing his education, he began a world tour that, in 1917, brought him to Sri Lanka and India, and eventually to the Himalayan hill stations. In 1919, in Darjeeling, Evans-Wentz, an enthusiastic collector of texts in Asian languages he would never learn, purchased a bundle of Tibetan blockprints from an English army officer who had spent time in Tibet. Among these were portions of a text titled Peaceful and Wrathful Deities: Natural Liberation Through [Recognition of] Natural Intention, attributed to a fourteenth-century treasure revealer, or tertön, named Karma Lingpa.

Before it came into Evans-Wentz’s hands, Karma Lingpa’s text had its own, curious pilgrimage. It was one of a number of termas related to funerary practices revealed by Karma Lingpa who attributed them—in line with tradition that was well established by that time—to the great founding figure of Tibetan Buddhism, and patron guru of the Nyingma school, Padamasambhava. Karma Lingpa himself did not live to organize or expound his findings, apparently poisoned soon after their discovery by a disgruntled ex-consort. His son and his son’s disciple then began organizing (and likely adding to) his corpus of works, a task that was taken up again in the fifteenth century by Gyarawa and in the late seventeenth century by Rigzin Nyima Drakpa. The latter organized the Karma Lingpa material into a sequence of seventeen chapters that moved chronologically through the stages of death, intermediate state, and rebirth. It was Nyima Drakpa’s edition of Karma Lingpa’s texts that was purchased by the English officer and sold to Evans-Wentz.

Evans-Wentz took his collection of texts to an English-speaking schoolmaster in Sikkim, Kazi Dawa Samdup. Meeting before school each day for two months, the two produced the raw material that eventually would form the heart of The Tibetan Book of the Dead (as well as Tibetan Yoga and Secret Doctrines and The Tibetan Book of the Great Liberation). Of the seventeen chapters of Nyima Drakpa’s edition of the Karma Lingpa corpus, only three were selected for translation—hence Lopez’s observation that the Book of the Dead is “not really a book.” What’s more, two of the three texts selected are not intended for post-mortem ritual but as instructions for advanced tantric techniques to be practiced while still alive—hence the assertion that the book is “not really about death.”

That the Book of the Dead is “not really Tibetan” would only become evident after its publication in 1927. However, given the paucity of translations from Tibetan available at the time, few readers could have been aware of that fact. In the first edition, the translation was preceded by a foreword by the English scholar of Indian tantra, Sir John Woodroffe, and a preface, a lengthy introduction, and extensive footnotes by Evans-Wentz, which situate the Bardo Thödol more in terms of Theosophy, Neo-Vedantin philosophy, and various occult mystery schools than as part of Tibetan tradition. Indeed, although Evans-Wentz contended that he had received Tibetan initiations from Dawa Samdup, the Tibetan traditions invoked sound suspiciously like Theosophy—for instance, the assertion that sophisticated Tibetans propound an evolutionary rather than a cyclical view of rebirth; in other words, you can’t go down, only up. Lopez does credit Evans-Wentz with being one of the first Westerners to work with, and acknowledge, a Tibetan collaborator, but adds that he was nevertheless “a kind of colonizer” who was “compelled to represent his own eccentric interpretation of a Tibetan text as originating not from him, but from his Tibetan teacher.” In this sense, Evans-Wentz was, like Joseph Smith, an American tertön, “a kind of embodied ghostwriter.”

If the Tibetan material was partly overshadowed by Woodroffe’s foreword and Evans-Wentz’s glosses in the first edition, it was very nearly eclipsed in the subsequent editions, which appeared in 1949, 1957, and 1960. Although the first edition material remained intact, new front matter was added each time, so that eventually there were further prefaces by Evans-Wentz and contributions by the Swiss psychologist Carl Gustav Jung and the German-born Tibet enthusiast Lama Anagarika Govinda. Like Evans-Wentz, these commentators tended to read the Bardo Thödol translation by their own lights. In the process, the Book of the Dead became less and less Tibetan, though in its way it had, like the Book of Mormon, become a kind of American terma, “unearthed” by Evans-Wentz, attributed to past sages, and altered over time, much as Karma Lingpa’s own texts had been.

The Tibetan Book of the Dead had a remarkable impact on Western culture. It helped shape Occidental perceptions of Tibetan Buddhism for decades, and made its way into Beatles songs (“Tomorrow Never Knows”), LSD guidebooks (by Timothy Leary and friends), jazz compositions (by John Coltrane and Pharaoh Sanders), movies (Jacob’s Ladder and, more recently, Enter the Void), television shows (Twin Peaks), comic books, and more. It also was cited with approval by pioneering death researchers like Elisabeth Kübler-Ross and Raymond Moody, and spawned later translations by Francesca Fremantle and Chögyam Trungpa, Robert Thurman, and Gyurme Dorje, as well as spinoffs like the bestselling Tibetan Book of Living and Dying, by Sogyal Rinpoche. This book, as Lopez observes, draws not only on Tibetan ideas and practices, but also, as part of its “cosmopolitan eclecticism,” quotes a raft of Western sages and cites as authorities the same Western death researchers who had derived some of their authority from The Tibetan Book of the Dead.

The mystique of Evans-Wentz’s book has been penetrated in recent years. Bryan Cuevas has traced the peregrinations of Karma Lingpa’s opus in The Hidden History of the Tibetan Book of the Dead (2003). Lopez himself has previously explored the place of the translation in Western culture, first in Prisoners of Shangri-La (1997), then in a foreword and afterword to a new edition of The Tibetan Book of the Dead (2000). Nevertheless, Evans-Wentz’s book has indeed become a “timeless world spiritual classic,” whose influence will continue to be felt despite all we now know about its composition and contents. In a final irony that I expect Lopez would appreciate, the publication of this small and intriguing volume may send a new generation of readers to Evans-Wentz’s classic, and we can be certain that at least some of them will forget all Lopez has told them and fall under the spell of The Tibetan Book of the Dead, as generations of readers before them have—assuring that strange and compelling piece of living papyrus yet another fortunate rebirth.