For some Black Buddhists in predominantly white sanghas, certain practices harken back to the history of forced subservience to white people. Melvin Christopher Horton explores his experience in a powerful poem. 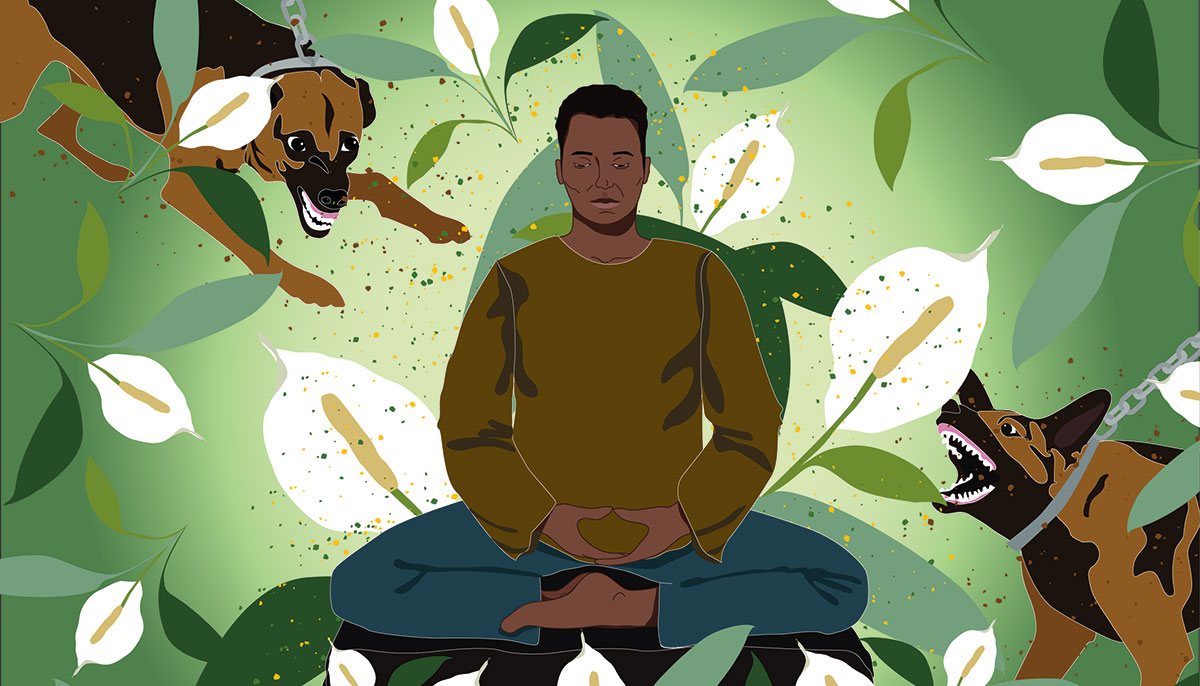 Prostrations of an Angry Black Man

I have the proper amount of respect for the process and the ritual.
And for you and for him.
It’s just a little problematic considering our history.
Our shared history.
And no, I can’t just “get over it.”

I can’t serve food to a random white person in public but I would love to be of service.
I can’t serve.
I can’t bring a white man food.
I’m sorry it doesn’t sit well with me.
I love you but…
Come get it yourself.

I grew up in the 60s and 70s.
I’ve worked many jobs in many cities.
I could never be a waiter.
I am the descendant of recent servants and it is not in my nature to serve food to white people.

Before me there was a long line of people who served and were never paid but beaten.
Never thanked but killed.
Some served by necessity.
Some by duty.
Some by choice.
Some at the tip of a whip or the point of a gun.

I am the one who has been beaten and humiliated by white police officers for years on the street because somehow in their minds I didn’t show them the proper amount of respect for someone of my station and my color.

I watched helplessly as a white man threw a red brick through the window of a tan car with three black children in it.

This hurled piece of brick hit the girl
sitting next to my mom in the back of the head turning that nice woman’s hair from black to red and I shut my five-year-old eyes and prayed to survive the night.

We were black.
The neighbors were not.
And that’s all that needed to be said.
When I was a child.

White men trained “white” dogs to hate people who looked like me.
When I was younger and dogs would bark when I walked by,
I had no idea if they were trained to do that or if it was just their nature.
And I loved dogs.
It made me cry.

My older brother has an irrational fear of man’s best friend.
He once tried to get out of the way of a police dog but bumped into the police man and was severely beaten because in that white man’s mind he hadn’t shown the proper amount of respect.

I remember when my brother told me the story after getting out of the
hospital, he looked me in my eyes, got real serious, and said, “They would’ve killed you.”

And he was right. Because even as they beat him he was still more afraid of the dog, and when they realized it, they began telling the dog to bite him until a grown ass black man cried and pissed his pants, and they laughed.

Everyone who knows me well knows this to be true: Had I been there, they would have had to kill me.

My brother feared “white” dogs even more than white men (with guns) because he grew up in an era where dogs were trained to kill people
who looked like him. Something that still
happens today and it still angers me to tears.

I wanted to apologize because at this present time I still cannot kneel and bow before a white man in a beautifully black or colored robe that has more than earned my legitimate respect.

It took me forever to learn to kneel before a statue of a white Jesus even though it didn’t matter what the skin color of the representation was… it was fucking Jesus.

I couldn’t, when asked to serve a white woman food in front of all the people who had gathered, even though she taught so brilliantly and I had not paid my tuition but I wanted to apologize for that. And I didn’t because I felt the shame. I lied and said I was sick and then I felt more shame for that and then all I felt was your anger.

I can’t explain it but I’m trying to.
It’s an overwhelming feeling inside.
My knees shake.
I can’t kneel.
My heart hurts,
so my back won’t bow.
I feel a discomfort like an anger
misplaced from long ago.
It’s not pride.
Don’t insult me by telling me it’s pride.
I am not proud of it.

But if you put an adult white person in front of me in public, even one who has more than earned my respect…

And I know
It’s not their fault.
They did nothing wrong.
And still I find it difficult to kneel before them with the world watching.
And if you don’t understand why that is, then I don’t know what to tell you.
—Mel

Melvin Christopher Horton is an active member of three Buddhist sanghas in New York City. He’s a writer, a poet, and a long-suffering Mets fan.