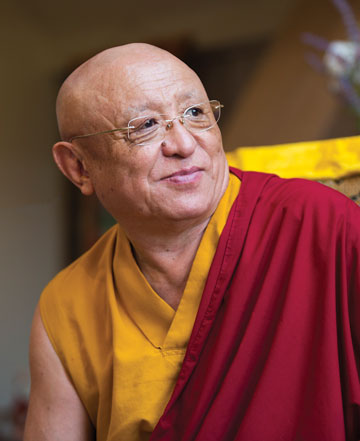 We can’t just blindly meditate, says Chokyi Nyima Rinpoche. Our practice must be illuminated by deep, critical study of the Buddhist teachings.

In the Tibetan tradition, the study of Buddhist philosophy is known as “learning and reflecting on the view.” Through a process of sustained inquiry, we can become free from all doubts about the true nature of reality as described by the Buddhist teachings. We understand the Buddhist view, at least in intellectual terms.

But that alone isn’t enough for us to gain liberation. For that, we need to apply our understanding in practical terms through meditation. We need to follow the advice of Vasubandhu, a great Buddhist master from the fourth century CE, who declared that “a disciplined person who has studied and contemplated is able to practice meditation.”

As Vasubandhu says, our studies must be based on a wholesome, disciplined lifestyle. We need, at the very minimum, to give up the ten unwholesome acts. If we study in such a way, we will have a wholesome support for the meditation practices of tranquility and insight. Then what we have understood through our studies can be put to practical use, so that experience and realization unfold from within.

Such an approach to learning Buddhist philosophy is particularly relevant these days. Across the world, people think differently than they used to. There is much greater access to education and learning than before, and the general sense is that everything is up for review, and everything can be investigated. That goes for religion, as well as for matters of the world.

In general, the contemporary mindset wants to examine and investigate things. To do that, we would do well to utilize the Buddha’s teachings generally, and specifically the treatises on Madhyamaka (Middle Way), epistemology and logic, and the realization of prajnaparamita, transcendent insight.

If we use these precious resources to examine things critically, we can understand both the way things appear and the way they truly are. We can accurately comprehend the Buddhist teachings on the phenomena of the external world and inner mind; the ground, path, and fruition of the dharma. We can correctly understand how all this manifests and appears on the relative levels, and also know what it actually is at the ultimate level.

We can then become free of any doubt and gain confidence. With such confidence, we become inspired and motivated to practice meditation. We will know how to practice correctly, and when we do that, experience and realization will dawn in our being.

In traditional academies in the Tibetan Buddhist tradition, this is called “learning and reflecting on the view.” It really is an academic approach, even in the modern sense, because there are no limitations to what may be questioned. If we feel unhappy with the position of our teacher, or some great teacher of the past, we are free to refute them. As followers of the Buddha, we live by his instruction: “Monks, when you listen to my words, you must examine them carefully, like a skilled goldsmith who tests gold by heating, cutting, and rubbing. Do not accept my words merely out of respect.”

In addition to analysis and study, the Vajrayana tradition includes two other, more direct approaches to realizing the truth of the teachings, making a total of three.

The second approach is called “meditating based on direct instruction.” This becomes an option when the student has trust in the dharma and devotion to the teacher, and the teacher has genuine experience and realization to impart. In that case, there is no need for elaborate studies based on scripture and reasoning. Rather, one focuses on the common preliminaries (four contemplations that shift the mind’s perspective) and the uncommon preliminaries (four spiritual exercises that are practiced one hundred thousand times each).

Having completed this training, one takes up the practice of deity yoga, which leads to realization of the natural state of Mahamudra (The Great Seal) and Dzogchen (The Great Perfection). In order to make this happen, a ready and receptive student will request empowerment, teaching on the tantras, and oral instruction from a master who possesses genuine realization. During this process of transmission, it becomes possible for the student to recognize the true nature of the mind, which is the crucial experience that leads to accomplishment.

Finally, the third approach in Vajrayana Buddhism is referred to as “the transfer of blessings.” When a master with supreme realization is approached by an extremely gifted disciple, sometimes no words are necessary. A mere sign is enough to convey the nature of realization. Sometimes there is no need for any indication at all. Simply the fact that the master’s wisdom mind turns toward the disciple is sufficient. The student recognizes the nature of mind, perfects the strength of that recognition, and gains full stability in it—all at the same time. That is possible, and it has happened to some, but it’s very rare.

These days, the effects of science and scientific thinking are in evidence everywhere, and for many people, science is more trustworthy than religion when it comes to issues such as the nature of matter, time, and space. No matter what our belief system or religious orientation may be, this is a time for analysis and investigation, and the Buddhist tradition has rich resources in that regard. For example, the treatises on Madhyamaka and Buddhist logic teach the analytic method in tremendous detail.

But if our aim is to become free of doubt with respect to the profound truths of samsara, nirvana, and the path, just studying for a short time is not going to be enough. Month after month, year after year, we should embrace the life of a scholar. From early morning till late evening, we should read and analyze the teachings of the Buddha, combined with the commentaries and treatises of the great masters. We should compare the texts we study against each other, and discuss and debate them with our fellow students and scholars.

People appreciate critical analysis these days, and when such analysis leads to freedom from doubt, the result is genuine trust. Then our trust in the teachings and our appreciation for the wisdom they convey becomes very natural and joyful. We become perfectly equipped to put the teachings into practice and gain experience, and as experience unfolds in our minds, the possibility of true realization dawns. That is why it is so important to study and reflect on the view.

Read the rest of the series, “Buddhism’s Next 40 Years: Deepening Our Practice and Study.”