Towering stacks of newspapers, a mountain of clippings — James Kullander feels they might contain some fact that would transform his life. Deep down, though, he knows what would be truly transformative. From the November 2011 issue of Lion’s Roar. 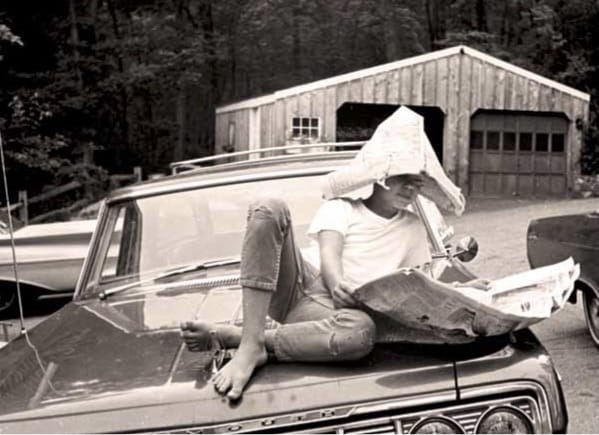 One bright summer day many years ago, I was sitting on the hood of a neighbor’s Plymouth station wagon reading the New York Times. My parents didn’t get the Times, so occasionally I wandered through the woods to our neighbor’s house and read theirs. I went there to visit with my friend, too, a girl my age. Perhaps by reading the newspaper in front of her I would impress her with my worldliness.

I was never all that good at sports and I was painfully shy. The girl, a svelte blonde, was clever at making things with folded paper. While I was reading, she took a section of the Times, made a big newspaper hat out of it, put it on my head, and laughed. I thought it funny, too, and played along. Another friend, who had his own 35mm Nikon and darkroom, snapped a shot of me. In the photo I’ve got the big newspaper hat on my head, and in my hands I’ve got the other section spread open before me as I scan the headlines. On my face I’m wearing a big smile. I’m thirteen years old.

I walk by that photo every day, and it used to make me smile. But recently I’ve looked at it with a sinking sensation as I’ve watched the spate of reality television shows on hoarding, such as Hoarders and Hoarding: Buried Alive, and all the media attention suddenly paid to packrats of all stripes. In the scenes of mindboggling clutter that people have crammed into their homes, I can see my own tilting heaps of newspapers all around me.

We all have our stashes of junk somewhere—in a drawer, a closet, the attic, the basement—but what’s been happening with me over the years is a little more serious. Recently, I went to the big guns, a guide for therapists, to help me. “We buy what we need, sometimes more, and we discard, recycle, give away, or sell what we don’t,” I read in Compulsive Hoarding and Acquiring by Gail Steketee and Randy O. Frost. “But for people who suffer from compulsive hoarding,” the book goes on, “this process is not so easy. For them, possessions never ‘feel’ unneeded or unnecessary, and trying to get rid of them is an excruciating emotional ordeal. For some it is easier to divorce a spouse, sever ties with children, and even risk life and limb.”

Psychologists have come up with all sorts of reasons why people hoard. Some say it’s genetic; some say it’s a form of an obsessive-compulsive disorder; others say it could be related to brain abnormalities or damage. For me, I think it all began with a need to know, although I can’t recall specifically when or how it happened. Perhaps I’d been made a fool of for not knowing the answer to a question. Perhaps I’d lost an argument—or a bet—because I didn’t have the correct information. Mostly what I remember is that I thought that everything I needed to know was in the daily newspaper.

So every day after I got off the school bus, I’d grab the afternoon Bridgeport Post from the mailbox at the end of our driveway and pore over its pages while my friends were still back at school rehearsing a play, practicing in the marching band, or playing sports. I was not embarrassed or ashamed by this. Actually, I was quite proud of myself. None of my friends was reading the newspaper with the attention that I was giving to it. Maybe it made me feel grown up, a cut above the rest.

Some obsessions we outgrow but I did not outgrow this one. I could never keep in my head everything I felt I needed or wanted to know, and this is perhaps where my need to know soured into an obsession. I’d started clipping in my teens, filing the clippings in folders arranged by topic and stashing the folders in tall, gray file cabinets, and long after I had plunged myself into Buddhism, which teaches about the emotional pain of clinging to old habits, I continued to pile newspapers around me to protect a fragile sense of self that felt threatened without them. Wherever I moved, those file cabinets and stacks of newspapers came with me, growing like stalagmites in every room in every apartment and house I lived in. Over the years, I’ve found myself becoming embarrassed by them. Once, I was even reluctant to let a plumber into my house to fix a broken pipe for fear of what he would think of me.

Everyone I tell about my situation gives me the same admonition: Get rid of the newspapers. You can find everything online now. Move on. Make space in your life for something new. Some Buddhist you are, they taunt me. I laugh, and shrug it off. But deep inside, the confusion is acute. Over the years I’ve made some small attempts to clean up and put a stack of yellowing copies of the Wall Street Journal or New York Times out on the curb for recycling. But as I’m doing it, I am convinced— and dread mightily—that in the stack I’m turning my back on there’s something I need to know, and now will never know. Some bit of knowledge or fact that will transform my life.

At the same time, I know that what would really transform my life would be to get rid of the newspapers. I have canceled all my newspaper and magazine subscriptions, and recently had a friend over to help jump-start the arduous cleaning-out process. We ended the day with a whopping thirty-nine grocery bags (which I had been saving, of course) stuffed with newspapers deposited on the curb outside my house for recycling. I even found a New York Times clipping titled, “Clutter Counseling: Just Say Throw.” The date of the clipping: November 9, 1995.

I try to concentrate on the basic Buddhist teachings contained in the four noble truths I learned years ago: there is suffering in life, we suffer to the degree we crave and cling, there is an antidote to this clinging, and it is an eight-fold path that shows us how to live with moderation. To me, this moderation looks like a house where I don’t have to navigate my way through the heaps of newspapers, where friends can sit down at my kitchen table and enjoy a meal together. Not rocket science, yet for me difficult to put into practice.

I know by now that no amount of knowledge is going to change my life. “Wisdom is the only thing that saves people from suffering, finally,” the Buddhist scholar Robert Thurman said at a recent talk I attended. When I heard those words I thought back to my house a few miles away, silently groaning in the night like someone who’s eaten way too much. Buddhism teaches us that the greatest mind is a mind that lets go and the greatest wisdom comes from seeing through appearances.

I was reminded of a Zen story about two monks returning to their monastery one evening. It had rained, and a beautiful young woman was standing on the path, unable to go on because of a big puddle blocking her way. The elder of the two monks lifted her up in his arms, carried her across the puddle, and continued on his way.

That evening the younger monk came up to the elder monk and said, “Sir, as monks, we cannot touch a woman, right?”

Then the younger monk asked, “But then, sir, how is that you lifted that woman on the road?”

The elder monk smiled at him and said, “I left her on the side of the road, but you are still carrying her.”