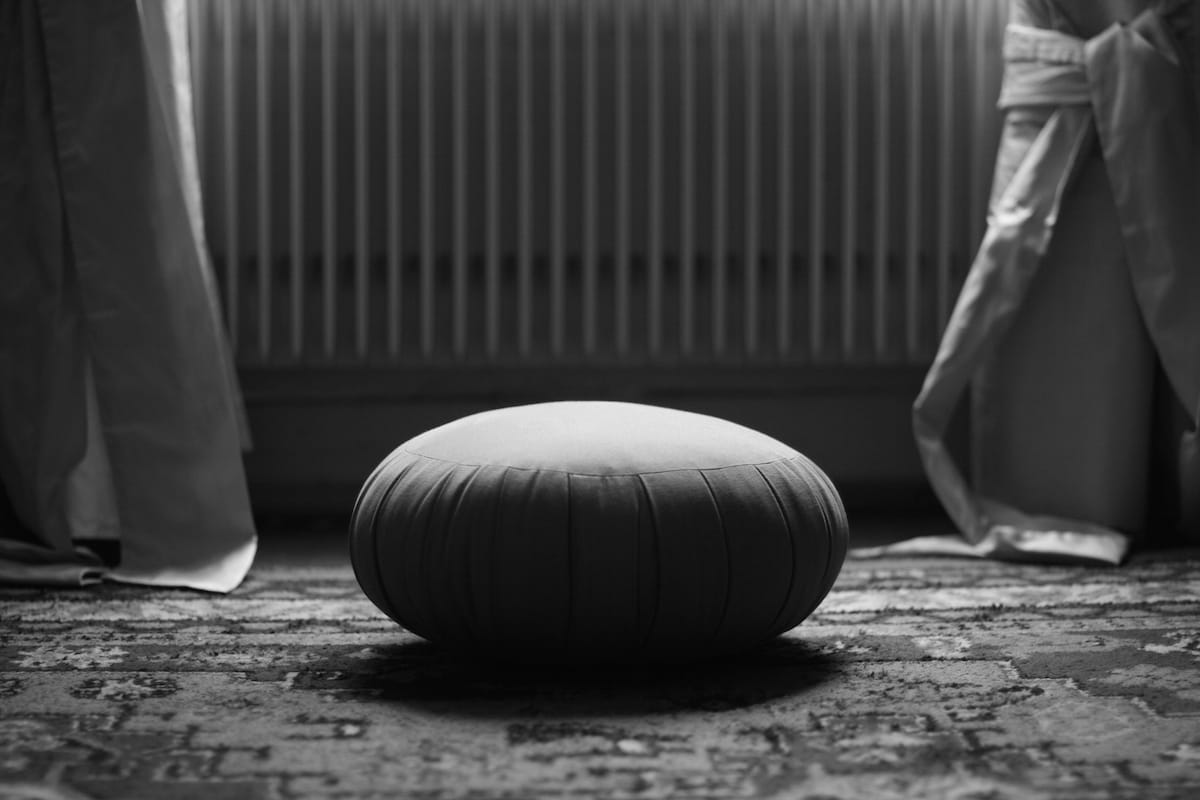 Our natural mind is clear, simple, and ordinary. The practice of Zen meditation, says Susan Murphy, is simply to abandon anything extra. Then the ordinary reveals its magic.

First, what Zen meditation is not. It is not a meticulous body scan, nor a rigorous examination of the contents of the mind. Nor is it a private entry into nirvana.

Zazen is a deep study of the embodied mind. It is a meditation practice that fosters both gradual and sudden shifts of radical insight into the genuine nature of mind. In a typically startling yet low-key undoing of expectations, Zen often calls this clear and most natural experience “ordinary mind.” In zazen, “ordinary” things grow both plainer and stranger at once.

This “ordinary” does not mean ho-hum or customary. It means as ordinary as the way a bee softly bothers the flowers. As ordinary as waves welling and sucking back over rocks. As ordinary and unlikely as the overwhelming fact of the universe, of breathing in and out, of having a boundless consciousness that seems also to have a name and history and a mortal body. Ordinary means to be with what is, freely moving with unfolding circumstances and at rest everywhere, like a leaf in the breeze.

Zazen (literally, “seated meditation”) is a focused investigation of the nature of “self.” But as the great Zen philosopher Dogen put it, to study the self is to forget the self. All fixed ideas and sense of “self” become “forgotten”—in other words, softened, dissolved, dropped away, expanded to include all that is.

This is done not by directing yourself toward something special but by subtly abandoning anything that resists the simplicity of just being, just sitting, just breathing. It begins in grounding the mind deep in the body and breath, just as they are.

Simple? Yes. And yet it takes all that we are, and many years of practice, to truly experience and maintain.

Zazen means only sitting. It means dropping away anything extra to your breathing, the air on your face, the weight of your body, the subtle energy in your hands, the intimate sounds of lungs, heart, and belly, the sudden cry of a bird, the coming and the going of thoughts and half thoughts, feelings and sensations. None require anything beyond your steady, unpresuming attention.

Wonderfully, there are no steps, guidelines, bullet points or blueprints for this state of resting the mind in what is. I love the way Zen’s generous but challenging gift to us stays almost completely silent on method—as silent as the mind free of constructs and narratives of self. Instead, zazen honors direct, ordinary experience, moment by moment, as the path itself.

I am delighted to learn that in Botswana some train crossings bear a sign saying “WARNING: Trains may be hiding trains!” Well, be warned (and reassured): the method of Zazen is hidden (and revealed) entirely in the activity. It will reveal to you the birdsong hiding in the birdsong, mountains hiding in mountains, trains hiding in trains, the self hiding in the self.

How to Do Zazen

Settle into stillness with an upright spine and a slight curve at the base of the spine, assisted by a cushion that subtly tilts the pelvis and establishes a firm base that is free of strain.

Upright and self-supported, head erect but chin slightly tucked in to draw the weight of your head off your neck and spine, you begin to focus on every part of each breath.

You are asked to favor a gentle persistence—not so much controlling the mind as letting thought soften. At the same time, maintain a foreground awareness of the whole body breathing, hearing, feeling, resting. Any unbidden sounds, sensations, emotions, and half thoughts passing through are taken to be just right and just enough. In each moment you offer “just what is” your complete confidence, and rest your mind in that.

There’s no need to fear failure. As the contemporary Chan master Sheng-yen said, “If you have never failed, you have never tried.” When straining for something falls away, what is more natural can appear and success and failure no longer trouble you. “Natural” means closer already to your true nature.

As self-consciousness begins to soften its grip, you intimately encounter, breath by breath, a sense of who you really are. In that heartfelt awareness of body, breath, and mind, you become more seamlessly breath-body-mind. Slowly the mind darkens from thoughts into a state of “not-knowing.” When that grows deeper, some utterly ordinary sound or sight or touch can abruptly escape the clutch of conceptual mind and reveal its self-nature in a way that wondrously confirms your own original nature. Dogen called this the falling away of body and mind in realization. In becoming real.

A sudden birdcall, a twig snapping, a flame flickering, a shadow melting in grass, the crunch of an apple in the mouth, the ridiculous beauty of a crushed beer can found on a beach—any ordinary blessed thing can bring the entire universe to light as your self, clean as a whistle, with nothing that can possibly be attached to it.

This “confirming of the self” is an unbidden coup de grace, a gift that can reach the ground of mind made receptive by freeing itself again and again from “supposing” anything in advance or adding anything in excess of this one breath-mind moment.

This receptivity is an act of yielding the self to the completeness of each moment. Even if the particular moment is difficult, when it is received complete we are able to die to one moment and be born fresh to the next, with our sense of curiosity and appreciation intact, free from the crippling mind of “better” and “worse.”

Zazen is a disciplined act of conceding full agreement with what is. With this comes the dropping away of the kind of “knowing” implicit in anticipation and disapproval, and Zazen begins to open as a pure question.

What is the provenance of this breath? What is it? Who is breathing? Where on Earth did this mystery of being here and breathing come from? And where does it go when we are gone?

To sit Zazen is not to sit in the presence of big existential questions. It is to sit as these questions. In place of an assured goal or method, or the promise of final answers, Zazen practice offers radical uncertainty that is alive with something bigger, more generous, more promising.

As the late Robert Aitken Roshi put it, Zen is dedicated not to clearing up the mystery but to making the mystery clear. Whales, blue wrens, cries in the dark, the sudden fall of a heavy camellia—each thing steps forward to let us know how mysterious this being here really is. As Emily Dickinson said, “Life is so astonishing, it leaves very little time for anything else!”

So how do you offer yourself to such intimate inhabiting of this very moment of life? The poised alert state of Zazen presumes nothing; with a simple, ruthless kindliness, it just avoids inattentiveness and preferences.

When you choose not to object to what’s going on, the lovely thing is that it has a much harder time becoming objectionable. And when you persistently drop each arising impulse to control or engineer things for ever-improved “outcomes,” you can discover the peculiar contentment, low-lit and wondrously “ordinary” inside the subtle action of the mind of not-doing.

Susan Murphy Roshi is the founding teacher of Zen Open Circle in Sydney, Australia. She is the author of Upside Down Zen and Minding the Earth, Mending the World.