Editor Koun Franz introduces the 20th anniversary issue of Buddhadharma: The Practitioner’s Guide, which looks back at where Western Buddhism has been, and what might lie ahead. 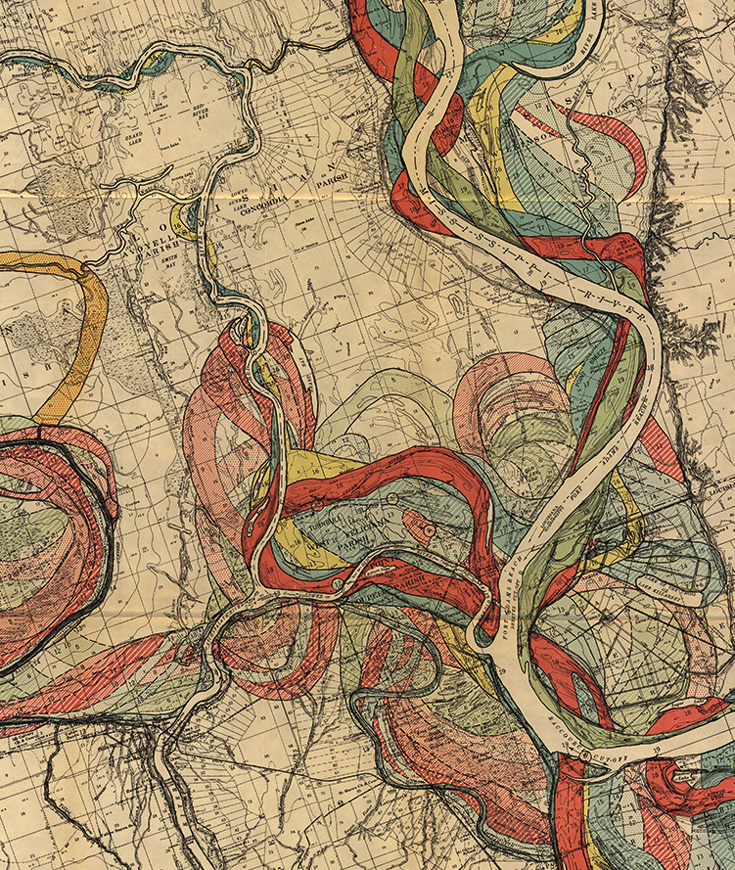 Detail of “Geological Investigation of the Alluvial Valley of the Lower Mississippi River,” 1944. By Harold Fisk. United States Army Corps of Engineers.

This twentieth-anniversary issue of Buddhadharma is about time. Specifically, it’s about this moment in time and the recognition that Buddhism is, and always has been, in motion.

I once saw a series of maps drawn in 1944 by Harold Fisk, a US Army Corps of Engineers cartographer, that illustrated the many changes in the course of the Mississippi River over tens of thousands of years. The maps are multicolored to show each course; layer after layer of twists and turns intersect with the current course of the river but also stretch far to each side of it, exploring and then abandoning areas the river of today can no longer touch. The images are beautiful and overwhelming, too much for the mind to hold. On the surface, they show the past, but what they really do is demonstrate how the present is part of a continuum—ten thousand years from now, today’s river will be just another line of color.

In June of this year, leaders and practitioners from across the United States gathered at the Garrison Institute and online for a conference on the “Future of Buddhism.” A collaboration between the Lenz Foundation and Naropa University, the conference brought practitioners from across lineages, generations, and backgrounds to explore both the challenges facing Buddhism today and the opportunities it might embrace going forward.

This twentieth-anniversary issue of Buddhadharma takes up some of those same questions. It opens with a look back by Barbara O’Brien at the last twenty years in Western Buddhism—on one hand, just the blink of an eye, and on the other, two of the most exciting and volatile decades in Buddhism’s history. From there, you’ll find five conversations around issues that matter, and will continue to matter: tradition, power, engagement, plurality, and the role of the dharma in meeting the climate crisis. Each section opens with a talk from the Future of Buddhism conference, followed by material from past issues of Buddhadharma that brings further depth to these dialogues.

This is not a “best-of” issue. Rather, it is a snapshot of the river of Western Buddhism right now. It is a look at where these conversations are and a hint of where they might be headed, a combination of teaching and commentary, groundedness and possibility. If you’ve been a reader of Buddhadharma for twenty years, then it may feel like a reminder of how far we’ve come. I hope so. But more than that, I hope it will feel like a dip of your toes into this powerful current of our practice, of our shared history as practitioners.

We’re here for just a moment. Let’s get our feet wet.