Karen Maezen Miller gives us tools to engage with our fellow Facebookers in ways that benefit us all. 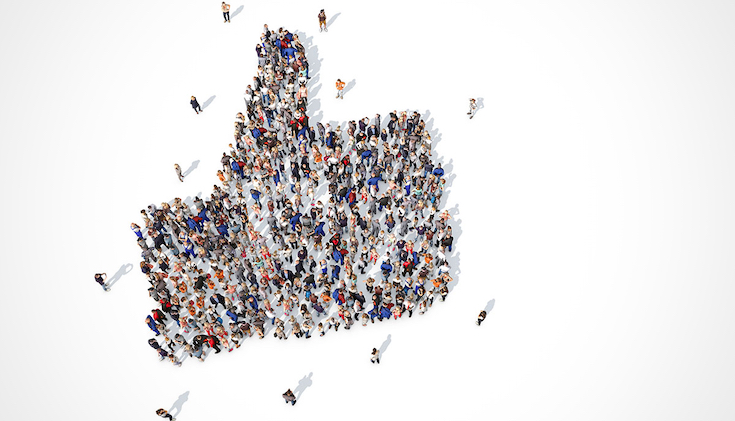 There’s a question that’s being debated a lot these days—do we as Buddhists have a moral duty to quit Facebook or is it possible to practice right conduct in the middle of a fake news feed?

Two years ago, I thought I knew the answer. Blindsided by the outcome of the 2016 U.S. presidential election, I suddenly saw this once mundane timewaster as an evil menace. Facebook magnified our delusions, I thought indignantly, while propagating the lies and hate that eroded our social fabric and threatened democracy. The stakes were high and my verdict was swift.

“Get off Facebook. Permanently,” I wrote on Facebook before sanctimoniously shutting down my account. The world was aflame in a digital war, and I believed that the only conscientious thing to do was object. It didn’t help matters that the other side seemed to be winning.

I had to admit that I was partly responsible for my disillusionment. Because I was anxious over the pending election, I had hidden posts from vocal friends whose opinions differed from mine. It was upsetting to find out how wrong people were! Although I could blame nefarious forces for manipulating our collective consciousness, I, too, had created a fantasy world by distorting reality with my self-serving deceptions. After all, you can’t be blindsided if you’re not wearing blinders.

Our path requires us to be selfless in what we say, do, and share. That’s a tall order for anyone, but especially on Facebook.

These days, the philosophical dilemma over Facebook is even more pitched. The company’s problems with privacy and propaganda should concern every user. It might be time to call it quits. Nevertheless, within six months of leaving Facebook, I was back, and for one reason: people. Facebook is full of folks with whom I want to connect, and I can’t seem to reach them any other way. Today, the question for me is not how I can put up with Facebook but how I can put Facebook to better use. To a practitioner, every question of “how” is answered by the eightfold path.

Right speech, right conduct, and right livelihood comprise the moral and ethical components of the eightfold path, but before you get to them you have to master “right view.” What view of Buddhist ethics is “right”? It’s not the kind of right that is the opposite of wrong. Right view blows through the dualistic notions of right versus wrong and us versus them, because it is grounded in selflessness. If your behavior isn’t free of a self-serving agenda—no matter how high-minded you think it is—the traces of your greed, anger, and ignorance will cause harm.

Our path requires us to be selfless in what we say, do, and share. That’s a tall order for anyone, but especially on Facebook, where every other person seems as if they are begging to be set straight. So when I logged back on, I vowed to keep it simple, following these five modest, yet potentially far-reaching ways to make the world better through Facebook.

Those who ask probably don’t need it and those who don’t ask don’t want it. Give encouragement instead.

Small acts of kindness aren’t small. This is your chance to cultivate empathetic joy.

This includes the privacy of your kids, elderly parents, and extended family members. Don’t let them suffer the indignity of your rage, pride, worry, or imprudence. Before you post a picture or story about anyone in your family, ask yourself if you are exploiting their image for your own short-term emotional benefit. Then don’t.

5. Offer what you need to see yourself.

Share words and pictures that support, guide, calm, and uplift you. I find that great poets, clever humorists, ancestral teachers, and innumerable past presidents have said exactly what I need to hear to revive my hope for a better day.

It’s hard to curb our argumentative impulses, but we can find inspiration from the last image in Zen’s famed ten ox-herding pictures, drawn by a twelfth-century Chinese master to represent the stages of Buddhist practice. In the final picture, the mature practitioner returns to the marketplace. He is bare chested and carrying a jug of wine. By the wide smile on his face, you can guess that he has more than a few jokes up his sleeve. He’s liberated himself from spiritual striving, and there’s no trace of pretense or piety in his presence. He delights in the company of friends, the antics of children, and the affection of animals. No place in the world is off-limits.

A bodhisattva, or enlightened being, doesn’t change the world by leaving the world, but by entering it. We can thank Facebook for giving us the training ground to act enlightened—especially when we’re not.