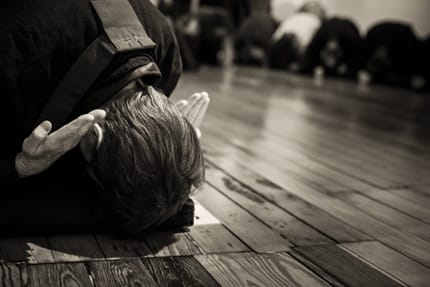 Nearly eight hundred years ago, the celebrated Japanese Zen master Dogen gave a remarkable sermon revealing his egalitarian attitude toward women, an attitude reflected in both his teachings and writings. With the publication of Receiving the Marrow, a collection of essays edited by Eido Frances Carney, eleven accomplished Zen women priests share their understanding of Dogen’s teachings, as well as their appreciation.

In her introduction, Carney, the founding abbess and teacher at the Olympia Zen Center in Washington, lauds Soto Zen’s “egalitarian founder” for setting “the stage for women to come forward and stand as equals in a clerical world that had rejected them as full members of the institution.” Indeed, from his first monastery in Kyoto to his years at Eiheiji temple in the remote mountains, evidence suggests Dogen supported both nuns and female lay practitioners. This favorable attitude toward women is most evident in Dogen’s ser­mon Raihaitokuzui (Receiving the Mar­row and Bowing), from which this new book takes its title.

In the sermon, Dogen suggests that if a monk recognizes an awakened female teacher and bows to her in homage, he demonstrates his “excellence as a stu­dent.” Here Dogen also recalls how two Chinese nuns, Moshan and Miaoxin, otherwise little known in Zen lore, taught a number of male monastics and outsmarted them in Zen dialogues.

What caused Dogen to take such a bold stance in medieval Japan, a time when the role of women was suppressed both inside and outside Buddhist tem­ples? One rationale suggests he had observed a more open-minded approach toward women in mainland China and wished to foster the same in his own movement. Another possibility is that like other teachers in the new wave of Japanese Buddhist schools (including Nichiren, Shinran, and Eizon), Dogen wanted to appeal to a wider audience. A third explanation holds that Dogen, who had renounced his aristocratic background to pursue the dharma, remained committed to the doctrine of nonduality in all of its manifestations. This included supporting gender equal­ity and resisting any tendency to demean or marginalize any demographic group.

In Receiving the Marrow, the female contributors interpret the Shobogenzo (Treasury of the True Dharma-Eye), Dogen’s main body of writing, which consists of sermons delivered during the peak his career, including Raihaitokuzui. The contributors, all priests from vari­ous Soto Zen lineages, were born and trained in the West, although several also practiced for a time in Japan. The lineages they represent include those of prominent Japanese masters who taught in America, such as Shunryu Suzuki, Dainin Katagiri, Taizen Maezumi, and Shohaku Okumura, as well as those of their American students, including Mel Weitsman and Bernie Glassman.

Each contributor selects one fascicle and analyzes its key passages both in terms of its dharmic significance and looking at how it can be understood in today’s world. They worked with a variety of Dogen translations, including those by Carl Bielefeldt, Hee-Jin Kim, Herbert Nearman, and Kazuaki Tana­hashi. Rather than making for incon­sistency, the various translations show how widely Dogen’s writings have been disseminated in the past few decades and also reveal the growing contribution of women translators and commenta­tors. One, Shotai de la Rosa, is currently translating into Spanish another crucial Dogen text, the Eihei Koroku (Extensive Record).

The essays are not strictly about women; rather, they are by women. As Carney observes, the collection is not “a feminist treatise”; yet the book does, indeed, tell the story of female Soto priests, who, by following Dogen’s teachings, find their rightful place in the community of Buddhist teachers.

Aside from the introduction, only two essays directly address the role of women in Dogen’s teachings, one by Grace Schireson on Rahaitokuzui and another by Shosan Austin on the fascicle Shinjin­gakudo (Body and Mind Study the Way). Schireson looks at how Dogen asserted the authenticity of female practitioners and championed the ultimate equality of male and female perspectives and under­standing of the dharma. Austin, on the other hand, highlights the differences between male and female counterparts:

Equality does not mean sameness, she suggests; men and women may need to be treated differently when it comes to sitting practice, even if the experience of awakening knows no such differences.

Most of the essays in this volume seek to capture and convey the distinc­tive flavor of Dogen’s incessant word­play, full of psychological irony and metaphysical contradiction. As Jan Chozen Bays suggests, “Dogen Zenji is at home in this world of apparent oppo­sites. He is a mountain goat at play in the mountain range of paradox, hap­pily leaping from peak to peak, jump­ing across huge chasms of apparent contradictions.” Here, women authors interpret Dogen’s puzzling yet thought-provoking words, as men have before them, by examining the master’s words carefully yet creatively. This interpre­tive process follows Dogen’s rhetori­cal twists and turns, phrase by phrase, showing how and why passages make sense or perhaps can be considered nonsensical. Like the Zen koans Dogen frequently discusses, his writings in Shobogenzo transcend ordinary logic and patterns of speech in pursuit of a higher truth.

According to Soto tradition, one must spend at least two decades of dedicated study in order to master the Shobogenzo teachings and be able to confidently say something original about their meaning. As Carney points out, “Since many of our Soto Zen women priests received dharma transmission in the early 1990s, [women] have only recently come into [their] own as teachers.” This volume serves the powerful purpose of enabling female priests to present their own interpretations of Dogen, having now reached the point where they and other women commentators can contribute significantly to making Dogen more comprehensible to the West.

Several of the essays, including Teijo Munnich’s analysis of the fascicle Ben­dowa (Discourse about How to Practice the Way), combine careful readings of the text with particularly insightful interpretations. The Bendowa is the opening section of one of the two main versions of the Shobogenzo (the 95-fas­cicle version as opposed to the 75-fas­cicle one). It deals with the doctrine of jijuyu zanmai (the samadhi of self-enjoyment). Munnich introduces the image of a dancer to illustrate this idea; she talks about the majestic feeling of the dharma dancing through the prac­titioner. In another noteworthy essay, Seisen Saunders considers the ethical ramifications of Shoaku Makusa (Not Doing Evils) by examining the decep­tively simple behavior of a five-year-old child at a local playground. She talks about how the child makes “friend­ship moves” rather than “friendship blocks.”

In another effective essay, Shinshu Roberts explicates the notion of here-and-now reality expressed in the Uji (Being/Time) fascicle. Dogen points out that one cannot ever think that the mis­takes of the past are left behind as we charge toward the future. Because of the unity of past, present, and future, according to Dogen there is no sense of arriving at an illusory endpoint. Rather, there is only an ongoing process of self-cultivation.

Finally, Chozen Bays makes good sense of some of the thorniest writing in Dogen’s world of contradictions. In an essay about the udambara flower, the legendary blossom symbolizing the Bud­dha’s enlightenment, Bays examines the plant species in both ancient and mod­ern times. Her essay is based on the Udonge fascicle.

Despite Dogen’s egalitarian teach­ings, it remains a matter of historical debate whether monks in ancient China or Japan would have ever bowed to their female counterparts to receive the marrow. However, the essays included in this volume demonstrate that what­ever the truth of history, it is high time that men do.