Gesshin Greenwood on what happens when chocolate, peanut butter, and Buddhism collide. 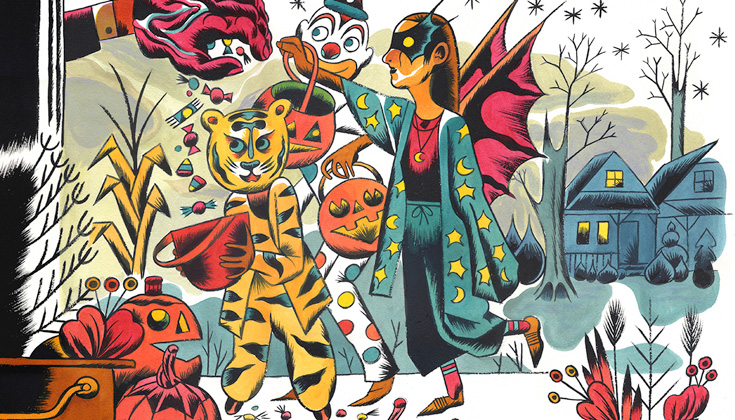 As a feminist, I’m anti-diet and don’t weigh myself. But as a Buddhist, I’m averse to craving and dependency. As Walt Whitman wrote, “I am large. I contain multitudes.”

So when my husband brought up the idea of quitting sugar, I jumped at the chance. I was aware of the medical research surrounding the connection between sugar intake, weight gain, heart disease, and diabetes. Eating sugar causes an insulin spike that makes us crave more food. It was probably best for me not to eat a lot of it.

For the first week we tapered off: eating no desserts, cutting back on flavored creamer, switching from sweetened to unsweetened peanut butter. Then we completely detoxed: no fruit, no tomato sauce, don’t even think about cake. Our plan was to entirely refrain for six weeks, then gradually reintroduce small amounts of sugar. The World Health Organization recommends people eat no more than twenty-five grams of sugar a day (there are five grams of sugar in half a cup of tomato sauce, and twenty grams in one Snickers bar). My goal was eventually to eat this “middle-way amount” of sugar.

After my six weeks was up, I bought a bag of Halloween candy so I could eat a few pieces as an experiment. Returning home from the store, I felt nervous. What if I binged? What if it opened up a portal into a realm of sugar-hungry ghosts?

When I gave my husband his share of the candies, he immediately unwrapped them and popped them straight into his mouth.

I glared. “If this is my only candy for the week, I’m going to savor it,” I told him.

I was the same way as a child. At Halloween I’d always amass a pillowcase full of candy and hoard it for months, like a dragon guarding her treasure. Come springtime, I’d still have candy stashed in a secret hiding spot in my bedroom. Is it modesty or greed to hold on to the things we love and preserve them?

Now, as an adult, I unsealed the wrapper and placed the candy—a Reese’s Peanut Butter Cup—in my hand. I smelled it, taking a long breath in. Immediately my mouth started salivating. I exhaled with frustration. This was going to be hard.

I put the Peanut Butter Cup between my teeth, closed my eyes, and slowly bit down. As soon as the candy hit my tongue I had to will my jaws to slow down. Everything in my mouth was alive with taste, and I felt a surge of pleasure. A voice inside of me screamed “Eat! Eat!” Finally, I could resist no longer and swallowed. But I was barely aware of the taste by then. Instead, a rush of sensation—joy and excitement—coursed through me with such intensity that tears sprang to my eyes. Actual tears!

I unwrapped a second piece. When it went into my mouth, I was aware of how soft it was, how palatable. Something in me urged my mouth not to slow down, not to take heed of what was happening.

“Urge and urge and urge,” Whitman wrote. “Always the procreant urge of the world.” And he’d never even eaten a Milky Way!

Then, just like that, the second candy was gone. Miraculously, I was not sucked into a hell realm of sugar-deprived ghosts, so I managed to eat just two pieces. A few hours later, at work, though, I was snacking more than normal. I poured myself a bowl of Goldfish, and then some nuts. The sugar had, chemically, made my body hungrier, just as the scientists said it would.

The next day I put the bag of Halloween candy on the highest shelf, where I wouldn’t be tempted. But I didn’t really want it. I have plenty of vices—more than I care to admit as a Buddhist priest.