Mushim Patricia Ikeda shares a small piece of Buddhist history that she’s never forgotten, and that she hopes, in this age of ICE raids and the debate about DACA, we’ll always remember too. 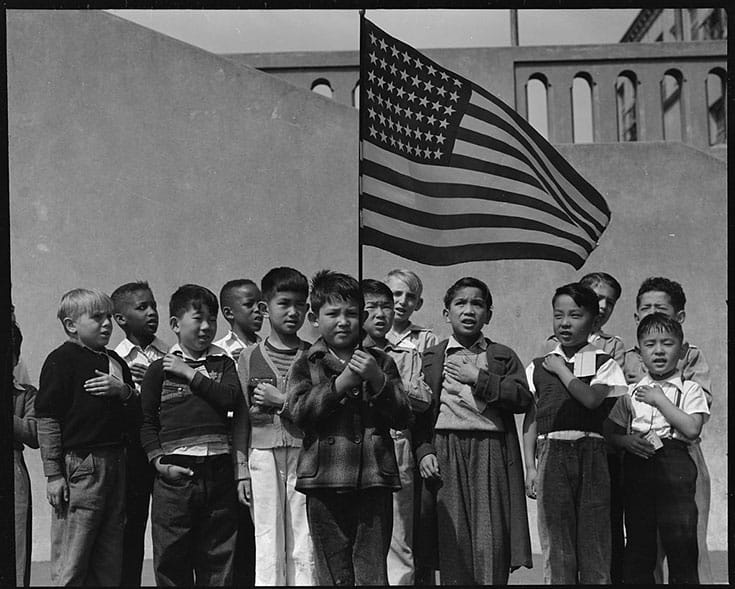 Flag of allegiance pledge at Raphael Weill Public School, San Francisco, by Dorothea Lange, April 20, 1942. Part of a series of photographs taken by Lange for the War Relocation Authority at the Raphael Weill School in San Francisco. In the weeks after Lange captured this image, the U.S. government relocated thousands of Japanese Americans, including every Japanese child in this photograph, to desolate areas east of the Sierra Nevada Mountains. Photo via the National Archives Catalog, Records of the War Relocation Authority, 1941 – 1989.

Here’s a true story that, I think, all U.S. Buddhists should know.

Back in 2000, I was guest editor of the “Buddhists of Asian Descent in the USA” issue of the Buddhist Peace Fellowship’s journal, Turning Wheel. In it was an article titled “Internment Camp Buddhism: Memoirs of Rev. Koetsu Morita,” translated by Rev. Ryuji Tamiya and my cousin, Rev. Mary Jiko Oshima Nakade.

One of the stories in that article goes like this:

Rev. Morita, a Soto Zen priest from Japan, was arrested in Hawaii on December 7, 1941, the day Pearl Harbor was attacked by the Japanese. He was relocated to numerous concentration camps—it’s good to remember that these were concentration camps, not just “internment camps”—starting out in Sand Island, Oahu, Hawaii. In that camp, there were thirty Buddhist ministers of various Buddhist sects from all over the island of Oahu.

When Buddha’s Birthday came around on April 8, Rev. Morita recalled, the ministers wanted to celebrate the traditional Hana Matsuri. Like the other ministers, he had only the clothes he was arrested in, and they were filthy. He had only one pair of pants, so he couldn’t wash them; what would he wear in the meantime?  (Evidently, Rev. Morita wouldn’t get a change of clothing until his family was able to send him more pants, months after his arrest.) He had no belt, either, so he used a piece of rope from a tent on Sand Island.

But no minister had a robe with him except for Bishop Kubokawa [of the Jodo sect], who was asked to officiate because he had been arrested in his robes…. We chanted the Hannya Shingyo (Heart Sutra) and Bishop Kubokawa delivered a Dharma talk. He said, “…Your participation in those filthy clothes can be likened to the Buddha’s teaching of the lotus blooming in the mud. Let us hold on together, praying that peace arrives as soon as possible, and may we be guided by the Buddha’s teachings and life of peace.” To this day I can still hear the voice of that nearly eighty-year-old priest.

So the U.S. government arrested and put into concentration camps Japanese immigrants and U.S. citizens (the children of the immigrants) alike in World War II, including many Buddhists—and Buddhist priests were among the first to be arrested in Hawaii. They’d even arrested a priest in his robes!

As Buddhists in the U.S., I think that if we knew our own history better—that is, the history of Buddhism in the U.S.—we would understand that the ICE raids (which were going on in full force during the Obama-era) and the repeal of DACA have very, very much to do with our own dharma practice. And, because of that knowledge, we would resist—employing all of the determination and concentration we have developed through our various Buddhist practices.

And then there’s the equally valuable community-building skills that Buddhists in this country have carefully nurtured in order to provide safe and happy and welcoming places for ourselves, our families, and our dharma friends. When we foster and share these skills, we increase our resilience.

We’ll need our determination, concentration, and resilience. Because this trying era we’re in will end someday, but it’s not likely to get better very soon. We’ve got to be in this for the long haul.