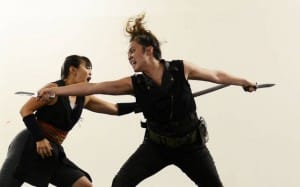 But how about if you suddenly found yourself in a post-apocalyptic wastescape liberally populated with malevolent zombies and cannibals who…blast it! Know kung-fu! How about those precepts then, huh?

Such is the dilemma for Sika, the “lead zombie hunter” in Saymoukda Vongsay’s “Kung Fu Zombies vs. Cannibals” a new, undead-infested, carefully choreographed chop-and-kick stage show blasted through with a live, original hip-hop soundtrack and… Buddhist morality at its core.

Each of the play’s five scenes is based on one of the Buddhist precepts. Vongsay, a Lao American poet and English major, whose day job is community outreach coordinator for the University of Minnesota’s Asian American studies program, explains the device in a Minnesota Daily preview:

“How do you survive in a post-apocalyptic world where you can’t lie to get yourself out of situations that are harmful to you or take things that didn’t belong to you, but that you need to survive? What happens to your moral standards?”

“Kung Fu Zombies vs. Cannibals” has been energetically…um…brought to life by Mu Performing Arts, “the only pan-Asian theater company in Minnesota,” whose name suggests a well-known Zen story. The show also promises a “gang banger-turned-monk” character, and includes a refrain—“no attachment, no fear”—that echoes the Heart Sutra.

If this sounds like your cup of tea and you find yourself in the Twin Cities, “Kung Fu Zombies vs. Cannibals” opens tomorrow night at the Southern Theater, and plays Thu.-Sun. through October 27. And get this: it’s five bucks off if you dress as a zombie.